The world’s poorest have the strongest resilience, yet their voices remain unheard

Comment: Those on the frontline of the climate crisis have something to teach the world about climate resilience if they are given a meaningful seat at the table 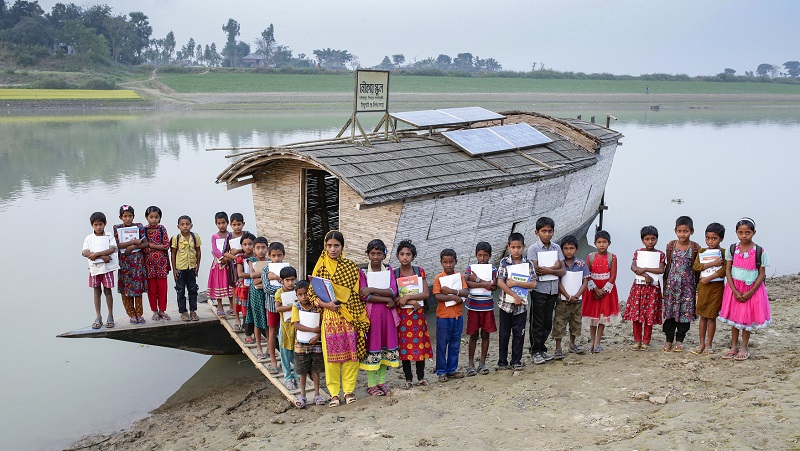 By Sheela Patel and Sohanur Rahman

Historically, the UN’s Conferences of the Parties (Cops) on climate change have been overwhelmingly focused on cutting emissions, but Cop26 felt different.

As Cop president, the UK made adaptation a priority, establishing a two-year Glasgow-Sharm el-Sheikh work programme on a global adaptation goal and a target to balance adaptation financing with mitigation financing by 2025. There was substantial participation on behalf of the adaptation community, albeit largely online and outside the negotiating rooms.

These conversations have carried on, for example at this week’s online Gobeshona Global Conference, creating opportunities to make progress before Cop27 in Egypt.

The rising significance of adaptation is underpinned by one key fact: the impacts of climate change are here now and set to escalate. However, despite feeling hopeful at times, the most recent climate negotiations still failed to match words about loss and damage, resilience, and adaptation with actions to actually protect the most affected people and areas.

While negotiators have only belatedly started thinking about how best to create the conditions to build greater climate resilience, communities, including our own, have already been doing this for decades.

In Bangladesh, we have been forced to build our resilience by enduring yearly cyclones among other natural disasters and to develop survival techniques like growing vegetables on water, rainwater harvesting, water ambulances, floating schools, and procedures for early warning and evacuation.

Similarly, shack-dwellers globally have learned to build and rebuild their homes in the face of climate disasters. For many the question is not whether the roof over their heads will blow away, but rather when, and how often.

The injustice of climate impacts means the strongest resilience – ‘survival resilience’ built on compound crises – is developed by the world’s poorest communities. It is often informal and deeply local. Crucially, it is not fixed or static, due to the unpredictability of climate change impacts. International agreements require mechanisms that reflect this uncertainty.

They must also ensure that practical, local techniques and indigenous practices are coupled with external intervention. With only 10% of climate finance currently supporting locally-led adaptation, and just 2% reaching the most affected communities, we remain a long way from giving those experiencing the most significant climate-related disruption what they need.

Yet, the voices of those with the most knowledge to contribute to the discussion on adaptation and resilience continue to be pushed to the fringes of the Cop process and often go unheard worldwide. How can negotiations about the future remain inaccessible to those with the biggest stake?

A summit cannot truly deliver positive outcomes for youth, women, and indigenous people without their meaningful participation, yet at Cop26 they were outside being pushed back by police while big corporations were in the delegations.

The current system, based on the burning of carbon, resource extraction, exploitation of people in informal work and settlements, and concentration of vast amounts of capital, operates by locking out those who need the system itself to change for their survival. If the voices of those people had been given as much importance as those of 500+ fossil fuel lobbyists, Cop26 might have had a very different result.

But the UN’s daily subsistence allowance for delegates from poorer countries is provided only until the official final day of negotiations, forcing many to leave before talks conclude. Covid-19 further compounds the inaccessibility of climate talks for people from the global south: most of our colleagues have yet to be vaccinated and none of us could afford to be stuck for weeks if we test positive at a conference.

While the media may have labelled Cop26 ‘the most inclusive Cop yet’, that does not mean it was meaningfully inclusive. Recent reports of Egyptian hotels raising their prices for Cop27 suggest the same mistakes risk being repeated.

We – the global south – have been forced into adapting now, not in a year or two. Delays of even one year mean more people lose their homes and livelihoods, fewer children go to school and more girls end up in child marriage.

Developed nations and the media must change how they talk about climate change and the people it affects. It is not just a scientific issue. It is about jobs, homes, health, and survival. It is about people fleeing their countries as climate refugees.

If there is one thing Covid-19 has demonstrated, it is that the world is capable of rapid and widespread change in the face of a crisis and that solutions start with the community. If we take this approach with climate change, we might just start moving forwards.

Sheela Patel is the founder and director of the Society for the Promotion of Area Resource Centres (Sparc) and Sohanur Rahman is a youth activist from Bangladesh.