Three ways the EU, China and US should deepen cooperation on climate in 2021

Comment: Building coalitions on green finance and carbon pricing and putting climate at the heart of diplomacy will allow the big three emitters to deliver on net zero goals 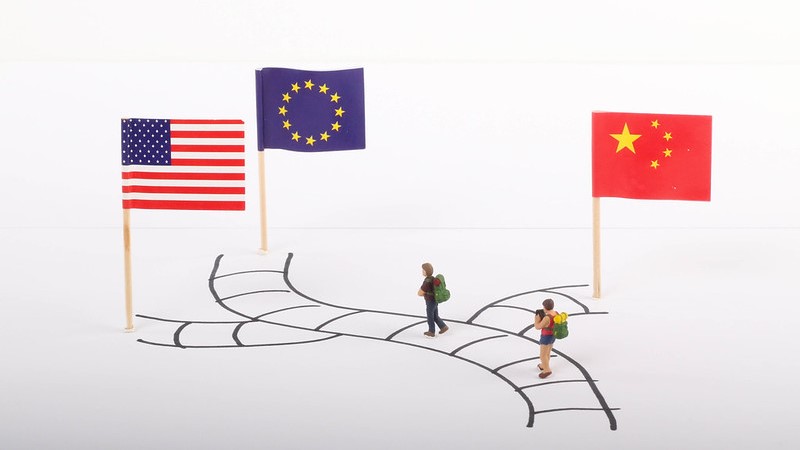 To reach their full potential as climate leaders, China, the EU and the US will need to take part in three-way cooperation on climate action. (Photo: Marco Verch/CC BY 2.0)

With the recent climate action announcements of the Biden administration, the US joins China and the EU in the club of superpowers committed to climate neutrality.

To reach their full potential as climate leaders, the three global players will need to take part in three-way cooperation. They influence economic pathways – and therefore emissions trajectories – far beyond their national borders.

And some of the key decarbonisation policies need smart and proactive international cooperation to withstand the rough winds of geopolitical competition.

We suggest three areas for intensified trilateral dialogue between the US, China and the EU in 2021 to kick off a global transformation towards net zero and to make economic recovery post-pandemic work for the climate.

The transition towards climate neutrality and climate resilience as well as safeguarding our natural system requires shifting trillions of dollars in financial flows and mobilising the private sector. The EU, China and, to a lesser extent, the US have taken initial steps to transform the financial sector.

The EU is developing its taxonomy regulation for sustainable activities. China has been working on a national green finance policy framework, has issued guidance on climate finance overseas and is promoting nature-based solutions. The Biden administration has promised to push environmental, social, and corporate governance (ESG) reporting and climate risk disclosure.

The three countries should accelerate their domestic efforts and work together on internationally accepted rules to make the global financial landscape and architecture compatible with a net-zero future.

First, they should all join existing initiatives such as the Coalition of Finance Ministers for Climate Action, the International Platform for Sustainable Finance and the Network for Greening the Financial System.

In addition, they should establish a common working framework on green and sustainable finance and build a coalition to move the issue forward in international fora. The G20 is a unique platform for this, as its members account for 80% of energy-related CO2 emissions.

Building on previous work, such as the Green Finance Study Group set up by the Chinese 2016 presidency, the big three emitters should work with the UK and other upcoming presidencies to build a strong ‘finance for climate and energy transformation pillar’ under the G20.

There, they have the ability to bring environment, finance and energy ministers together and bridge different work streams and political tracks to drive progress.

Decarbonisation prospects around the world hinge on the trade diplomacy, international connectivity and business agendas of private and public actors from China, the EU and US.

While the three powers try to secure their perceived core interests and spheres of influence, trilateral dialogue could tremendously improve the chances of climate goals gaining an equal weight to other imperatives of economic diplomacy.

The lack of coordination in a competitive geopolitical setting is much more likely to cause a high-carbon lock-in as it is the current default option for most sectors, with the possible exception of electricity.

China’s Belt and Road Initiative (BRI) is a prominent case in point. An overseas investment strategy that mixes foreign policy and economic aspirations, it will affect the decarbonisation prospects of countries around the world through infrastructure finance.

In the energy sector, BRI investments have been fossil-heavy (though renewables have been spreading in the portfolio as well). Importantly, it also impacts sectors such as international transportation and energy-intensive industries that are yet to find scalable decarbonisation solutions.

Europe and the US are pursuing their own connectivity agendas in Asia and Africa by investing in transport links, digital and energy networks, which raises questions of climate compatibility.

The three powers need to start a dialogue on how to make sure their respective overseas economic agendas do not threaten the goals of the Paris Agreement. Increasing the transparency of the climate impacts of these plans and exploring comparable standards for sustainable investment and trade could be part of this dialogue.

While systemic rivalry thinking hardly subsided overnight, the new US administration could provide more openings for such conversations.

Growing trade competitiveness between China, the EU and the US and carbon leakage concerns are some of the main barriers to more ambitious domestic policies such as carbon pricing.

In other words, businesses should not transfer production to countries with laxer policies due to increasing costs on pollution at home, as this could drive emissions globally.

As a possible solution, a carbon border adjustment mechanism is being discussed intensively in Europe. It is a form of carbon pricing on imports that aims to compensate for potential disadvantages from international competitors which do not have to pay for emitting carbon.

As China and the US are crafting a new policy trajectory to deliver their net-zero ambition, all of the three powers are – at least in theory – concerned about carbon leakage. This carbon border tax discussion can be used strategically to forge a three-party dialogue on a ‘climate ambition club’. This could see the big three, as well as other major players, join forces for increasing climate ambition domestically.

In addition, they can use the revenues raised by a joint carbon border adjustment mechanism to further invest in decarbonisation and build resilience in disadvantaged communities domestically and in developing and emerging economies.

This club might start with focusing on sectors such as the steel or cement industry. End product taxes of goods and services could be an alternative option.

Domestically, a ‘carbon club’ may have a positive effect to justify ambitious climate policy measures. Globally, it could become a powerful new instrument for mobilising major emitters to fill the financial gap for the net-zero transformation.

In 2021, China, the EU and the US can use collaboration on these agendas as a springboard to increase climate ambition. They should set a clear path towards domestic neutrality goals while kicking off an irreversible net zero transformation globally.

The leader’s summit announced by US president Joe Biden on 22 April offers a chance for joint initiatives. In addition, fora such as the G20 or the Major Economies Forum on Energy and Climate Change, initially established under the Barack Obama administration, are complementing platforms to the global climate negotiations where the groundwork can be carried out.

Finally, the three players need to embrace network diplomacy beyond the official channels and (online) summits, in particular business stakeholders and civil society need to be involved in all of these agendas.

Dennis Tänzler is director and head of programme Climate Policy, Lina Li is a manager of the Carbon Markets and Pricing programme and Daria Ivleva is a senior advisor of the Climate Policy programme at adelphi. The views expressed are those of the authors and do not represent the institutions they work with.