US ‘no position’ on how much humans are changing climate, says Trump envoy

George David Banks speaks with Arthur Neslen about keeping the US in the Paris deal, morale in the state department and why he said he didn’t know what 2C means 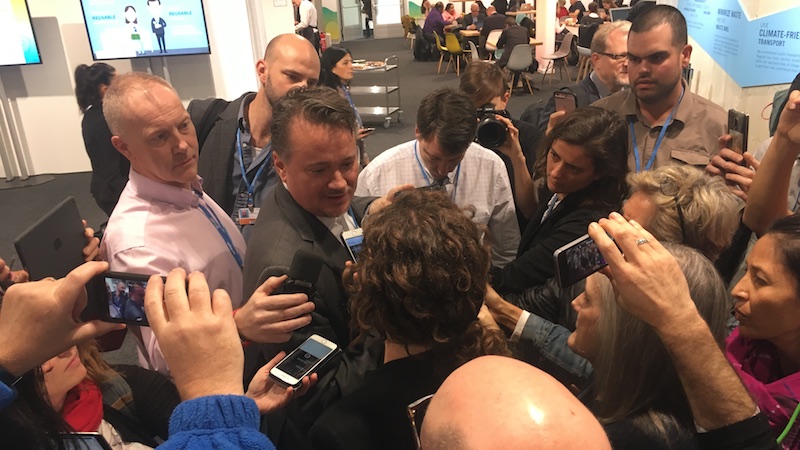 His appearance at negotiations to lay down rules for the Paris Agreement, which Trump wants to leave, attracted widespread opprobrium.

But few White House officials understand international climate policy as well as Banks. The free market advocate served as a special advisor on international climate affairs under president George W Bush. After Bush decided not to ratify the Kyoto Protocol, the precursor to the Paris climate agreement, Banks designed the ‘major economies forum’, a meeting that became a key driver of climate ambition during the Obama presidency.

Climate Weekly: The week’s climate news, in your inbox

In Bonn, he headed a panel with US energy industry executives that was met by a mass walkout. After that talk, he told Climate Home News that he didn’t know what the 2C target – a widely used benchmark for dangerous warming – meant. (He clarifies that here).

He was keen to present the White House as reasonable and those who dismiss whole industries – such as coal – as ideological and irrational.

Appearing for an impromptu visit to the media centre the next day, he appeared harried – face reddened, surrounded by press packs and activists, trying not to spill his coffee, gamely sparring with interlocutors who saw him as an envoy of evil. In conversation a few minutes later, he was relaxed, responsive and bright.

Banks is no enthusiast for climate action and wouldn’t be drawn on the human contribution to climate change. But, privately, he does not question the science and was part of a group of advisors who tried to convince the president to stay in the Paris deal. That conversation, he told Climate Home News on the sidelines in Bonn, was now over inside the administration and could only be continued by foreign leaders.

AN: Can I just ask one more time about the 2C, I can see you don’t want to answer the question. Maybe the White House doesn’t have policy on this?

GDB: Yeah, so that’s funny you know because this is an issue we talked about in the Bush administration too, right? And I really feel that people, people were I guess interested in my response.

I don’t know what it means. But from a policy perspective and how you chart a pathway forward for technologies, I don’t know what it means. And I’ve never actually participated – maybe I’m not in the right discussions – but I’ve never actually participated in a discussion where someone is using the 2C target to figure out when they need to deploy this or that technology.

It’s always been kind of a lofty target out there. But from an administration perspective, we haven’t discussed it. It was not part of the Paris discussion we had.

The argument would be it’s the level above which the effects of climate change become catastrophic, 97% of the world’s scientists agree with this perspective and it is an imperative because theres no manufacturing or competitiveness on a dead planet.

Of course, of course. But I still don’t know what it means from a policy discussion perspective.

What it means is taking that into account for the energy sector. I mean you said that human activity contributes to climate change. Can you quantify that?

Yeah how much of climate change do you think is caused by human activity?

First of all, the administration doesn’t have a position on it, right? But if you were to ask me personally, I’d say I can’t give you a percent, but I know the percentages people throw around but I don’t know.

Oh quantify it that way?

The administration doesn’t have a position on that. [In November, the White House endorsed a report produced by 13 federal agencies, which concluded more than 90% of current climate change had been caused by humans – ed]

A lot of people in the EU – senior people – that I’ve spoken to believed that in the run up to the Rose Garden speech there was an attempt to land the president on various sides of the argument – stay in and try to renegotiate or leave. The very strong perception in Brussels is that you were trying to persuade the president to stay within Paris.

The president heard from a lot of different people. I was really surprised by how many discussions he had on this. He was lobbied by heads of state across the board – the chancellor, the prime minister, former vice president Gore. He had at least one or two conversations with him, at least.

And he heard from the people who were really concerned about it and it was a campaign promise that he made. And I think that during the campaign it was my understanding and, looking at his speeches and seeing what he said, he spoke from a manufacturing piece [about] the impacts of the agreement, including the Obama NDC [nationally determined contribution]. He met the campaign promise. It was important to keep that promise. And again he was really concerned about the NDC.

There’s a Ukrainian proposal you probably won’t know about. It’s to create an intermediary layer at the Cop [conference of parties] between the nations and the NDCs, and within that, energy corporates would be invited and given direct participation in the talks.

The idea from Ukraine’s side would be to stimulate clean coal technology transfer deals. In so much as it meets the US agenda in terms of manufacturing industry – you know keeping coal jobs, expanding coal jobs, and the ‘clean coal’ industry – does that idea have merit to you?

Who should it be led by?

So in that sense, how could the Cop process be reformed so as to create more favourable conditions for the US to participate?

Well, we’re going to stay in the framework convention.

I was talking about the Paris Agreement.

Ah right, the Paris Agreement. I think that’s a decision made by the president.

Are there any ideas that you are working on while you are here?

What would be a successful outcome of this Cop for you?

We want to make sure that we do what we can to avoid bifurcation, period, right? Differentiation. It’s a fundamental flaw of the framework convention. You know, because it divides up – it’s the world in actually, I think we ratified it in 1992. Did it come into force in 1992?

But you know the conversation started in the late 80s right? So it’s a world view, its like a cold war view of the world when we’re living in a global economy. If you don’t have a graduation mechanism where companies can move backwards and forward, my goodness! Parts of central and eastern Europe should have been developing countries, right? After the collapse of communism. And South Korea? Israel? I mean: come on, you know?

So what about the argument of historic responsibility? What about the argument that America, Britain, Russia industrialised and got the benefits of using coal and fossil fuels and they created the problem – or contributed to the problem – and now the developing world would be punished for that if they were given exactly the same targets before they’d even started to industrialise, some of them.

I think it’s a good question. I would say and by the way I’ve been asked this question around the Paris Agreement – people saying ‘if China does more, will that bring you back in?’ My response to that is that’s not the kind of conversation that we want to have. We’re not asking developing countries to accept reduction targets in exchange for us having a reduction target right?

But when it comes to reporting and transparency and accounting, a country like China should not be treated differently. Now for some poorer countries or the poorest countries, that might be a different situation where they actually need capacity building in order to be able to avoid emissions. But you could also make the argument that it really doesn’t matter. It doesn’t matter if Mozambique reports its emissions, from a global point of view. Because they don’t really matter. But it matters if China does. So yeah, I think it answers your question.

One last question, some people have raised questions about US climate negotiators here. It’s been suggested that morale is low among some of them. Is that true?