Six protesters were killed in the Mandsaur district of Madhya Pradesh in June. Meet the bereaved families driven to despair by erratic weather and a tough market 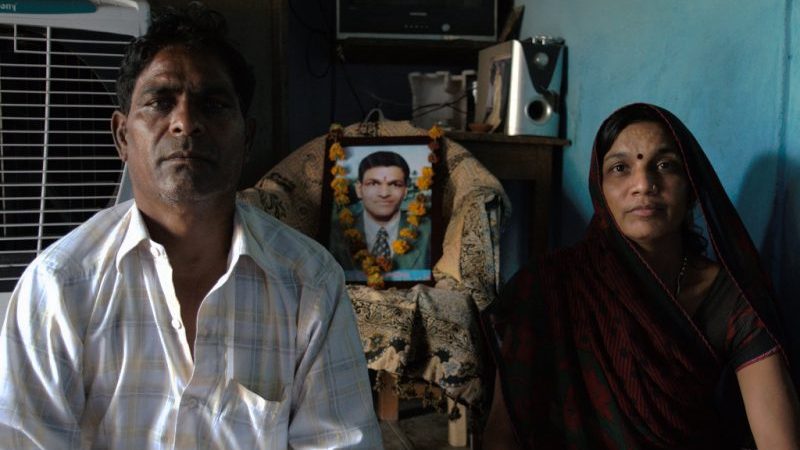 Dinesh Kumar and his wife Alka Patidar with a memorial portrait of their son Abhishek Patidar, who was killed when police fired on a protest in Mandsaur on June 6, 2017. He was 17 years old (Photo: Huizhong Wu)

By Huizhong Wu in Mandsaur

Abhishek Patidar was 17 years old when he died. A farmer’s son, he had planned on becoming a doctor.

“Abhishek studied in the 11th grade,” said his mother Alka Patidar, proudly. Her eldest son had only finished 8th grade before he started working the family farm.

Abhishek, the youngest of four children, looks like his mother. His eyes follow the same curvature; his skin is the same shade of tan. Abhishek was killed at a protest on 6 June, 2017, when Indian police opened fire on the crowd.

India’s farmers are in crisis. Their frustrations, simmering quietly after the harvest, became palpable in a 10-day long protest in June. Thousands of farmers in the Mandsaur district of central India’s Madhya Pradesh had turned up in the towns of Piplia Mandi and Bahi Phanta to demand fair prices for a season’s worth of work. Abhishek went along with several other young men from his village.

The protests started out peacefully, but turned ugly a few days in, when a scuffle broke out between better-off business owners in the area and debt-ridden farmers. On the sixth day, the violence climaxed when police, trying to control the crowd, fired their weapons. Five protesters were killed on the spot and a sixth man later died of injuries sustained in the clash.

Almost immediately, the district was put on lockdown, with police enforcing a curfew and shutting off internet services in the area. In an attempt to prevent further unrest, the state government has promised to purchase the year’s crops at a higher price than farmers would get on the open market.

A month after 6 June, farmers again took to the streets to remember the six deceased. Local officials forbade the gathering to be held in the village where the five farmers were killed, out of worry that it would again stir up violence.

For now, the villages in Mandsaur district are quiet, but anger lingers in the aftermath of the protest. 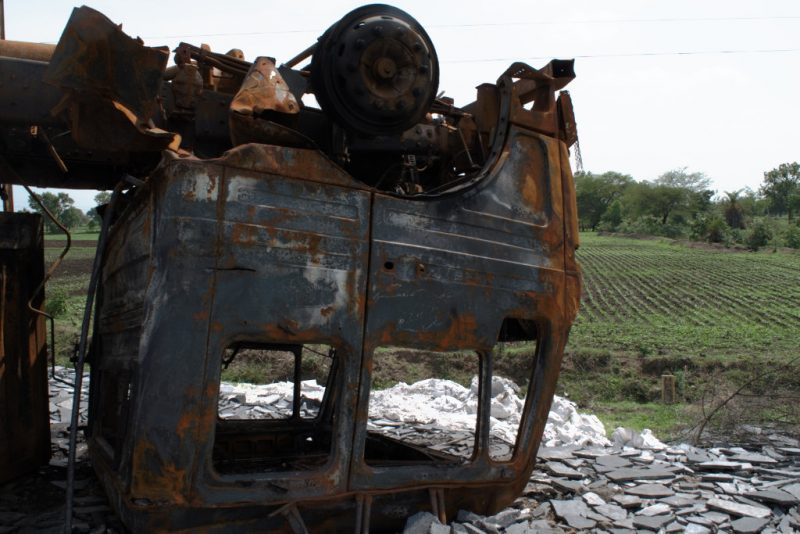 2017 proved brutal for India’s small farmers. Many had breathed a sigh of relief at a successful harvest after two years of drought and unseasonal weather. In fact, the 2016 monsoon was good enough that there was a bumper crop.

The result, however, was a glut of produce that depressed prices. Crops like onions were selling for as little as one rupee per kilogram ($0.01).

“The price that we were getting has been cut in half, the price of soya bean as well as fenugreek dropped,” said Unkar Singh, a farmer from Mandsaur, whose son had participated in the protests. “At the same time, the cost of compost, electricity and labour is increasing. The cost of farming is more than what we earn.”

It was this that made Madhya Pradesh’s farmers take to the streets.

Size has a lot do with the Indian farmer’s financial problems. About one third of India’s 90 million farming households own less than 0.4 hectares or an acre of land. An average small family farm in the US, for comparison, is 231 acres. On this scale, a farmer makes just enough money to survive. A national survey found that the average monthly income for an agricultural household was 6,426 rupees ($98) in 2012 and the average consumption expenditure was 6,223 rupees ($95).

Most small-time farmers do not earn enough and do not have enough cash flow, said Harish Damodaran, the rural affairs editor at The Indian Express, a national newspaper. That balance could easily be upset by the smallest change in their livelihoods, like unseasonal rains or a drop in crop prices, or a surprise currency move like demonetization.

When India’s prime minister Narendra Modi overnight made the country’s two largest denominations of money obsolete in November 2016, he also ended up damaging the credit of rural markets that depended on cash.

“Most of the produce trading in India is in cash and most of it is non-taxed and it’s below the radar,” said Damodaran. When those notes were made worthless, the cash and credit ran out. “Most farmers don’t have the capacity to play the market,” he added.

In the short term, the Madhya Pradesh state government applied a balm by offering to purchase the crops at a higher price. After a few years of bad crops, several Indian states have started offering loan waivers, which will relieve the debt of millions of burdened farmers. Yet most know it is not a sustainable solution – and farmers themselves find it disempowering to depend on the mercy of politicians.

“If we get reasonable rates for our crops then we can pay off our debts,” said Virendra Singh Chandrawat, a farmer from Mandsaur. “There is no need for loan waivers.” 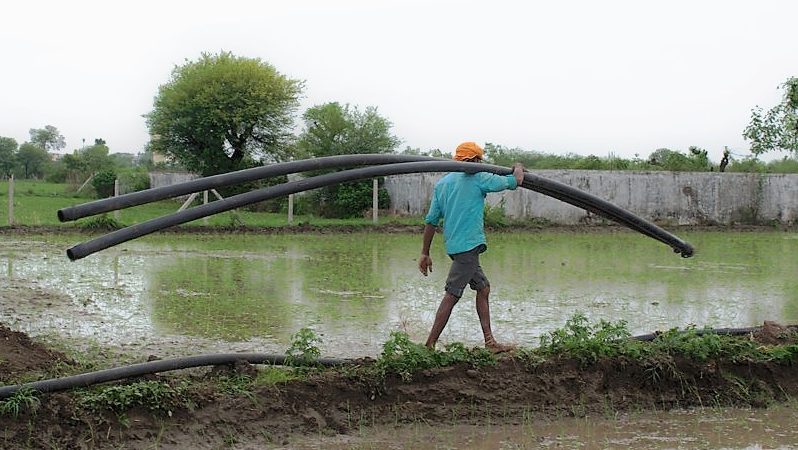 Farmers know, despite their distance from the centers of research and knowledge institutions, that the climate is changing.

More than 25 years ago in the village of Chillodpiplia, just a few kilometers down the road from Piplia Mandi, people used to grow sugarcane. It was a local industry that employed a lot of people turning the harvest into jaggery, a type of raw sugar, said Devbai, a farmer whose son was killed in the protests. But in the years since, the rains have become less bountiful and more erratic. There’s not enough water to support the sugarcane. Today, almost everyone in the village plants soy bean, a crop that is exported.

Crops in India are heavily dependent on the monsoon rains for water, particularly the kharif – or second planting season – crops. Each year, economic analysts pore over the Indian Meteorological Department’s monsoon forecast with zeal before pronouncing on the national economic outlook.

In the 2014/15 season, farmers who planted wheat lost about 40% of the crop to unseasonal weather. The national government declared it a national disaster, estimating the economic loss at $1.5 billion.

As global warming ramps up, scientists predict average rainfall will increase 15-24% by the end of the century, but not in a uniform way. Erratic weather like that which has so disrupted farmers’ harvests in recent years – two years of drought; three years of hailstorms and unseasonal rains – is to be expected.

Systems that are meant to shield farmers from this volatility are inadequate. Farm insurance has been available for a few decades in India, but according to research from the Center for Science and Environment, only about 20% of all of India’s farmers have access to it.

And for those who do have access, the prime minister’s revitalized national crop insurance scheme, launched in 2016, only offers small payouts. “The cost of sowing the crop, cutting it and then taking it to the market is 10,000 rupees for just one bigha of land,” said Devbai. “The government gives a compensation of 200 rupees up to a maximum of 2,000 rupees.” She had claimed twice through the scheme.

Report: G7-backed insurance ‘too little, too late’ for Malawi drought

Farming in India is not a lost cause. That’s the driving faith of the founders of eKissan, a non-profit organization that brings technology into the farming space.

Farmers lack the necessary information to make good choices, said co-founder Srikanta, who uses only one name as is custom in parts of India.

His organization created an online platform in India’s southern state of Karnataka to connect farmers with each other and agricultural experts. Through a tablet-based program, farmers are able to get fast responses to questions about everything from the weather to which fungicide to use from knowledgeable volunteers.

“If you’re able to bring a little bit of efficiency to the system and join the dots, then the system will fix itself,” said Srikanta. His organization is planning to release a Hindi-language version of the program for the northern and central parts of the country. It is also available as an app.

One of their earliest successes, said Srikanta, came from telling farmers about planting green chilies as an “intercrop”. The chili pepper, which takes a shorter time to grow than other crops, can be planted in between the two main seasons. As a result, the farmers who did this added 10-15% to their income, Srikanta said.

Still, nearly three quarters of farmers’ children want to leave the agricultural sector, according to a survey conducted by the Centre for the Study of Developing Societies. Their parents feel the same, saying there is no future in farming.

As the Indian economy grows and expands, it has a large opportunity. The country has one of the world’s youngest populations, according to the United Nations Populations Fund. It will also have the world’s largest working age population.

To seize that chance, education and training in technical skills are needed on a vast scale. Recognizing gaps in provision, the Indian government launched ambitious programs in various industries to train 500 million young people by 2022.

She resembles the ambitious young women you find in any of India’s cities. She has long shiny hair tied in a neat ponytail, wearsglasses and speaks in a clear, educated Hindi. She is the eldest child in her family.

Her father, Kanhaiyalal Patidar, had told her to go forward, to “get a job,” to “become something,” because he didn’t want this life for his child.

Unlike Abhishek, she has a chance.