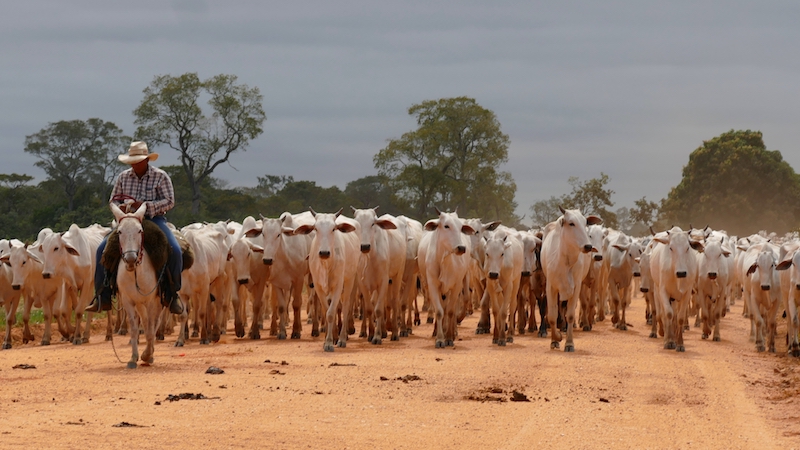 A Pantaneiro cowboy leads a herd of cattle in Mato Grosso, Brazil, where indigenous peoples are locked in a battle with farmers over land (Photo: Bernard Dupont)

Donald Trump is not alone in choosing collaborators seemingly at odds with the jobs they are given in government.

While the US has climate change denier Scott Pruitt leading the government’s environmental protection, in Brazil, the new head of the ministry in charge of demarcating indigenous lands believes that it is not up to the federal government to do that.

Lawmaker Osmar Serraglio, who took over as justice minister on 7 March, has sent shockwaves through Brazil’s indigenous and environment movements by calling on Indians to stop demanding land rights and announcing a freeze on the process of the recognition of claims.

Article 231 of the 1988 Constitution establishes that indigenous peoples have “original rights over the lands that they have traditionally occupied” and it is the government’s duty to mark out and protect these claims. In January, the responsibility for this process was shifted from the national Indian foundation, Funai, to the justice ministry.

“Our assessment is this minister was picked with the sole purpose of withholding land demarcation,” said Sônia Guajajara, the national coordinator of Brazil’s Association of Indigenous Peoples (APIB), in a phone interview with Climate Home. “In reality, he is working so the land will be given to [the farmers]. We are in a war moment.”

The government officially recognises indigenous rights to 13.8% of Brazil’s territory, or 1,173,106 square kilometres (almost five times the area of the United Kingdom). Most of this is in the Amazon. As well as providing security and tenure, granting indigenous land tenure has been shown to drastically reduce deforestation rates.

There are many more outstanding claims. About one third of identified indigenous lands are still in process, according to Márcio Santilli, a former president of Funai.

In regions such as Mato Grosso do Sul, midwest Brazil, many such claims are disputed by cattle ranchers and soybean farmers who occupy the land.

In his fifth parliamentary term, Seraglio is a prominent member of the “beef caucus”, a group of legislators who represent agricultural interests. Disputes over land between farmers and indigenous peoples in Brazil are as old as the first European settlements.

A member of the ruling Democratic Movement party, 30% of Serraglio’s 2014 election campaign contributions came from agribusinesses. He is one the main advocates of PEC 215, a proposed constitutional amendment that would shift the power to demarcate indigenous land from the executive to the historically conservative-controlled Congress.

In the past few years, opposition to PEC 215 has galvanised the indigenous movement. The current demarcation process is fragile and slow, they argue, but there are more chances to be heard in the executive than in Congress. The beef caucus has 207 out of 513 lawmakers in the lower chamber (Congress), according to Agência Pública. Indians, who represent only 0.4% of Brazil’s population, do not have any representatives.

Along with the “Bible caucus” (evangelical Christians), the beef caucus is crucial to the political survival of President Michel Temer, who took over last May pending the controversial impeachment of Dilma Rousseff. He faces multiple corruption allegations and has very low approval rating (only 10% of Brazilians support his government, according to a recent poll).

“The ruralist caucus is exceptionally articulate and organized and will continue to be very powerful as long as Brazil relies on commodity production to grow and/or to balance its external accounts. There is nothing wrong about that, as it is healthy for ruralists to be represented in the public dialogue,” sociologist and political commentator Celso Rocha de Barros told Climate Home in an e-mail.

“In the current situation, the risk is that the balance of power has shifted very sharply to the right. The Temer government is full-blooded conservative. We run the risk of watching the ruralist agenda, which deserves to be debated, implemented without being confronted, as the left is now too weak: it lost the Executive, it’s isolated in the Legislative and has not yet found a new voice in public debate,” said Barros.

Disputes over indigenous territory are just part of the farming lobby’s campaign against land use restrictions. On 21 December, Temer ratified a provisional amnesty on dozens of farmers illegally occupying 305,000 hectares in the National Forest of Jamanxim, in the Amazon state of Pará.

Lawmakers from the beef caucus are also under negotiation with the federal government to reduce protection across 10,763 sq km (half the size of Wales) of land in the state of Amazonas.

In both cases, the protected areas are next to federal roads, which facilitate illegal logging and the replacement of the forest by pasture.

Deforestation in the Amazon rose 29% from August 2015 to July 2016, according to government-run Brazil’s National Institute for Space Research (INPE) despite the country’s biggest recession in history. That equates to a loss of 7,989 sq km of forest.

For Santilli, now an adviser for environmental NGO Instituto Socioambiental, Brazil is moving away from its climate pledge to reduce emissions 37% by 2025 compared with 2005 figures. About two thirds of the country’s carbon emissions come from deforestation.

“When our goal was established, it was very modest, especially for 2025, as it is very close to emission levels Brazil had already reached in 2012. Since then, however, we are moving away from our goal due to the increase of deforestation,” said Santilli in a phone interview.

“What is at stake in Brazil is the dispute over what’s left of the territory. The problem is not the Indians or biodiversity… It’s a struggle for the land, and the negative signs can be seen in all the policies related to that.”