One week to save UN climate change talks from Trump

As the eyes of the world look to Marrakech for a signal of the Trump effect, can diplomats show that the climate is bigger than one man? 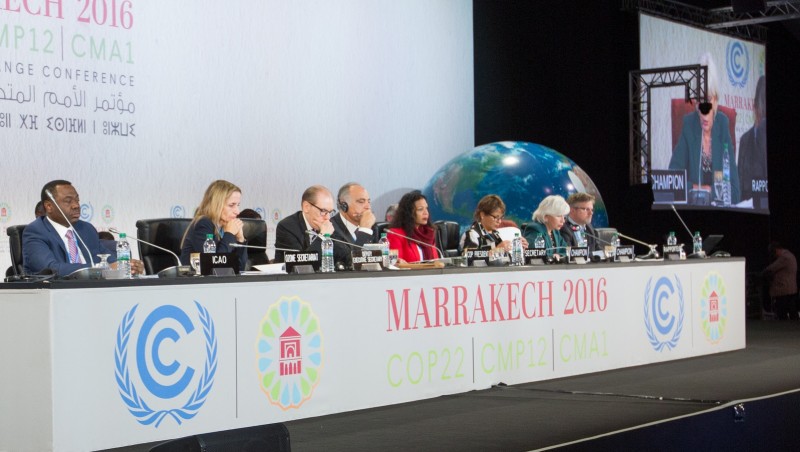 By Karl Mathiesen and Ed King in Marrakech

Climate diplomats in Marrakech are working furiously behind the scenes to send a message to Donald Trump that the world remains a place of pluralism and cooperation.

The US president-elect has threatened to withdraw from the Paris climate agreement and to reverse much of the work done by Barack Obama on curbing carbon emissions at home.

Reports emerged on Sunday morning that Trump’s team are looking for “quick ways” to leave the deal, which was agreed by 195 countries last December and came into force on 4 November.

What president Trump actually does, remains to be seen. But after the dismay and deflation of Wednesday morning, diplomats in Marrakech appear to be steeling themselves to defend the work of decades.

“We need something to emphasise we believe in multilateralism,” UN climate champion and French diplomat Laurence Tubiana told Climate Home in an interview on Saturday.

It is a unique situation. A major UN deal, still drawing its first breaths, has had its most influential actor suddenly and utterly reverse its position – in the middle of a major round of talks.

This was meant to be a procedural conference that sorted through the wonkish, technical issues of implementing the Paris agreement – which was agreed last year. Now, Trump’s election has raised the stakes immeasurably.

The United Nations Framework Convention on Climate Change (UNFCCC) and the Moroccan government, who are running the talks, have converged on a message that the process is bigger than one man or even one country.

Answering a question from a journalist on Saturday about the effect Trump might have on the climate talks, the UN’s climate chief Patricia Espinosa emphasised global support for carbon cuts.

“The Paris agreement carries an enormous amount of weight and credibility and it has been signed by over 190 and ratified by over 100 countries and what we are seeing here is a lot of enthusiasm and a willingness to bring the process further,” she said.

“If one party decides to withdraw that it doesn’t call the agreement into question,” Moroccan foreign minister Salaheddine Mezouar told reporters.

Week 1 #COP22 review now on our @facebook site, including Trump + @lizgallagher tips on not getting locked in a loo https://t.co/nDG0l7mNqF

But with the world’s press searching everywhere for signs of a Trump-effect, the conference must finish next week a resounding success or else feed the impression that Trump could freeze global cooperation.

That means going further than the original remit, said Liz Gallagher, a senior associate at the London-based E3G think tank.

“What we need to see is both the negotiations do better than we expected and also have ministers and heads of state make high-level political statements,” she said.

“[After Trump’s election] I think there is an understanding that it is very important to send a very positive signal of continued commitment to the Paris agreement,” said Kaveh Guilanpour, principal climate advisor to the Marshall Islands. “That is what we are all trying to do here at COP22.”

To that end, conference president Mezouar began circulating a draft document which was leaked to the the Business Standard on Saturday. The “Marrakech call” commits signatories to go further and faster than their current climate pledges.

Analysis: How could the Trump presidency impact global climate policy?

But mustering a statement strong enough to counter the unilateralism of Trump will not be easy. At UN climate talks, rapid political consensus is a rare bird.

Indeed, Morocco’s political call has ruffled feathers on its way through. It contains a large number of clauses, which inevitably rubs against the interests of a number of countries. It will need to be simplified in order to gain a plurality of support, said Gallagher.

Tubiana, one of the key architects of the Paris deal, said “many countries were a little sceptical about this call or declaration that the Moroccan presidency has in mind”. But she said the conference now must to respond to Trump’s ascent by reaffirming the vital and productive role of the UN.

“Now I think everyone, they agree it will be important to have this strong political movement,” said the French diplomat.

The high ambition coalition, a secretly convened group of countries who broke cover at the Paris talks to push a tougher climate agenda, look set to again play a role next week.

This could be key moment of #COP22. You heard it here first. TdB https://t.co/TOljGU0EAR

On Wednesday, former Marshall Islands foreign minister and convener of the coalition Tony de Brum said the group had a series of announcements planned that would be “key moment” of the conference.

On Friday, the coalition released a quickly drawn up statement, reaffirming that “our commitment to work with the whole international community, including the United States, to tackle one of the greatest challenges of our time”.

Kerry will deliver a major speech after he arrives in Marrakech on Monday. It will be the last time he leads the US delegation at a climate conference. It is likely to be an emotional moment for a statesman who has championed the cause of climate action for years.

Much of the goodwill and momentum he has built is now held in the hands of a man whose capriciousness will at the very least cause the US role at these talks to diminish. If the rest of the world fails to fill that void, it would undo the work altogether.