How could the Trump presidency impact global climate policy?

If Obama Clean Power Plan is stopped, US emissions projections would be significantly higher than in its absence and we will see an increasing emissions trend in 2020s 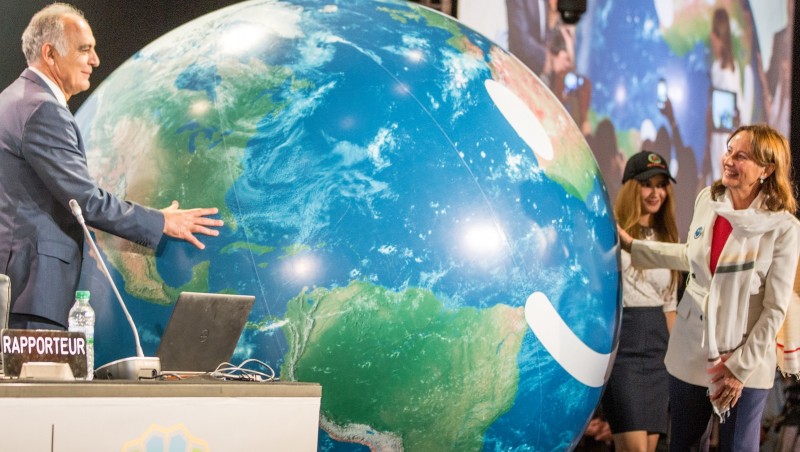 The opening ceremony of the COP22 climate summit (Pic: UNFCCC)

The Obama Administration pushed climate action despite congressional reservations. Under the Climate Action Plan, the US introduced mitigation actions in a step wise manner.

One important piece of Obama’s strategy has been the Clean Power Plan, which requires federal states to reduce their emissions from power production.

The United States would need to fully implement the Climate Action Plan, including the Clean Power Plan, if it is to meet its 2025 nationally determined contribution (NDC) emissions reduction commitment of 26–28% below 2005 levels.

Currently implemented policies including the full implementation of the Clean Power Plan would only reduce emissions by 9% by 2025 below 2005 levels, so even more action is required to achieve the US climate mitigation targets (See our Climate Action Tracker analysis).

If the Clean Power Plan was to be permanently stopped, emissions projections would be significantly higher than in its absence and we would be seeing an increasing emissions trend over the next decade – at around 6% below 2005 levels in 2025.

All eyes are now on the federal states to pursue further climate policies, but the impact on the USA’s overall contribution may be limited.

This means that the climate target that the USA communicated as part of the Paris Agreement process, the “nationally determined contribution”, will probably not be met, and US emissions will remain stable at current levels until 2030.

Meet @myronebell, the man who could be Trump's next enviro chief (#COP21 i/v with @A_Pashley) https://t.co/UmdnTgy3um

On the other hand, the situation seems very different today as the political commitment to the Paris Agreement and its universal support has created a lot of momentum, much larger than at the time of George W. Bush’s Presidency. Other governments than the US have strong roles in leading this process.

Some countries may pursue their national efforts regardless of the US elections, because they have understood that ambitious climate action is in their own domestic interest.

China, for example, will independently of domestic policy developments in the US, further push for renewable energy, reducing coal consumption and supporting electro mobility in order to alleviate their current air pollution problems.

For Germany the outcome of the US election may make it more difficult to agree on a strong and clear long term climate strategy for 2050. Germany was not able to take a decision on its long-term plan before the Marrakech climate conference and may now take even longer to come to such a decision.

In spite of this grave eventuality of no climate action from the new US federal government on the horizon, there is still hope that global greenhouse gas emissions can be reduced.

Technological developments can be triggered by transformative coalitions, smaller groups of countries that actively support a technology, to eventually achieve global scale. We have seen this model work for renewable energy.

The renewable energy agenda was initially supported by a few pro-active countries such as Germany, which brought the costs down to the extent that renewable technologies are now the ‘new normal’ for new power plants in many places in the world.

Similar developments can be seen with electric mobility where Norway, California and, in particular, China are aggressively supporting electric cars. It is fair to believe that these would also become the ‘new normal’ in a few years time.