Time for divestment and oil subsidy campaigns to join forces?

Comment: Investors are less likely to divest if governments continue to prop up the sector with rampant subsidies, aid and investments 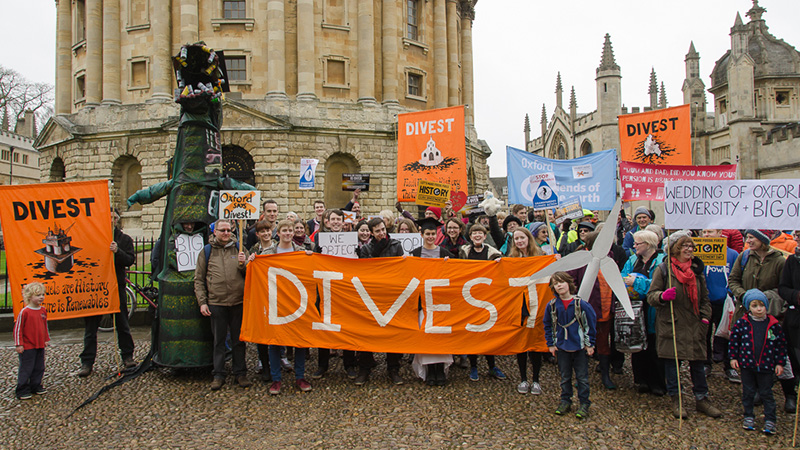 Despite the Paris pledge to limit global warming to “well below” 2C, large amounts of both public and private money continue to flow into the fossil fuel industry.

The Paris Agreement refers only tangentially to those financial flows – even a reference to “high-emission investments” was cut. And only 13 countries mentioned fossil fuel subsidy reform in their national pledges.

Yet outside of the UN climate talks, two different campaigns are shedding light on fossil fuel finance, and pushing to end it. One aims to reform fossil fuel subsidies, with a focus on the G20 countries.

The other is pushing for divestment from fossil fuels, inspired by the anti-apartheid movement of the 1980s, and building on the concept of “unburnable carbon”.

The two campaigns differ significantly in terms of their structure, audiences and effects. But together, they are a perfect “one-two punch” on fossil fuels, hitting them from the top and the bottom at once.

In fact, while the two movements emerged separately, they are closely interlinked, and will be most successful if they recognize they are natural partners.

Fossil fuel subsidy reform gained global momentum in 2009, when the G20 countries pledged to “phase out over the medium term inefficient fossil fuel subsidies”. Since then, it has been embraced in several other contexts, including the UN Sustainable Development Goals.

Most recently, the G7 governments even introduced a deadline, committing to end fossil fuel subsidies by 2025.

Spurred on by low oil prices, many countries have sought to reform or reduce their fossil fuel subsidies, from India to Saudi Arabia.

Divestment, by contrast, has emerged as a grassroots movement, often involving students who push their universities to divest from fossil fuel companies.

Although the idea has received support from high-level figures such as World Bank president Jim Yong Kim and by Mark Carney, the Governor of the Bank of England, no major international body has so far committed to divestment.

Unlike with fossil fuel subsidies, the G20 has only asked the Financial Stability Board to “explore” the financial risks arising from climate change.

The World Bank has not entirely divested from coal, though it will finance new coal projects “only in rare circumstances”.

Yet more than fossil fuel subsidy reform effort, it is the divestment movement that may be making the biggest impact in the long run, by changing the public discourse and extending the call to climate action across the wider global economy and society.

The divestment campaign has made it clear that all sorts of financial actors, including ordinary people with savings, are currently funding runaway climate change.

It has found supporters among hospitals, charities, faith groups and universities. Step by step, the divestment campaign is gradually changing social norms – persuading people that owning dirty coal or oil stocks is immoral.

But the real strength of the divestment movement is that it reaches beyond the traditional circle of environmental activists.

It has prompted shareholders to ask for more disclosure by major oil companies. It has influenced investment banks and pension funds – most notably Norway’s oil fund, the world’s largest sovereign wealth fund.

It is the first divestment movement to have convinced Wall Street and London that it has a genuine business case – no trivial accomplishment.

For both campaigns to fully live up to their potential, they must acknowledge that they are closely linked.

National governments should lead the way in decarbonizing financial flows through a balanced subsidies phase-out.

They should also steer other public financing away from fossil fuels, including development aid, export credits, sovereign wealth funds, and R&D budgets.

Investors are less likely to divest if governments continue to prop up the sector with rampant subsidies, aid and investments.

Thijs Van de Graaf is an assistant professor in the Department of Political Science at Ghent University, Belgium. Mathieu Blondeel is a PhD candidate in the same department.