Incrementalism or revolution? The question facing Democrat supporters and climate campaigners as they decide between Hillary Clinton and Bernie Sanders 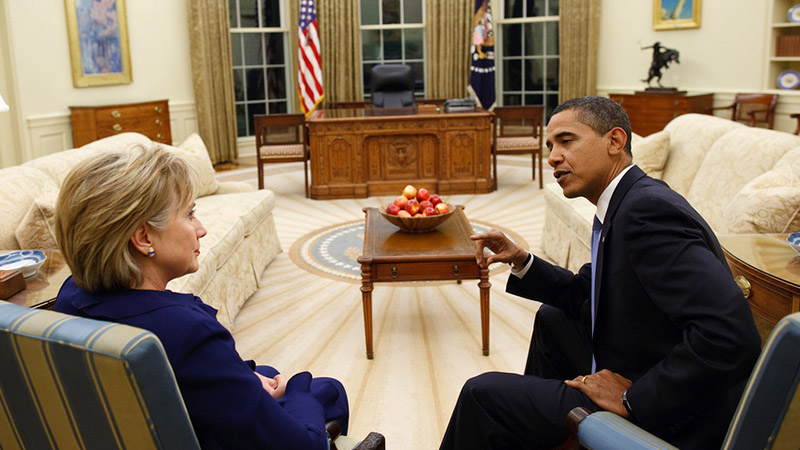 Clinton has insider status and a track record of delivery – but are the results radical enough for the climate crisis facing the world? (Pic: White House/Flickr)

In an earlier blog, I reviewed the important distinctions between Hillary Clinton and Bernie Sanders on climate change. There are many other elements of her record on the issue one could focus upon, but her role in creating the Copenhagen Accord has had vast impact and reflects her pragmatic, and ultimately neoliberal, approach.

As she proudly reminded the world in an early debate on CNN, Hillary was at Obama’s side as his Secretary of State at the fateful 2009 UN climate negotiations in Copenhagen.

They famously stalked the back halls of the Bella Centre to find the leaders of Brazil, South Africa, India and China, forcing their way into the group’s meeting, and struck a deal that utterly changed our global approach to solving the issue.

“I have been on the forefront of dealing with climate change starting in 2009 when President Obama and I crashed a meeting with the Chinese and got them to sign up to the first international agreement to combat climate change that they’d ever joined,” she said last October in a Las Vegas debate with Sanders.

“So, I’m not taking a back seat to anybody on my values, my principles and the results that I get.”

The expert and environmentalist world is still split on whether the Copenhagen Turn was a good one, but given the deadlock in the talks there, there is little doubt that it was a pragmatic one. 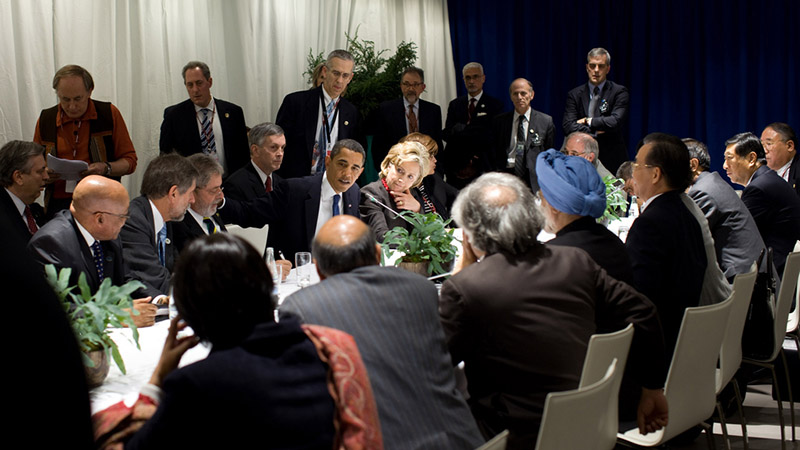 Rather than having targets and timetables to share the burden of emissions reductions based on their responsibility for creating the problem, the Copenhagen approach had nations pledge what they could and wanted to, and those pledges would be internationally reviewed.

This entirely new voluntaristic “pledge and review” approach was only approved by the world’s vulnerable and poor nations because it came with a promise for $100 billion a year from the rich ones, an enduringly problematic number that Hillary Clinton reportedly came up with.

So did Paris show that the Copenhagen approach is working? Yes and no, depending upon one’s perspective.

Models of expected temperature rises from existing policies before the 2015 Paris round of negotiations put expected warming at 3.6 degrees C above pre-industrial levels.

That was associated in major scientific reviews with some likely devastating impacts. The Paris round included national climate plan submissions called INDCs, that have now led some modelers to expect warming of 2.7 degrees C.

That is a major accomplishment for one year of negotiations. But 2.7 degrees C is still far above safe levels, especially for the most vulnerable nations, which includes low-lying island states and drought-prone regions without irrigation.

Even more troubling, these models estimate this level of warming with assumptions past the pledged endpoint (2025 or 2030), including some estimates that cannot be called likely, such as deep negative emissions later in this century.

That is, whether one sees the Copenhagen/Paris Turn as a success depends largely upon one’s faith in unproven and unlikely technology and its adoption, in politicians implementing aggressive policies, and in citizens and corporations adopting the best technologies en masse.

At the behest of terrified poor and island countries, in Paris the nations of the world agreed that it would be far safer to aspire to stay below 1.5 degrees C.

To stay below those levels will require sharp emissions reductions right now, far sharper than those proposed by either candidate. But Sanders’ approach is markedly more aggressive.

This is the core issue that divides the two candidates and the climate policy community today.

Do we accept incremental approaches like using natural gas as a “bridge fuel” to cut coal and oil use, or do we need to have a “wartime level mobilization” to entirely rebuild our energy infrastructure to shift immediately to renewables?

Is that level of change even possible in the timescale that scientist say is necessary to stay under 1.5 or even 2 degrees C of warming?

Secretary Clinton has repeatedly expressed that she would continue the Obama Administration’s positions on climate and energy, and she heralded the Paris negotiations as a success.

In contrast, Bernie Sanders said of the Paris deal that “While this is a step forward it goes nowhere near far enough. The planet is in crisis. We need bold action in the very near future and this does not provide that.”

Reasonable people disagree on the best approach on climate change.

Should we take a pragmatic and ultimately incrementalist approaches that works in the face of a hostile Congress and relies on natural gas as a “bridge fuel” to the next set of solutions?

This has been the approach of the present administration, and is the one that Hillary Clinton has laid out.

But what if the scientists and campaigners are right that this approach will never get us to anything near a safe approach?

A recent study from Oxford researchers showed that to even have a 50/50 chance of staying under 2 degrees that we had to halt building any fossil fuel infrastructure in 2017.

This is because these facilities stay online for decades. To stay under 1.5 degrees would have required we stop fossil build out in 2008.

1.5C: A brief history of the world’s aspirational climate target

This suggests that a revolutionary approach will be needed. And if that is what’s needed, Sanders even admits he will not be not able to create it himself.

“I’m the only candidate who says no president, not Bernie Sanders, can do it all. You know what we need? We need a political revolution in this country,” he said last month.

My 25 years in this field reviewing the science tells me that the incremental “all of the above” approach is no longer viable.

All indications are that we would get to 100% renewables far too late under that approach.

We are heading to disaster, and the recent climatic swings show things are changing already.

An informed observer has to ask: is it unreasonable to prioritize children and grandchildren with precautionary, revolutionary action on climate?

And crucially, they know they cannot wait for us old people to lead. The choice is clear: half measures are no longer enough.

Timmons Roberts is Ittleson Professor of Environmental Studies and Sociology at Brown University, and author and co-author of 70 articles and 12 books, including Power in a Warming World, 2015, from MIT Press.  He is on Twitter @timmonsroberts and his policy research lab is online at www.climatedevlab.brown.edu