Democrat candidates both agree global warming is a pressing issue, but their plans to tackle the issue are significantly different (Part 1 of 2) 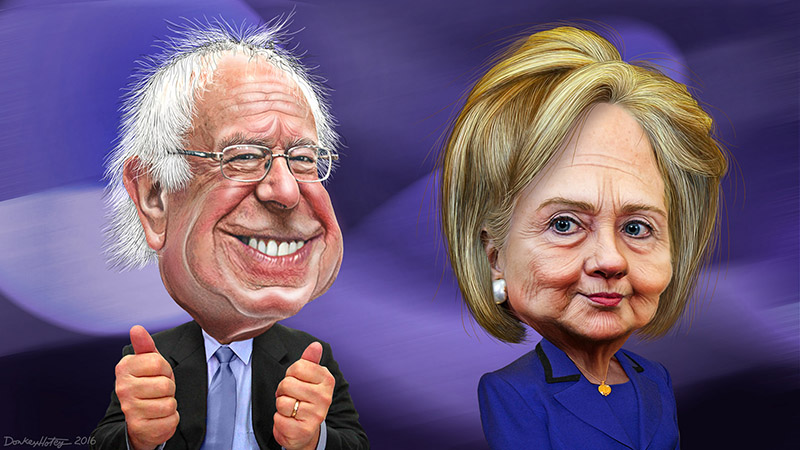 Though less discussed than several other major issues that separate them, climate change is one where Hillary Clinton and Bernie Sanders’ positions and records markedly diverge.

Climate change is a revealing issue to provide a glimpse into what level of change each candidate and their supporters see as necessary.

Most centrally, many of Senator Sanders’ core supporters have strongly held beliefs about the urgency of addressing climate change, and have grave concerns about the approach proposed by Secretary Clinton.

Both candidates strongly agree that climate change is happening and human caused, and that action is needed now.

In continuation of the Obama Administration policy and approach, Hillary Clinton has called for an “all of the above” energy policy, utilizing the US’s large natural gas reserves to reduce its dependence on coal and imported oil.

She has called for the US to become a “clean energy superpower” with the installation of 500 million solar panels by the end of her first term.

She has not rejected the use of hydraulic fracturing (“fracking”) of natural gas from deposits underground using high-pressure injection of chemicals.

To the contrary, she has a long track record while Secretary of State of helping roll back a fracking ban in Bulgaria, and promoting American fracking technology around the world.

Importantly, her focus is on shifting off coal, and her website proposes a $30 billion plan to help coal-dependent workers and communities transition to renewable energy.

In fact, Clinton’s coal plan includes research funding for CCS, widely seen in the coal industry as their last best hope in the face of climate activism.

The campaigning organization 350.org created a scorecard that reviewed how Democratic candidates will “keep it in the ground?” (with the “it” being fossil fuels).

They judged that the two campaigns shared positions on four issues.

These include opposing the Keystone XL pipeline (which Clinton avoided taking a position on for years until a disputed reversal in September), opposing Arctic and offshore Atlantic drilling, and calling for the Department of Justice to investigate Exxon for its suppression of science on climate change.

Clinton got negative marks from 350.org for not opposing fracking, not opposing extraction on public lands, not supporting divestment from fossil fuels, and not refusing campaign money from the fossil fuel industry.

Several environmental leaders criticized her climate plan as being long on renewables but very short on addressing the power of fossil fuel interests in American politics.

In fact, the Huffington Post recently reported that her largest “bundlers” of campaign contributions and speech supporters had direct ties to the fossil fuel industry.

Naomi Klein argued in the Nation that these contributions were problematic because they reflect her approach to corporations more broadly.

After the huge Porter Ranch methane leak Sanders called for a ban on natural gas fracking, and has said the US policy in general on climate change is too weak and slow.

He has specifically targeted fossil fuel industries as the cause of the doubt and delay among Republicans in Congress: “executives and lobbyists for coal, oil, and gas companies have blocked every attempt to make progress on climate change, and thrown unprecedented amounts of money at elected officials to buy their loyalty.”

In fact, much of Sanders’ plan on climate change is about campaign finance and lobbying reform, seeking to exclude these influences from the undue influence he believes they have.

His website reminds us that “in August 2011, Bernie was “the first national politician to publicly oppose [the] Keystone XL” pipeline project.

His site describes his support for geothermal energy, for energy storage, utility scale solar, carbon pricing, a moratorium on fracking and on nuclear plant construction, interstate and intercity high-speed rail systems, and funding for the world’s vulnerable countries for climate action.

Sanders’ pro-environment list is long, but the site is sometimes short on details, including how the programs would be paid for.

According to his site this provides “the most comprehensive package of benefits for workers… transitioning to a career in the clean energy industry…and …billions of dollars of investments in communities most affected by a transition to a clean energy future.”

On voting, the League of Conservation Voters gives Bernie Sanders a 100% rating in 2015 and 95% over his lifetime.

Clinton received an 82% lifetime rating from the LCV, but the group endorsed her in November without laying out why they spurned the politician with a better record in their own tallies.

In all, climate change is a revealing issue because it provides glimpses into what level of change each candidate and their supporters see as necessary.

In my next blog, I show how each candidate approaches the Copenhagen and Paris negotiations by the UN on climate, and their assessments of what comes next in their wake.

Timmons Roberts is Ittleson Professor of Environmental Studies and Sociology at Brown University, and author and co-author of 70 articles and 12 books, including Power in a Warming World, 2015, from MIT Press.  He is on Twitter @timmonsroberts and his policy research lab is online at www.climatedevlab.brown.edu