Why early entry of the Paris climate pact looks likely 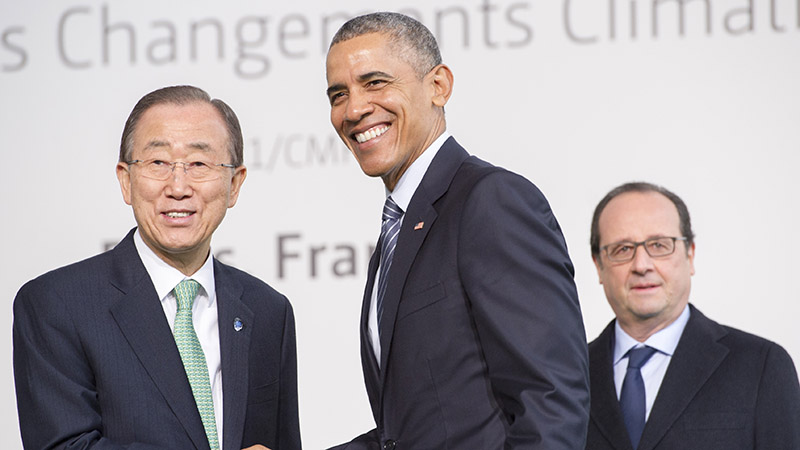 Is the upcoming signing ceremony of the Paris climate deal a bit of a “red herring”, as a recent article on Climate Home suggests?

Nick Chan says what matters is ratification by countries, and suggest we look to the politics of the Kyoto Protocol (KP) and the related Doha Amendment for guidance on the pace of this process.

In considering that history, Chan paints a reasonably discouraging picture.

He notes that Russia was able to leverage its effective veto over the KP’s entry into force into securing entry into the World Trade Organisation (WTO), a major geopolitical victory

He also suggests that such “non-ratification as a tool to secure bargaining leverage” should be “fairly unsurprising” in respect of the Paris Agreement (PA) as well.

And he considers that the international community’s failure to ratify the 2012 Doha Amendment to the KP should be a “cautionary experience” for those of us who have suggested that the PA could enter into force later this year.

Report: Paris climate change pact to come into effect ‘by 2018’

But as intuitive as it seems to look to the ratification history of previous major UN climate agreements, are they really comparable to what we are likely to see with the PA?

Let’s begin with the KP.

In order to enter into force, the Kyoto Protocol required ratification by 55 countries, including countries that accounted for at least 55% of the total 1990 CO2 emissions of the developed country parties.

The United States accounted for 33% of those emissions, and Russia for 16%; together, they contributed 49%.

This meant that once the U.S. announced it would not join Kyoto, the only possible path to 55%, and thus to entry into force, required Russian participation.

Without Russia or the U.S., the ratification of the entirety of rest of the developed world would still only add up to 51%. Is it possible that something similar could happen today?

Granted, the PA does also require a double threshold of 55 countries and 55% of emissions.

In this case however, it is 55% of global emissions, and a quick glance at the table that sets out each country’s percentage indicates what an important difference this makes (see p 30).

The US represents nearly 18% of global emissions, and China a little over 20%. The European Union’s combined total is 12%, Russia’s is around 7.5%, and no other country has more than 5%.

It is thus clear that no country has anything remotely like the type of veto power that Russia was able to exercise over the KP.

In fact, the only two countries who could credibly join forces to create a veto even approaching the strength of the one the Russian’s had are the US and China.

And they have both just very publicly committed – to each other and the world – not to do so, and in fact to ratify the PA as “early as possible this year”.

In doing so they will make it extremely difficult for any other country or bloc to credibly threaten entry into force: doing so would require withholding ratification from countries representing 46% of the remaining 62% of global emissions.

The sheer number of countries this would require makes it all but impossible to contemplate: the entire developing world couldn’t do it without China; nor could the developed world without the US

Very well – even if a credible veto threat does not appear likely, does the experience of the Doha Amendment, still languishing out of force more than three years after its adoption, not demonstrate that ratification is a long, slow, and sometimes unsuccessful road?

Perhaps so, but it is well to recall that the entry into force of the Doha Amendment requires ratifications from a full three quarters of the parties to the UNFCCC, a rather forbidding 144 countries.

As it stands, only 61 countries, including China but not the US, have ratified Doha.

Note however that if all of the countries that have ratified Doha ratified the PA, they would account for 33% of global emissions.

Together with the US, they would be 62 countries accounting for 50.91% of global emissions; very much within striking distance of the 55% required (add ratifications from Japan and Brazil, for example, and you would be comfortably across the line.)

The failure of the Doha Amendment to enter into force, therefore, does not seem to inevitably portend a similar fate for the PA.

The most challenging aspect of the ratification politics of the PA may not be getting it into force, but rather ensuring that there is certainty about when exactly this will occur.

The most troubling outcome is that most countries assume that the Agreement will not enter into force in 2016, and plan accordingly.

As the year progresses and more and more countries ratify, however, it begins to look increasingly likely that it may in fact do so.

Eventually, a tipping point is reached, and non-ratified countries, not wanting to be left out of the important first meeting (CMA) of the PA, hurriedly ratify in September or October, thereby pushing the Agreement into force late in the year.

In those circumstances, the first CMA of the Agreement will still be held in 2016, but the negotiations required to be able to take the decisions required at that meeting will not have occurred, because countries will have assumed they had until 2017, or later, to complete them.

The way to resolve this issue is, of course, through negotiation.

Countries should use the signing ceremony on 22 April as an opportunity to agree on when they intend to bring the Agreement into force.

If it can be done this year, it should be.

Doing so would likely require a return to the level of diplomatic intensity that was in evidence last year in concluding and adopting the Agreement itself.

Having reached that milestone, those who negotiated the Paris Agreement may think they’ve earned the right to a more sedate 2016.

One look at rising levels of CO2 recorded at the Mauna Loaa observatory in Hawaii should be enough to disabuse them of that notion.

Michael Dobson is a PhD student in Global Politics at the New School for Social Research, and a former climate advisor to the Marshall Islands. Follow him on twitter @michaeldobsonNZ