Why are big EU polluters moaning about carbon leakage?

Industries like cement and steel threaten to move jobs overseas if the price of emissions rises, in a challenge to climate goals 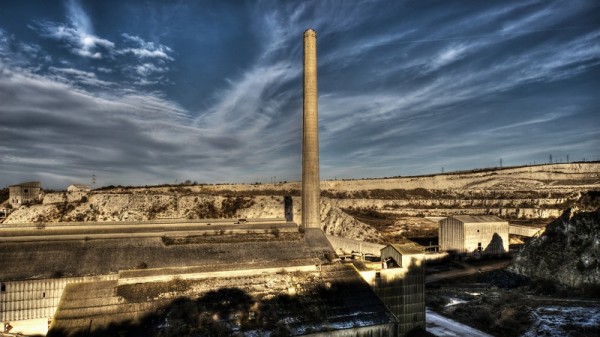 An abandoned cement works in the UK – will carbon costs drive more out of business? (Flickr/Paul)

The idea of putting a price on carbon has influential backers, notably the World Bank.

Here’s the rub: businesses will lobby like mad against anything that puts their costs up.

More to the point, if there is a price on carbon in one jurisdiction but not another, manufacturers threaten to leave, taking jobs with them.

It is fear of such a flight of industry – known as “carbon leakage” – holding back the EU from tighter carbon market rules.

But is that fear justified? If so, what is the best way to deal with it? And how can others learn from the EU experience?

Research carried out for the European Commission in 2013 found no evidence production had shifted overseas as a result of carbon costs.

This is commonly cited by climate campaigners to rebut industry lobbying.

The period studied was marked by a low carbon price, however. Most of the emissions permits industries needed were given for free and the 2008 financial crisis dented demand on the market.

It does not prove leakage will not occur in future, if (as intended) the carbon price increases.

The researchers concluded that along with other factors, “high carbon prices – if only prevalent in Europe – will make global competition (a little bit) harder for European industry”.

So there is some basis for concern, particularly for carbon-intensive sectors like steel, cement and chemicals.

They play this up, lobbying aggressively for special treatment.

In response to the latest round of policy proposals this week, European Aluminium claimed its sector was the “most exposed” and called for compensation.

The Confederation of European Paper Industries made a case for free allocation to combined heat and power plants, widely used in the sector.

A mountain of surplus permits mean industries are unlikely to feel the squeeze this decade, according to think tank Sandbag.

“The general picture is that most manufacturing sectors have more allowances than they need, going out to 2020,” head of policy Damien Morris told RTCC.

That shields them from the global competition temporarily, but gives little incentive to invest in low carbon technology.

The Commission forecasts the market carbon price will rise to average €25 a tonne next decade, from less than €8 today.

The number of free allowances will fall by about a quarter, according to news wire Carbon Pulse, while trebling in cost for governments.

Trade associations tend to focus on demands for freebies, compensation and laxer rules.

The other way to become more competitive is to get more efficient. That is the behaviour the ETS is meant to promote.

With energy making up a big portion of their costs, heavy industries already have an incentive to make savings. But amid fierce global competition, they may avoid measures with a long payback time.

That is where creative projects are needed, like steel giant ArcelorMittal’s €87 million plant to make bioethanol from waste gases that would otherwise be emitted.

For the first time, the EU is extending its innovation fund to industrial carbon-cutting efforts. It set aside €1 billion worth of allowances to support “breakthrough technologies”.

Ultimately, the problem for EU industry is not high carbon costs. It is the gap between its carbon costs and those outside the bloc.

Around 40 countries and 20 regions price carbon pollution, according to the latest World Bank report, with more to follow.

China is planning to introduce a national carbon market from next year, building on seven regional pilots.

“It’s no longer a matter of if or when to price carbon – there is a growing sense of inevitability to put a price on carbon,” Rachel Kyte, the World Bank’s climate envoy, has told RTCC.

The subject doesn’t feature heavily in the draft text for a global climate deal, due to be signed in Paris this December.

But Paris will be an opportunity for the EU and advocates to mobilise more support for pricing carbon.

There are some headwinds. Latin American socialist countries, in particular, are resistant to market solutions.

Another option floated for the EU is to tax imports based on their carbon footprint, to cancel out the difference.

That would put the leakage complaints to bed but likely run into stiff opposition from trading partners.

One way or another, an effective response to global warming demands action from the most polluting sectors.

There is increasing support for the Paris deal to include a goal to slash emissions to net zero by the end of the century.