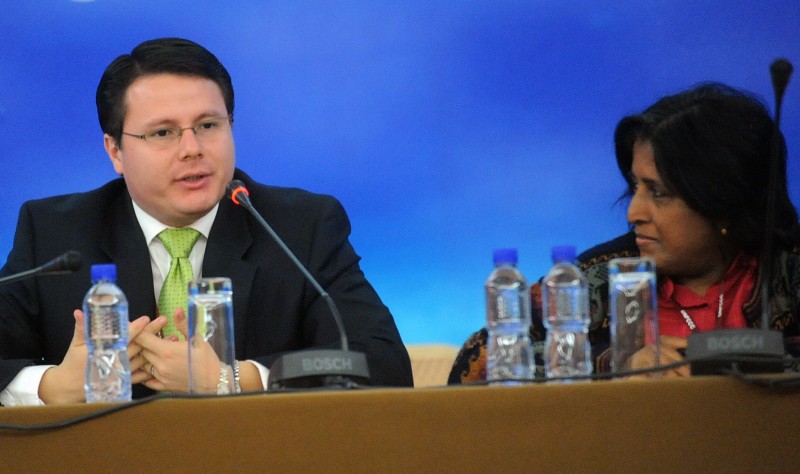 “It has been risk management till today, but now it’s the real loss and damage.”

That’s the view of Ecuador’s environment minister Daniel Ortega Pacheco, one of a handful of officials hand-picked by the French government to help steer a global climate pact safely into port by the end of the week.

Up until 3am on Wednesday morning liaising with colleagues in capital Quito, Ortega was back at the north-east Paris conference centre just after 8am to continue discussions.

He is “quietly optimistic” about plans for an agreement, he says, an opinion based on the closed-door discussions he has participated in with fellow ministers in the past two days.

Politically volatile issues over climate compensation, funding to poor countries and the burden emerging economies will have to take in a new agreement remain unresolved, yet Ortega says spirits in the inner circle of ministers are high.

Much of that confidence is due to the handling of these talks by Laurent Fabius, the immaculately-dressed French foreign minister, a diplomat who appears to charm anyone he meets.

“People love the guy – when he came into a dinner the other night everyone was smiling. He is a lovely guy,” says Ortega. More importantly, “he has delivered on what he has promised.”

Fabius said he would have a final text for a global climate deal ready by late Wednesday, and it looks like he’s on course to do it. And for Ortega to show confidence is telling.

Ecuador is part of a group of Latin American countries known as ALBA, including the likes of Venezuela and Bolivia that has long despaired of these talks, arguing they are being asked to make greenhouse gas cuts but being offered little in return.

Now all three of those countries are represented in Fabius’ inner circle in Paris. Firebrand Claudia Salerno, a one-time favourite of the late Hugo Chavez, is even tasked with producing the ‘preamble’ to a global deal.

“Having three ministers from ALBA is a major compromise and it shows political will,” says Ortega.

Paris climate talks: What do the last 3 days have in store?
Analysis: Meet the suits at Paris climate change talks

Still, he has reservations. There’s a lurking fear that Fabius may try and pass off a draft text as the finished item today. Ortega believes that’s unlikely but says he’ll be watching closely. “Hopefully they don’t think it is the agreement,” he says.

There’s also the wider question of what will be in a pact and how forceful it will be?

Ecuador is a supporter of reducing the warming threshold to what scientists say will be a safer yet much harder to attain 1.5C.

“That is a big breakthrough… if you are aiming for 1.5C policy should change, and if it is the goal some countries may be willing to adapt to the 5-year goal.”

India, Saudi Arabia and China are known opponents, but pressure on them to agree to some reference to this line will inevitably increase as Friday nears.

But it’s resources that worries many developing countries. They want richer nations like the US, Australia, Japan and EU 28 to commit to boosting climate finance up to and beyond 2020.

“We will not be able to achieve 1.5C if we do not receive significant climate financing,” he says. So far there’s little sign of that crystalising in a deal, although there is still time.

And it’s the lack of clarity on this issue which makes a new so-called ‘Coalition Of Ambition’ launched by the EU, US and 79 African, Caribbean and small island states on Tuesday curious.

While the 100+ group of nations is calling for a tough new deal, it offers little detail on resources and it’s hard to work out what is ambitious about its position.

National climate plans from some of its developed country members are rated at the low end of adequate to inadequate by analysts at Climate Action Tracker.

Many in the negotiating halls assume it’s less a real coalition and more a tactical ploy to encourage bigger emitters to submit to regular reviews of their climate plans.

“It is a coalition for what?,” says Ortega with a knowing smile. “A binding deal, resources or simply an agreement in Paris?

“What is the real will of this coalition? Everyone likes the idea of this agreement but there is still need for clarity on where resources are coming from.

“Any attempt to speed up the negotiations is welcome from me but we need to understand what the members of the group are doing.”