Paris climate talks: What do the last 3 days have in store?

Oil producers, forest nations, high-tech trading centres, low lying and desert countries all have distinct interests to protect. This is where it gets serious. 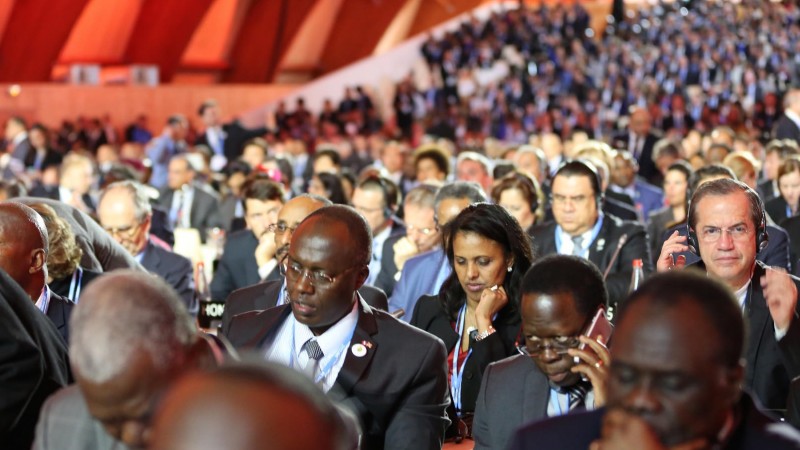 By Nick Mabey in Paris

As the Paris climate negotiations move into their climactic second week the focus is shifting from technical to political.

The negotiating text has been stripped of (much of) its most baroque complications and duplications. What is left reflects core differences between countries.

The second week will demand less a mastery of complex text, and more an ability to navigate the shifting webs of alliances between nearly 200 countries. This will be reflected in a fierce public battle over how to characterise the main political dynamics in Paris.

India and South Africa have already attempted to solidify developing country alliances by accusing the US of undermining the fundamental principle of equity in the climate convention. The US has talked of an emerging “high ambition coalition” between countries spanning the traditional rich-poor divide.

By defining the narrative of the negotiations as either a fight for “climate justice” or “climate ambition”, countries hope to focus political and media pressure on those they claim are blocking progress. This is tactically understandable but obscures the real politics of the negotiations.

Climate change negotiations are too often described as a kind of environmental cold war between developed and developing countries over a zero-sum “carbon space”. But this dynamic has not held for over a decade.

The implications of climate change, and its solutions, are too central to countries’ core national interests for them to base negotiating positions just on an abstract sense of “historic responsibility”.

Countries’ interests are also too diverse for permanent alliances to be made simply on the basis of similar levels of per capita income. Oil producers, forest nations, high-tech trading centres, low lying or desert countries all have distinct interests to protect.

A better analogy for Paris is the shifting skein of alliances, and periodic conflicts, between late 19th century powers in Europe and West Asia.

At this time the major powers had a shared interest in maintaining general stability, but struggled to reconcile this long term goal with the temptations of securing tactical advantages of power or territory.

The mismanagement of these divergent short term interests led – inadvertently – to the European disasters of the early 20th century. Shared strategic intentions do not automatically lead to successful tactical diplomacy.

The “major powers” in Paris are the US, EU, China and India. On the opening day of Paris leaders from all of these countries publically committed to deliver a binding deal in Paris capable of keeping warming well below 2C.

There is no reason to doubt the sincerity of these statements. Given the web of bilateral talks leading up to Paris being seen to publically block agreement would incur significant geopolitical costs.

But below these statements of broad strategic intent, understanding the tactical dynamics of Paris requires a clearer view of national interests and how they interact.

Podcast: How climate vulnerable countries are setting the agenda in Paris

During the Bush years the EU was at odds with the US; while China and India worked closely together. In the run-up to Paris the US and EU positions have moved closer together.

Both have high ambitions for a strong, enduring climate agreement which brings in the major developing countries on a (relatively) equal footing.

Obama needs this to secure his legacy and protect Democratic domestic energy policy.  The EU needs to show its public a return for years of climate leadership. Europe’s commitment to the Kyoto Protocol and expensive investment in lowering the global price of renewable energy are best justified as laying the foundations for the Paris Agreement.

China is steering a careful course between shouldering the responsibilities of an emerging superpower and its traditional role as defender of the developing countries. China fears an over constrictive agreement and intrusive monitoring of its domestic actions. Even more it wants to avoid blame for any failure in Paris.

Shorn of its “big brother”, India feels more vulnerable to having a deal imposed which it fears would constrain future growth. If Paris commits countries to “ratchet” up climate action every 5 years then India knows that at the next review it will be under intense pressure to follow China’s commitment to peak emissions.

None of the major powers can decisively shape the Paris deal just by working with their closest allies. They all need to align with other groups. The largest of these are the Least Developed Country (LDC) group and (overlapping) Africa Group.

These groups have historically focused their efforts on trying to increase funding for adaption to climate impacts. Increasingly they are also prioritising avoiding high levels of climate change.

A powerful new player is the Climate Vulnerable Forum (CVF) which ranges from middle income Barbados to large low income countries like Bangladesh, Ethiopia and the Philippines. The CVF also wants funding to manage climate impacts, but its main priority in Paris is to secure binding action from all major emitters to limit climate change to below 1.5C.

The CVF complements the role of the Small Island States in trying to shift agreement away from a lowest common denominator outcome dominated by the large powers.

This crowded field resolves into a core triangle of relationships. Along one side, China and India aim to persuade the LDCs and Africa that they will be better able to pressure richer countries for more assistance if they work together.

Hence a narrative focused on the importance of “equity” and “differentiation” in the agreement in order to align developing country groups. This alliance then helps India and China resist pressure for stronger rules on limiting developing country emissions.

This dynamic was exemplified by the outrage in week one from South Africa, India and China at the US suggestion that some emerging economies members could – voluntarily – help poorer countries financially.

The moral impact of this response was rather undermined by the fact that Modi and Xi, along with other emerging economy leaders, had announced support packages for poorer countries a few days before.

Along another side of the triangle, the US and EU are aiming to attract the CVF, Africa Group and the Small Islands with the prospect of a strong treaty with mechanisms to help increase emissions cuts nearer to 1.5C. While also promising a larger proportion of available funding to help these countries deal with climate change.

The US and EU hope that this will lower demands for sharply increased  funding to help countries reduce emissions after 2020, and to weaken attempts to include compensation for climate damage in the agreement.

This competition for their affection puts the cluster of developing country groups in a strong position. There will be a temptation to play both sides in order to maximise support for more funding and get a strong emission reduction treaty.

But this is a dangerous and difficult game. These groups are loosely knit coalitions where countries have very different balances of interests. Many Africa Group countries are also OPEC members.

They are more analogous to the fragmented Holy Roman Empire than Bismarck’s Germany. Individual countries will come under intense diplomatic pressure to shift position from major countries with which they have significant trade, investment and financial ties.

China and the EU both have strong trade and investment relationships in Africa and Latin America.

If developing country groups overplay their hand they could force an alliance to form along the final side of the triangle; where US and China come together to dictate the final deal. This would most likely result in their worst case scenario of weak mitigation rules and low financial commitments.

This triangle maps the major currents which will dominate the political battlefield in Paris, but other countries will play key roles. Mexico, Colombia and Costa Rica will argue for higher ambition from emerging economies; Turkey, Russia and Ukraine for less.

Saudi Arabia will try to block anything that prevents maximisation of its fossil fuel revenues. Norway and Switzerland will defend environmental integrity. Brazil as always will shape negotiations on forests, and may be a key broker of the broader deal even as its government unravels at home.

There will be an intense “air war” across the week as the major countries attempt to claim the moral high ground over whether “climate ambition” or “climate equity” defines the negotiations.

However, underneath the smoke of battle the final geometry of alliances will emerge through hard bargaining and pragmatic compromise.

This, not abstract principles, will determine the political foundation on which the strength – or weakness – of the Paris Agreement will be built.