Why are business leaders showing up at COP21? Climate Home asked chief executives what they are doing about global warming 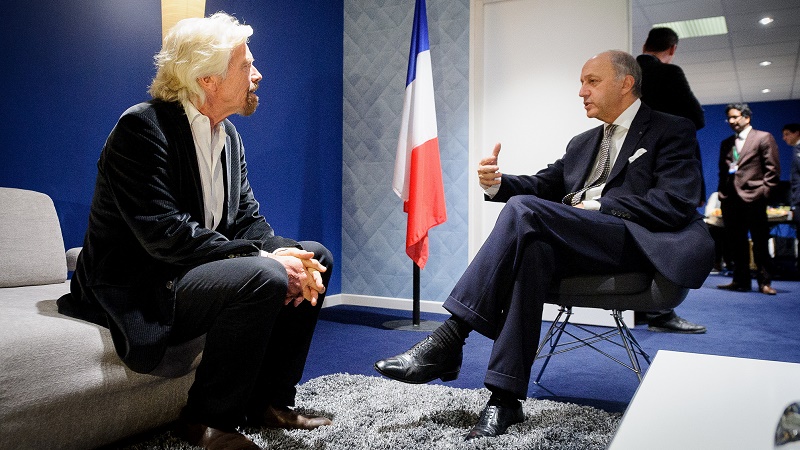 Campaign groups have been producing a daily newsletter, Eco, at every major international environment conference since 1972.

This year at COP21 in Paris, they have a rival: The Bottom Line, which claims to be “the voice of leading businesses and investors”.

There are more suits at this year’s UN climate summit than ever before, on the sidelines of efforts to get an international climate pact.

So who are they and why are they getting involved?

“Your business can’t succeed in a world that fails”

His outfit spends 14% of its DKK 12.5 billion (US$ 1.8bn) revenue on research and development. Much of that is focused on sustainable development goals, for example using microbes to improve food crop yields.

He sees the climate becoming more of a mainstream business issue: “If you go back just a few years, you still saw companies who were in denial, who were closing their eyes and at best doing a bit of greenwashing. I don’t see that today. Pretty much everyone realises that your business can’t succeed in a world that fails.”

Innovation can go along way but needs to be backed by a price on emissions, whether through a market or a tax, he adds.

For Mahendra Singhi, CEO of India’s third largest cement producer Dalmia, the COP is an opportunity to find new sources of investment.

In a carbon-intensive sector, he takes pride in using waste materials like power station fly ash to reduce the company’s environmental impact. “Our philosophy is to consume less, produce more.”

Already generating 200MW of power from waste heat, the firm could add 600MW with finance, he says. The problem is long payback periods for low carbon investment.

“For business and particularly for business of developing countries, important is first how we get consistent funds or grants between 2016 and 2030, and then to deliver.”

The We Mean Business coalition, which produces the new pamphlet, represents 341 companies with a total revenue of US$7.1 trillion and 160 investors holding $19.5trn worth of assets.

Where many lobby groups defend the status quo, this one supports clear policies for decarbonising the global economy.

Its asks are based on the agreed 2C limit on global warming, not the tighter 1.5C target gaining momentum in Paris. That might not seem strong enough for people vulnerable to sea level rise or drought.

But it sets out clearly what is needed to turn 2C into a meaningful framework to get money flowing from brown to green business.

It does this in the language of negotiators, proposing specific recommendations for a Paris agreement. This includes greenhouse gas emissions reaching net zero “well before the end of the century”, transparency and carbon pricing.

And it’s not afraid to go after forces it thinks are slowing the Paris talks.

On Monday Richard Branson and Greenpeace chief Kumi Naidoo took part in an impromptu press conference staged by We Mean Business to attack laggards at the negotiations.

“Now is the time to be courageous… post Paris we need to put a meaningful price on carbon and and fossil fuel subsidies,” Branson said.

Report: Coke, Sony among 114 firms to cut carbon in line with 2C

In a separate initiative, more than a hundred multinationals have agreed to set science-based targets to slim their carbon footprints in line with 2C. Ten including Coca-Cola, Kellogg and Enel have already had their targets independently approved.

At a two-day Caring for the Climate forum on the sidelines of COP21, CEOs of Schneider Electric and Sindicatum were introduced by UN secretary general Ban Ki-moon and US secretary of state John Kerry.

It is not a diverse club: only one of the six business leaders speaking on Tuesday was female. And many firms sent their chief sustainability officers rather than the top dog.

But it is a more serious show of practical backing for the climate agenda from the private sector than ever before.