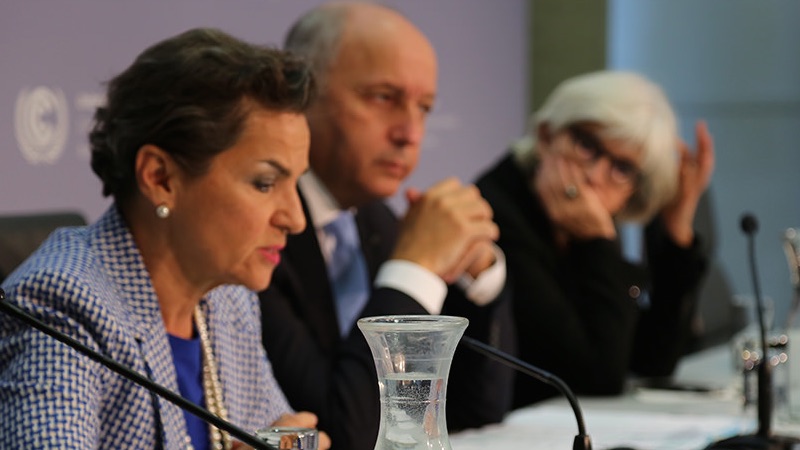 “Just weeks after the terror attacks, Paris will soon be known as the place where world leaders stood on the right side of history.”

So said World Bank chief Jim Kim this week, one of an estimated 40,000 delegates who will cram into the French capital’s bleak Le Bourget airfield next week for the UN’s 2015 climate change summit.

At stake is the transformation of the world economy away from fossil fuels to wind, solar, marine and as yet undiscovered forms of energy by 2100.

The last time nearly 200 countries tried to seal a global deal was 2009, but political will froze in the snows of Copenhagen and greenhouse gas emissions kept rising.

This time is different, according to leading envoys.

“The stars are more aligned right now to reach agreement than I have ever seen them; we have a real opportunity,” top US negotiator Todd Stern said in a Tuesday media call.

“No country wants the situation in Copenhagen to be repeated,” China’s top climate official Xie Zhenhua told Reuters. “The world still has time to meet the 2C target… the key issue will be in funding and technology.”

The EU’s climate chief Miguel Arias Canete insisted “we will have a deal… of that we have no doubt.”

Indian environment minister Prakash Javadekar stressed his government would arrive in Paris with “hope and a positive, open mind set,” he said. “We will not be blocking the deal, we will be facilitating… we care about 7 billion people.”

The meeting will start with an unprecedented show of support for a UN pact. Heads of state from 147 out of the 195 parties to the UN are set to attend the opening day.

From 10am leaders will take the podium at 3-minute intervals to outline their vision for a low carbon world and hopes for the agreement.

“What a powerful rebuke to the terrorists it will be when the world stands as one and shows that we will not be deterred from building a better future for our children,” said US president Barack Obama earlier this week, after a White House meeting with France president Francois Hollande.

We know already that France and India will announce a new global solar alliance to ramp up power from the sun in developing countries.

The UK, Norway and Germany will signal their support for forest protection initiatives and underline their financial commitments to those countries with large forest stocks.

And the prime ministers of Australia and Canada – countries previously accused of blocking these negotiations – are expected to signal an intention to change tack and embrace a green future.

The tone leaders strike and the outcome of bilateral meetings – especially those between the US, India and China – will be important, said veteran UN observer Alden Meyer, from the US Union of Concerned Scientists.

“If anything we’re struck by more of a resolve and one can see why… there’s a degree of solidarity on this issue. Since 9/11 we haven’t seen anything quite like that. There’s an absolutely amazing outpouring of desire to do something in common,” said Andrew Steer, executive director of the World Resources Institute.

COP21 briefing: Sign up here for our morning news summary

If the mood music is positive, the underlying data and science behind climate change is distinctly negative.

This week the World Meteorological Organization declared 2015 would be the hottest year on record, partly down to a rampant El Nino in the southern oceans, partly down to greenhouse gas emissions.

The UN’s much-cited “Emissions Gap” study says more than 170 climate plans submitted by countries ahead of Paris will help slow warming, but are well off meeting the needed level of carbon cuts to avoid warming above 2C.

Some say the changing climate is already biting. Another UN report this week – this time from its disaster risk body – revealed 90% of major disasters since 1995 were weather-related.

School children in the Philippines contemplate the aftermath of Typhoon Haiyan in 2013 (Pic: Pio Arce/Genesis Photos)

Those figures explain why the mood of negotiators representing climate vulnerable nations is less sunny as the Paris talks draw near.

“For the LDCs, economic development, regional food security, ecosystems, and the very survival of their populations and livelihoods are at risk if talks aim only for a 2C world,” he said in a statement.

“Countries must commit to a more ambitious long-term pathway to limit global average temperature increase to below 1.5C by the end of the century.”

Both the LDCs and the 44-strong Alliance of Small Island States want more guarantees of no-strings-attached climate finance than is currently on offer, particularly so they can adapt to future changes.

The potent small island bloc is also pushing for a UN-led body to help countries cope with irreversible impacts of climate change, a move the US and EU fear could make them liable for all climate impacts.

“Some impacts cannot be addressed through adaptation at all,” said an AOSIS spokesperson.

“To address sea level rise, ocean acidification, and other severe impacts, an international mechanism on Loss and Damage must be a central and distinct element of the Paris package and lead to action.”

Hope springs eternal in the city of light. For one, global emissions came close to stalling in 2014, according to the Dutch environment agency in a report published this week.

“Emissions from fossil fuel use and cement production slowed down to only 0.5% compared to 2013, while the world’s economy grew by 3%, showing a partial decoupling of CO2 emissions and economic growth,” it said.

It’s positive news, albeit across the world there are different signals emerging. EU emissions fell 5.4%, India’s rose 7.8%. The US and China inched up 0.9%.

To turn the rise into a sharp fall needed to avoid 2C of warming, governments must ban dirty coal plants, invest in renewables, efficient appliances and slow methane links from the oil and gas sector.

“I don’t understand some countries – they have renewable energy programmes and at the same time they have subsidies for fossil fuels. This is, in my view, myopic,” he told the Guardian.

According to the International Renewable Energy Agency (IRENA) Paris need to send a tough signal to governments and markets that renewables are here to stay, and drive investment past the $270 billion mark it hit in 2014.

“Transitioning rapidly to a future fuelled by renewable energy, accompanied by increasing energy efficiency, is the most effective way to limit global temperature rise. This transition is underway but it must be accelerated.”

With transition comes pain, and potential job losses. The decline of coal will need to be managed, said the World Bank’s top climate official Rachel Kyte, if all countries are going to buy into a greener vision.

“There’s a legitimate concern among countries that have brown economy that the international community will be with them every step as they transition to a greener energy mix and future,” she said.

“Once we leave all the hot air and rhetoric we have to work to make the energy mix cleaner and that is going to require hard work and different policy choices from West Virginia and Kentucky through to India and Australia.

“I think to real seriousness to how we help those countries dependent on coal.”

Amid the obvious challenges, many business leaders appear enthused by the prospect of new low carbon energy markets opening up around the world.

Abyd Karmali, head of climate finance at Bank of America Merrill Lynch concurs. He compares the Paris talks to the Arc de Triomphe, which feeds off ten incoming roads.

“Actions from government, investors, banks and building societies are all moving in the same direction,” he said in London this week.

Paris will be the moment the world wakes up to a billion-dollar clean energy revolution that has been taking place beneath our noses, said Michael Liebreich, founder of Bloomberg New Energy Finance.

“There’s no real acknowledgement that the energy sector is being transformed… there are anecdotal stories but no overall sense of the inevitable. It will all come together in Paris,” he said.

Even oil giant Shell is in on the act. A Paris deal that offers more scope for carbon pricing and markets is to be welcomed, said its climate advisor David Hone.

“The larger the markets, the more opportunities it opens and the lower the cost,” he said.

And lest anyone mention the ‘c’ word again, for leading climate economist Lord Stern comparisons to 2009 are wide of the mark. The world has radically changed in six years.

“Paris is not Copenhagen, the sense of urgency has risen, preparation is better and more cohesive, the politics has changed,” he said.

Still, inside the talks the main focus will be on marginal gains and maintaining negotiating positions until the very last moment. “It’s like a rubik’s cube with 195 sides,” said former UK climate secretary of state Ed Miliband this week, looking back at his traumatic experience in 2009.

Developing a way of guaranteeing financial flows to developing countries that do not have richer nations running for the exit is a “fragile” point of contention, said Jennifer Morgan from the WRI.

“Finding a way Paris can provide clarity and contribute to poorest but catalyse a shift in investments is a tight balance.”

Climate cash and the promise cleaner technologies will be shared are “critical” said WWF’s head of climate Samantha Smith.

“There are some developing countries that are worried because they are trying to industrialise with fewer and fewer fossil fuels and that is something that hasn’t been done before. If they don’t have confidence that further efforts will be fair it’s hard for them,” she said.

The list of other Paris outcomes deemed essential barely seems to end. A long term goal, commitments to boost emission cuts every five years and new guidelines for reporting and measuring progress are on the table.

But at the heart of a deal lies fairness, and the need to ensure the roles the 195 countries play towards a common goal are weighted depending on their level of development.

“If there is progress on differentiation suddenly whole swathes of the text could be streamlined,” a senior EU negotiator said earlier this month.

Benito Muller, head of Oxford Climate Policy, said the Paris deal should acknowledge differences but not try and define them in terms of an “explicit list” or other criteria.

“We can say richer will have to help poorer…. But we don’t need a list of who is richer and who is poorer,” he said.

It’s on such fine margins that hinge a UN pact to limit global warming. Envoys will battle night after night to keep a full stop, comma or insert the word ‘shall’ over ‘should’.

But despite the challenge most still appear optimistic, hoping a common urge to protect the planet and its billions of inhabitants will override other concerns.

The two roads on offer, said Pope Francis in Nairobi on Thursday, are fairly clear.

“It would be sad, and I dare say even catastrophic, were particular interests to prevail over the common good,” he said.

“In this international context, we are confronted with a choice which cannot be ignored: either to improve or to destroy the environment.”