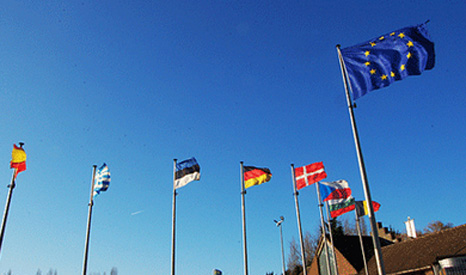 As Brussels creaks under the strain of one of the largest refugee crises since WW2, member states will have another set of key policy decisions to agree on this week: COP21. Countries are primed to thrash out their strategy for the Paris climate summit this week.

That means coming to a common position on loss and damage (climate compensation), what the bloc can do to help global adaptation efforts, a possible target for a long term climate goal and – the elephant in the Council chamber – money!

The bloc is already the developed world’s top provider of climate funds, led by the Nordic countries, Germany, France and the UK. Member states provided €9.6 billion in 2013, and have also committed 47% of the circa $10 billion earmarked for the Green Climate Fund. Still, it’s not nearly enough given that by 2020 developed countries need to meet a 2009 promise to deliver $100 billion a year.

“Assuming a linear track towards €31 billion in 2020, this would require a continual scaling up of climate finance by €3 billion per year,” write Guntram Wolff and Georg Zachmann, researchers at the Brussels-based Bruegel Institute in a report published last Friday. And Germany has already doubled its contribution to €8.3 billion from 2016-2019 it’s unclear if others will follow.

Wolff and Zachmann argue that part of the €8 billion in annual fiscal revenues for member states could be set aside for climate funding, and suggest a carbon tax “on the carbon content of transport and heating fuels” could also raise funds. As RTCC reported earlier in September, a new developed country cash package is due on October 9 at the World Bank annual meeting in Lima.

Officials at the bank seem confident: “I think there will be a finance package and one hopes it would be a generous one,” Rachel Kyte, World Bank special envoy on climate change told the Wall Street Journal at the weekend. “Ms. Kyte said talks on the financing package are continuing but she declined to quote the potential size of the financing package,” the paper reported.

…are coming, according to the UK Met Office. “Global observations suggest that shifts in key global climate patterns, the Pacific Decadal Oscillation (PDO), an El Niño in the tropical Pacific and the Atlantic Multi-decadal Oscillation (AMO) are underway,” says the Exeter-based government-funded agency.

What does this mean? Well, for one, 2015 and 2016 are likely to be warmer than average. “We know natural patterns contribute to global temperature in any given year, but the very warm temperatures so far this year indicate the continued impact of increasing greenhouse gases,” said Professor Stephen Belcher, head of the Met Office Hadley Centre.

…meets in New York this week for its 70th session, opening on Tuesday. Climate change is set to take centre stage with Ban Ki-moon hosting a select group of world leaders on September 27 to work through plans for Paris. A new set of 17 Sustainable Development Goals (SDGs) will also be rubber-stamped by countries during the GA. Goal number 13 is to “take urgent action to combat climate change and its impacts”.

Oil could fall to $20 a barrel, the Guardian reports. Experts at Goldman Sachs say the “potential” is there for prices to continue their decline from $107 last June to $44 today. This would place huge pressure on oil fields that require high prices to thrive, such as the UK’s North Sea, Canada’s Tar Sands and Shell’s venture in the Arctic.

The oil-major’s sponsorship of the British Museum was highlighted by youth groups at the weekend, who invaded the prestigious gallery and launched a series of demonstrations at its front entrance in the central atrium. The company has supported the museum since 1996, most recently backing an exhibit highlighting the culture of indigenous Australians and Pacific islanders.

The @britishmuseum faces an important choice. 100s of people telling it to say NO to BP – will it listen? #dropBP pic.twitter.com/Ym9nxWDjcK

Does this change everything?

The film of Naomi Klein’s bestselling book on why climate change is a huge threat and how the world can cope is coming to cinemas soon. The book – well researched and expertly compiled – was a little hard work, so perhaps the film will make the case in a more accessible fashion?

Meanwhile in the US, Californian Governor Jerry Brown is out to school Republican presidential runner Ben Carson, who says he’s not sure about climate science – by sending him a USB stick with the UN’s IPCC climate science panel report on it…

WWF’s Living Blue Planet report – due out this week – will warn that the combination of over-fishing, pollution and damage to ecosystems caused by ocean acidification are placing intense pressure on the world’s oceans.

Some fisheries face “collapse” with 30 years says the study, based on analysis of 3,132 groupings of 910 bird, reptile, mammal and fish species. Last year’s report revealed that  1.5 Earths would be required to meet the demands humanity makes on nature each year.

Coming up this week…

Ed King is in Paris covering the launch of the 2015 Deep Decarbonization Pathways Project. We’ll hear from one of the Syrian scientists who pulled together the country’s last UN climate report, and Megan Darby will present our latest Emissions Factor podcast looking at the refugee crisis and its links to climate change.

Plus we’ll have another missive from Olga Dobrovidova, who’s deep in Siberia examining the impact of global warming on the Arctic permafrost. If you missed the first of her reports make sure you read it here.