As IPCC gathers for a week of soul-searching, scientists suggest something must be done about mammoth reports 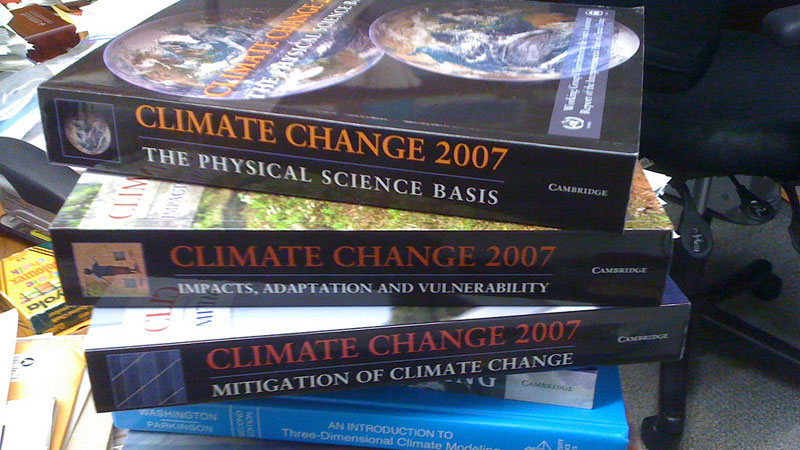 The panel, set up in 1988, will be tackling the questions of a typical midlife crisis: what’s my purpose? Am I going about it in the right way? Does anyone really care about me?

As government panels go, the IPCC is particularly introspective. Scientists release a new assessment report every six years or so, after which they consider in depth the successes and failures of the process and make suggestions for improvements.

It’s hardly surprising that the IPCC engages in this ritual angst. Its purpose is poorly understood and its work frequently maligned by climate change sceptics and vested interests who either don’t believe what it’s saying, or would simply rather it said something else.

“I think the IPCC is by and large a fairly well functioning organisation, but it has a hard time explaining to the rest of the world why it’s there and what it should be doing,” said Richard Klein, a scientist at the Stockholm Environment Institute who worked on the most recent report, released in four instalments in 2013-14.

At the meeting in Nairobi this week, delegates will consider a menu of potential improvements drawn up by the Task Group on the Future Work of the IPCC – a team established in 2013.

The resignation of IPCC chairman Rajendra Pachauri – who is in India fighting sexual harassment allegations – casts a particularly dark cloud over the gathering.

Nonetheless, an IPCC spokesperson told RTCC that it will not affect the week’s agenda, with the structure, scope and composition of the IPCC all set to come under the microscope.

One of the big questions is whether the IPCC is trying to do too much.

Over 830 scientists took part in piecing together the latest mammoth report. They do not get paid for their contributions, and have to balance it with full time jobs at other institutions and universities.

“These assessments are enormous amounts of work – some of that time spent doing more research might be more valuable,” said Ed Hawkins, a climate scientist at the University of Reading.

Combine that with the fact that much of the science is not changing a great deal between reports, and a strong case emerges for stripping down the work to something more manageable.

“The degree to which each new assessment has provided a different view of the science of climate change is diminishing,” said David Vaughan from the British Antarctic Survey and a coordinating lead author on the most recent IPCC report.

“As we would expect, we are providing a consistent picture of the science of climate change from assessment to assessment and that’s unlikely to change substantially in the future. For that reason I think there is scope for really thinking about how the IPCC is serving the policymaking community.”

A message to governments

Boiled down, serving the policymaking community is what the IPCC is all about.

While it is written by scientists, it is commissioned and owned by governments. After a lengthy review process, delegates from 195 countries agree to sign off the report – which basically means that they subscribe to the basic science of climate change.

Each report comes with a “summary for policymakers”, which condenses the key messages into a shorter document that heads of state should – in theory – be able to understand.

This is a rare moment where scientists have the ear of those in power, but at the moment it is something of a wasted opportunity, says Richard Black, director of the Energy and Climate Intelligence Unit.

With each summary standing at a little over 30 pages, he doubts that any time-pressed prime minister or president would take the time to wade through it.

“If you have something like radiative forcing and RCP 2.6 in there, you’re immediately so far down the jargon route that no one who’s not a bit of a specialist will be able to understand it,” he said.

“Of course the argument is often made that that doesn’t matter, because it will be interpreted, distilled by bureaucrats and people in the communication business. But the problem is that, as soon as that happens, the IPCC has lost control of the process.”

If governments want to continue receiving these reports – and it seems like they do – then one possibility is restructuring the assessment cycle so they focus more on new science, and less on repeating the old mantras.

Hans-Otto Pörtner, a scientist at the Alfred-Wegener-Institute for Polar and Marine Research in Germany and a coordinating lead author on the IPCC, suggested more interim reports looking at specific issues could be one way to approach the issue.

“For example there could be a special report on the oceans with all the detailed information and so forth, and then for the main report it could be a summary of that special report, and that could be done for other fields as well,” he said.

The IPCC is barred from becoming too radical by the fact that its reports must gain the consensus of governments, and that it has a particular mandate to fulfil.

This states that: “IPCC reports should be neutral with respect to policy, although they may deal objectively with scientific, technical and socio-economic factors relevant to the application of particular policies.”

And there is a danger that the body could end up attempting to be all things to all people, adds Klein.

“What makes an IPCC report an IPCC report is that it has gone through three rounds of very rigorous review, and even if you’re going to have an interim product and you still want them to have the IPCC stamp of approval you can’t do that without those review processes.

“So the only way in which you could reduce the amount of time to prepare those products would be to give even less time to the authors. I think that would be challenging.”

2015 will be a crucial year for the IPCC. It will elect a new chair and learn important lessons – not least how to deal with an unforeseen sexual harassment scandal.

But it will be whether governments take such suggestions of structural change from tired scientists that will, in the end, be what effects the scientific contribution of the IPCC reports.