Summit of the Americas offers chance for US-Latin climate diplomacy 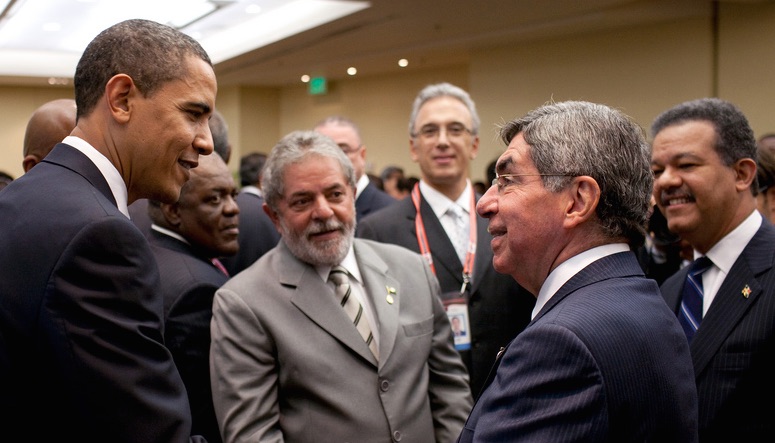 The Summit of the Americas in Panama this week could produce public performances worthy of an Academy award nomination.

Following recent efforts to re-establish diplomatic ties between the US and Cuba, presidents Obama and Castro may stage a carefully choreographed handshake.

This eagerly anticipated moment could usher in a new chapter of US – Latin American relations as leaders south of the Rio Grande have repeatedly called for an end to US aggression against Cuba.

However, Venezuelan President Maduro could upset the party by criticising recent US sanctions against Venezuela, which have been unanimously rejected by the Community of Latin American and Caribbean States (CELAC).

Yet beyond the theatrics, there could be very important diplomatic exchanges behind the scenes, which could prove pivotal for the world’s response to global climate change.

The United Nations climate change negotiations are headed towards a major deadline this December in Paris to create a new global agreement.

The summit presents an ideal place for the US and Latin American and Caribbean leaders to candidly and privately discuss the issue.

Many governments in the Western Hemisphere are taking proactive steps on climate change.

The US has followed suit with President Obama steering his agencies to reduce emissions from power generation and improve vehicle fuel efficiency.

But what can the US and Latin America and the Caribbean do together? In 2009 the U.S. launched its Energy and Climate Partnership of the Americas (ECPA) with the vision to make progress on the deployment of clean energy and reduce energy poverty across the hemisphere.

The ECPA has conducted scores of workshops and technical exchanges involving most countries in the hemisphere.

But until late last month, there was little to come from the ECPA’s important yet modest results. President Obama and Mexican President Enrique Peña Nieto changed that when they announced plans to launch a clean energy and climate policy task force.

These significant efforts at the national and regional level present useful conditions from which to have constructive conversations on climate change at the Summit of the Americas.

Climate change has become a high-level issue for President Obama who has been working quietly for months in the attempt to build progress toward a new climate agreement in Paris. Similarly, Latin American countries are committed to the UN climate talks.

Yet despite consensus between the U.S. and Latin America and Caribbean that climate change is a grave threat, there are important differences about how the problem should be tackled.

At the UN climate talks the US and Latin American and Caribbean countries tend to adopt distinct positions given the negotiations have traditionally been split between the global North and South.

Latin America and the Caribbean favour a “legally binding agreement” on climate, whereas the US is only willing to back an “agreement,” given the hostility of a Republican-led Congress to a new global treaty.

They are also are demanding that rich countries including the US support them with climate finance and technology transfer in order to make the transition to low-carbon economies and adapt to climate impacts.

Since developing countries will have to act on climate change without the benefit of cheap fossil fuels and achieve prosperity even as the climate becomes less predictable, such funding is well-justified.

However, despite these difficulties at the UN climate negotiations, the US – China Joint Announcement on Climate Change last November and the recent formation of the US – Mexico task force demonstrates that climate diplomacy between the North and South can achieve results.

It could also yield a new affinity grouping for the US in the negotiations—other nations seeking to focus on “benefit sharing, not just burden-sharing.”

Latin American leaders such as Chile’s Michelle Bachelet and Mexico’s Enrique Peña Nieto could bring together leaders from the US, Brazil, Peru and others to discuss these issues.

A private gathering could prove constructive for building trust and discussing areas of consensus and cooperation, given most of the world’s leaders will likely attend the Paris conference.

The US and Latin American and Caribbean countries can discuss progress on their nation’s national contributions on climate change which are being submitted to the UN this year and whether they are sufficiently ambitious and based on a transparent and participatory process.

Talks can also address how these contributions can become more ambitious in the coming decades to keep the world on a trajectory to stay below 2 degrees of warming.

The US can build on the advances of the Energy and Climate Partnership of the Americas during President Obama’s remaining time in office. Hemispheric action could focus on capitalizing on the enormous potential of renewable energy in the Americas and building cleaner and more sustainable cities.

Both can contribute to building prosperity while delivering important benefits for development, health and security.

The Summit of the Americas is an excellent setting to bring these voices together to build further progress. A successful outcome in Paris this December could depend on it.

All opinions expressed in this article are the sole responsibility of the authors.  This article was originally published on AQ Online.