Is the UN’s climate change body still fit for purpose? 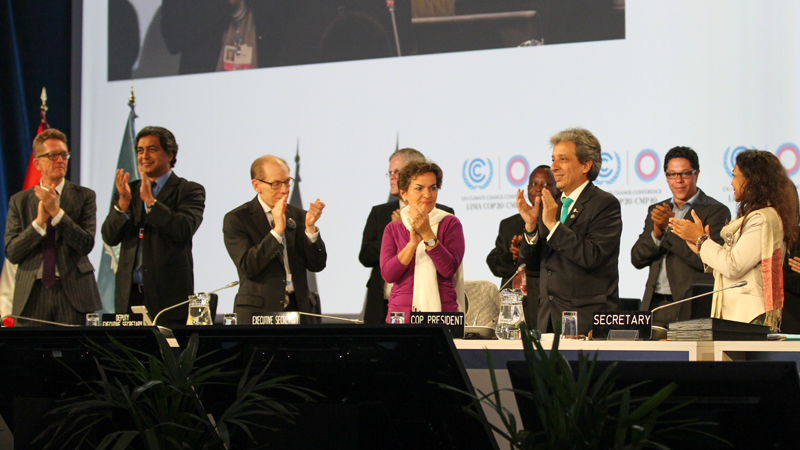 Going into the Lima talks there was a great sense of optimism buoyed by the successful climate change summit held by the UN secretary general in September and with the many hundreds of thousands of marchers in New York and many other cities around the world.

This was followed closely with the historic agreement by President Obama and President Xi that the United States of America and China, the two biggest polluting countries, will act together to tackle their respective emissions.

This positive mood lasted well into the two weeks of negotiations in Lima, until it came to a crashing halt early on Saturday morning (well after the official ending time) with a text which was so bad that country after country started objecting to it.

It led to Peru’s environment minister, president of the 20th Conference of the Parties (COP20) to take over the process and called for an extra day of consultations.

This resulted in the end with the Lima Call for Climate Action which was adopted a full day-and-a-half after the official end of the two-week long COP.

This agreement was essentially a watered down, lowest-common-denominator agreement that is much below the expectations going in.

The best that can be said about it is that it keeps the show on the road until Paris next year.

I will, therefore, argue that COP21 to be held in Paris, France in December 2015, where a new agreement is expected to be negotiated (having failed to do so once before in Copenhagen) will indeed be the last-chance-saloon for the UN Framework Convention on Climate Change (UNFCCC).

Reality has moved on

Twenty years ago, when the UNFCCC was agreed, in climate change terms, is an era in which much has changed.

At that time the science from the Intergovernmental Panel on Climate Change (IPCC) was compelling enough for all countries to come together and to take action to prevent dangerous anthropogenic levels of climate change by reducing their emission of Greenhouse Gases (GHGs).

Since then, the science has become more urgent with the recent publication of the fifth assessment report (AR5) of the IPCC which has provided a strong sense of urgency as time is running out to prevent catastrophic levels of global climate change.

Another bout of reality is that climate change impacts are already happening around the world, including in rich countries.

As If we needed a reminder, the last three COPs in a row have occurred when the Philippines was hit by a super typhoon while negotiators were meeting in Doha, Warsaw and Lima respectively.

Fortunately this year’s Typhoon Hagupit was not as deadly as last year’s Haiyan.

Countries are thus now engaged in tackling the real adverse impacts of climate change rather than merely talking about action endlessly at the COPs.

On mitigation there is much greater action taking place in all countries to support greener and cleaner energy generation with countries like China and India leading the way.

Bangladesh, whose emissions of GHGs is miniscule, boasts one of the world’s fastest growing programmes of installing solar home systems.

Driven through public private partnerships, it has sold more than three millions systems in just a few years.

There are many more similar stories around the world.

The good news is that as countries make such investments in cleaner energy they find it is indeed a good thing for their own development as well as being good for reducing emissions of GHGs.

The purpose of agreement

The very purpose of having a global treaty like the UNFCCC to tackle a global problem such as climate change is for all countries to agree collectively to taking actions and hold each other to account in a some legal form.

The Kyoto Protocol was one such legally binding agreement which was agreed at COP3 in 1997.

The degree of legal “bindingness” of any agreement is therefore a key attribute of any successful agreement with a Protocol being the most legally binding and a “pledge and review” process much less binding.

What we seem to be heading for is a “pledge and chat” (ie without even any review) agreement which is even weaker.

Under such a regime countries need not bother to come to the COP but could simply e-mail in their voluntary pledges.

One of the key principles of the UNFCCC is that of “Common but Differentiated Responsibilities” (CBDR) which for some countries sets in stone the “differentiated” part within the Annex 1 (rich) countries in one category and the non-Annex 1 (the rest) countries in the other.

To hear some negotiators talk in Lima there is hardly any difference in their respective speeches from COP1 to COP20 they have been repeating the same speech for twenty years.

Some countries even said that not reaching an agreement in Lima would not be considered a “failure’ from their perspective.

This highlights a major difference between the least developed countries (LDCs), Africa and alliance of small island states (AOSIS)who are focusing on the word “Common” in CBDR principle (rather than the word “differentiated”) and some other countries who do not want any agreement at all.

This would make for some strange bed fellows (and would probably reflect the rich and poor groups better).

One of the key elements of any COP (and one that always gets resolved in the last few hours of the COP) is that on finance, specially the promises by the rich countries to provide finance to the poorer countries to tackle climate change (both for mitigation as well as adaptation).

This was also true in Lima.

However, it can also be argued that once the developed countries promised to provide 100 Billion US Dollars a year from 2020 onwards and all countries agreed to set up the Green Climate Fund (GCF) as the repository of these funds, there is no longer anything much left for negotiation in the UNFCCC COPs.

The countries that have pledged to provide the funds should simply deposit them to the GCF.

Indeed while we were in Lima the amount of money pledged to the GCF crossed the Ten Billion USD Dollars mark.

Coalitions of the willing

As it is so difficult to reach consensus within the UNFCCC negotiations process, more and more coalitions of the willing are emerging to take concrete actions to tackle climate change.

One such coalition was formed the year before Copenhagen by then President Nasheed of the Maldives, who set up the Climate Vulnerable Forum (CVF) with leaders from the three groups of vulnerable countries (namely AOSIS, LDC and Arica) as well as other vulnerable countries, to share action on tackling climate change (and not become another negotiating group).

Since then this group has moved on under the leadership of President Tong of Kiribati and then Prime Minister Hasina of Bangladesh and then the President of Costa Rice.

The purpose of the forum is for countries to share positive experiences of tackling climate change including both adaptation as well as mitigation.

As the UNFCCC Caravanserai moves on to Geneva in February next year and then to Bonn in June and possible another meeting in October before finally arriving in Paris in December, the negotiators will enhance their carbon footprint (while clocking up their own airmiles) while the outcomes are likely to remain disappointing.

One reason is inherent in the process of negotiations, which is that no country ever gives up anything until the very last minute.

So no matter how long the negotiations are allowed to go on, concessions will only be made in the last minutes of the last day in Paris (and that is if we are lucky).

So from my point of view, I sincerely hope that COP21 in Paris finally delivers the kind of agreement that we can all be proud of.

If not, it is time to call the process dead and to stop flogging the dead horse that the UNFCCC will become if Paris fails.