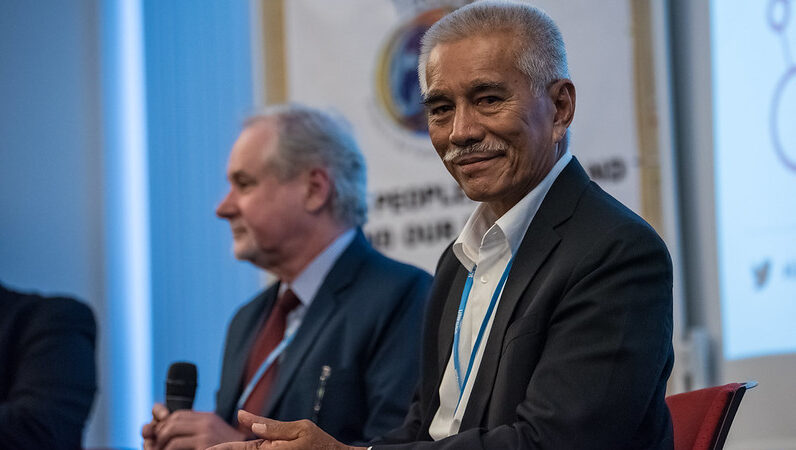 Anote Tong, former president of the Republic of Kiribati, is one of 16 commissioners to join the group (Photo: Benjamin Westhoff/German Development Institute/Flickr)

The Climate Overshoot Commission launched on Tuesday with a majority of members from developing countries.

It will address sensitive questions around the ethics and feasibility of ways to reverse warming. These include large-scale removal of carbon dioxide from the atmosphere and geoengineering technologies that could cool the planet by reflecting sunlight for example.

In a press release, the commission said that research indicates that “if these options supplemented emissions cuts and were governed well, they could help ward off harms to people and the planet”.

Commissioners will also consider the extensive adaptations needed to protect the vulnerable in a hotter world.

“All of us would prefer not to confront the consequences of insufficient action. To be clear, the primary strategy is and should remain the reduction of greenhouse gas emissions,” said the group’s chair Pascal Lamy, president of the Paris Peace Forum and former director general of the World Trade Organization.

“But we also have an overriding responsibility to be prepared, in case we do not succeed. That means considering and anticipating all potential responses that could minimise the damage and suffering, especially of the most vulnerable.”

The chances of limiting global temperature rise to 1.5C and "well below 2C" are slipping away without deep and rapid emissions cuts this decade.

At the same time, the Intergovernmental Panel on Climate Change (IPCC) has warned that a temporary overshoot of climate goals is dangerous for human societies and ecosystems.

"Countries’ pledges to date only put us on track for 2.7C warming by end of this century. It is high time to brace ourselves for this worst eventuality," said commission member Hina Rabbani Khar, Pakistan's minister of state for foreign affairs.

The commission said it will focus on ways to minimise climate risks from overheating that are evidence-based, resilient, just and equitable. It will consult a wide range of stakeholders, including civil society and youth groups with the assistance of scientific advisors.

The group is expected to present its first strategy on additional options to prevent catastrophic climate change and how to govern them ahead of the Cop28 climate talks in 2023.

The commission will initially be hosted by the Paris Peace Forum and is supported by Open Philanthropy, The Rockefeller Foundation, Cohler Charitable Fund, and LAD Climate Fund.

It will hold its first meeting in early June at The Rockefeller Foundation’s Bellagio Center in Italy.