The climate crisis is intensifying. So why is climate finance drying up?

Comment: As the IPCC warns of intensifying climate impacts, rich countries must deliver on their funding promises and set new commitments to the developing world 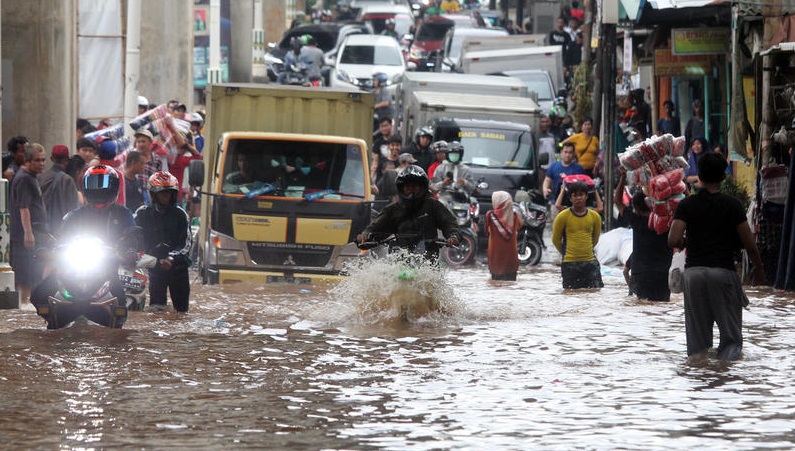 A flooded street in in Jakarta (Photo: Teddy Kroen/Greenpeace)

Around the world, from Greece, Canada and Germany to India, China and South Africa, unprecedented high temperatures, wildfires and flooding have destroyed homes and claimed the lives of hundreds of people in recent weeks.

As yesterday’s landmark report by the Intergovernmental Panel on Climate Change (IPCC) spells out, it is unequivocal – climate extremes are becoming more frequent and intense, and urgent action on a global scale is needed to avert climate catastrophe.

But in a recent series of key international climate meetings, rich countries  showed reluctance to put forward the funding needed to enable developing nations to cope with and respond to the climate crisis.

Twelve years ago, wealthy countries committed to provide $100 billion a year by 2020 for climate adaptation and mitigation in developing countries. Not only are they failing to deliver on that promise, 80% of the funds they are putting forward is in the form of loans or private finance, instead of grants.

Instead of announcing clear finance targets, wealthy countries fobbed the world off with pledges to “work together” to “deliver a plan” to meet the $100bn pledge.

When observers warn that delivery on climate finance is essential to a successful Cop26, this is because developing countries urgently need those funds to be able to respond to the climate crisis – and because consensus cannot be built on the crumbled foundations of broken promises.

But at the last GCF meeting, executive director Yannick Glemarec told the fund’s board members: “We used to have more money than projects. Now we have more projects than money.”

As funds dry up, the GCF, which was set up to distribute climate finance to developing countries, is considering the prospect of halving the funds available in 2022.

To make matters worse, vulnerable countries fear their proposals for adaptation projects are being turned down by the GCF technical panel on the basis that they could also be classed as “development”. They say the panel insists on arduous technical requirements and data collection that low-income and post-conflict countries simply cannot meet.

This artificial distinction between “climate adaptation” and “development”, and lack of understanding from the side of wealthy developed countries is creating further hurdles for those that urgently need adaptation support.

This failure by rich countries to meet their finance commitments is leaving impoverished communities in the lurch, paying for a crisis they contributed to the least.

In Bangladesh, climate impacts mean that by 2030 almost one million people will face displacement every year, even if Paris Agreement targets are met – and double that if not. Bangladesh’s per capita emissions are roughly one tenth those of the average person in the UK, and thirty times fewer than those in the US, Canada or Australia.

Climate finance will be critical for countries like Bangladesh to enhance the resilience of crops, lands and livelihoods to floods, droughts and cyclones, and to support individuals to weather those disruptions.

Adaptation does not only require investment in infrastructure, but also social protection in the form of job guarantees, retraining and re-skilling to adapt, as well as housing, food and cash support to bridge crises and prevent spiralling poverty when disaster strikes.

The paltry $100 billion pledge (and the failure to meet it) must be viewed in the context of the likely costs of climate action for mitigation, adaptation and addressing loss and damage.

The Intergovernmental Panel on Climate Change (IPCC) estimates costs of $1.6-3.8 trillion annually for transformation of energy systems alone between 2016 and 2050. The Global Commission on Adaptation (GCA) estimates that annual costs of adaptation are likely to be $180 billion a year between 2020 and 2030. And modelling from Climate Analytics estimates that the costs of climate-induced loss and damage will reach around $300 billion by 2030 in the Global South alone.

Set against the trillions needed each year, the $20 billion a year in grant-based finance provided by developed countries highlights the growing chasm between accelerating needs and broken promises.

Not to mention the fact that every year $40 billion more wealth flows from Africa to the global north in the form of resource extraction, tax avoidance and debt repayments, than is received in the form of aid, loans and remittances.

With the climate crisis entering a dangerous new phase of warming and impacts, rich countries must not only deliver on their promises, but set new commitments that are in line with the actual need.

Otherwise, the risk of a climate finance drought may leave Cop26 – and the potential for future climate action – in crisis.

Teresa Anderson is a climate policy coordinator at ActionAid International.