Comment: Almost every country rolled out measures such as cash transfers, food and sick pay to cope with coronavirus. Victims of climate shocks need the same support 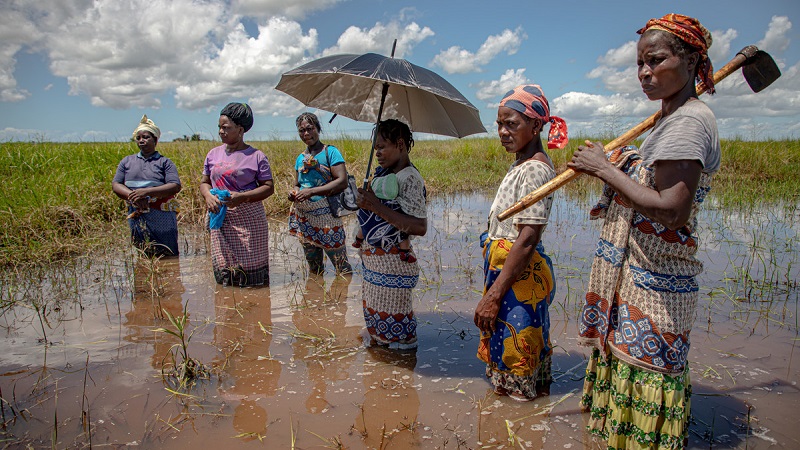 The concept of ‘social protection’ has not yet made it into mainstream climate thinking. But that is about to change.

Later this year, UN climate negotiations are scheduled to discuss its role in supporting and protecting the most vulnerable communities affected by climate-induced loss and damage.

Given that in 2020 almost every country in the world rolled out new social protection measures to help households and economies cope with the Covid-19 pandemic – including cash transfers, food support, sick pay, furlough pay and replacement school meals – the vital importance of such programmes to help communities weather crises has been proven beyond doubt.

It’s now time to make sure that countries put in place social protection systems that can respond to shocks caused by the climate crisis and ensure they are gender-responsive, as we know women, girls and the most marginalised are hardest hit by the impacts of global warming.

Too many communities on the frontlines of climate change are losing their livelihoods, their savings, their food security and their homes, as climate change disproportionally affects the global south.

People without deep pockets cannot cope with the loss of a season’s income or rebuilding of a home, and often find themselves sinking deeper into debt. They may not have the resources to plant crops next season. They may be forced to give up farming, leave their land, and migrate to urban areas where life may be even more precarious.

Women farmers make up nearly half of the agricultural workforce in Asia and sub-Saharan Africa. Yet their gender means they frequently face barriers in accessing land, finance, markets and agricultural support services, and may have extra responsibilities of fetching water and feeding families – making the challenges of climate change all the more extreme. The impacts of climate change can send households, regions and entire economies into a poverty spiral that is hard to break out of.

Social protection tools offer huge potential to help women, farmers and communities to become more resilient to climate impacts, to recover more quickly in the aftermath of disasters, or even to change jobs or relocate to safety if needed.

ActionAid and Rosa Luxemburg Stiftung’s new report Avoiding the Climate Poverty Spiral: Social protection to address climate-induced loss and damage outlines how such measures can help to safeguard human rights in a range of climate scenarios, and how governments and UN negotiations can put in place effective systems of gender-responsive social protection.

Schemes that can scale up to provide income support, food transfers or temporary employment in response to disasters can be a vital lifeline for farmers facing climate-induced crop losses, for example. One-off payments can help rebuild homes lost to flooding. Job guarantee schemes can be combined with the building of climate-resilient community assets and infrastructure, to help those facing loss of livelihoods as a result of sudden disasters or slow-onset impacts.

And there are many more forms of social protection that can be tailored to meet the needs of women and vulnerable communities, helping them to bridge the gap and get back on their feet more quickly.

Sometimes communities do receive this type of support after disasters, particularly from humanitarian agencies. But there is a clear need for systematic and comprehensive coverage, planned and implemented by governments, and primed to take action as quickly as possible.

Rather than waiting for disaster to strike and then starting from scratch, preparedness and early action can minimise the domino effect of deepening poverty that disasters can trigger.

Strategic design such as early warning systems to trigger early response to low rainfall, or inclusive community processes to reflect on changes caused by rising sea levels, can also help to address slow-onset climate impacts, which may take place gradually over many years, and are often less immediately visible.

If systems are not designed to specifically address inequalities and gender bias, however, women and marginalised community members can be left out of support systems and fall through the cracks. Policies and programmes must therefore take into account the reality of women’s daily lives, their responsibilities and barriers to participation, and make sure that inclusivity and gender-responsiveness are built into the system from the start.

It is increasingly recognised that ‘universal’ systems that offer coverage to anyone fitting certain criteria, are more effective at reaching the people in greatest need, than efforts to specifically target them, as the process to gather data on those with low incomes can be costly and inaccurate, while also spreading discrimination and creating additional barriers for marginalised households.

Alongside adaptation and disaster risk reduction approaches, therefore, governments’ strategies to minimise and address loss and damage must include putting in place gender-responsive social protection systems that are universal and designed to respond to shocks such as those caused by climate change.

With the UN’s Warsaw International Mechanism on Loss & Damage (WIM) scheduled to discuss approaches to risk management later this year, the time is right for governments to support and scale-up social protection systems that can help communities recover more quickly from the escalating impacts of climate change.