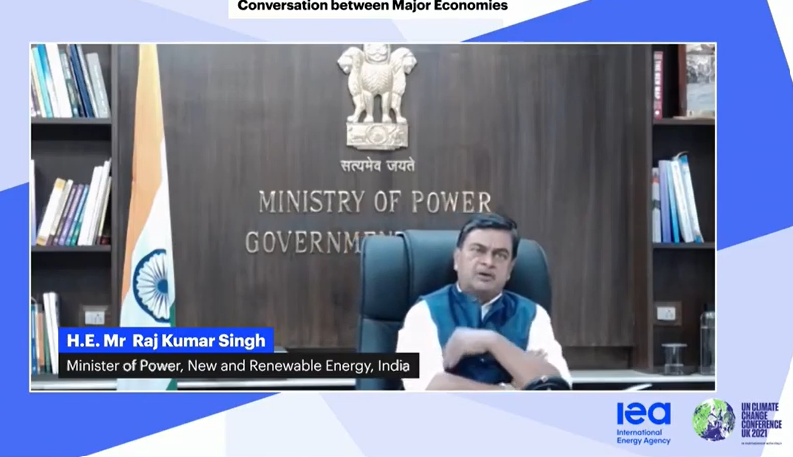 India’s power and renewable energy minister has called out rich nations for committing to cut their emissions to net zero without translating their ambition into short-time action.

Raj Kumar Singh described net zero goals as “pie in the sky” during a global summit hosted by the International Energy Agency (IEA) designed to create global momentum for achieving net zero emissions by the middle of the century.

The virtual ministerial dialogue was attended by more than 40 ministers from large emitting nations.

“You have countries whose per capita emissions are four times, five times, six times, 12 times the world average,” Singh said during a panel discussion with China’s energy minister Zhang Jianhua, US climate envoy John Kerry and the EU’s Frans Timmermans, which have all backed net zero goals.

Singh’s comments come as India is facing mounting diplomatic pressure to set its own net zero goal ahead of the Cop26 climate talks in Glasgow, UK, in November.

Opening the meeting, Cop26 president designate Alok Sharma called “on all countries to commit to a net zero world”. “Not enough is being done to meet that net zero target,” he told ministers. “We must do much more now to turn remote targets into immediate action. We simply cannot afford another decade of deliberation,” he added, insisting on the need for short-term ambition.

Speculation on Indian plans for net zero has been rife. Recent reports suggested government officials close to Modi were considering setting a net zero goal for 2050 or 2047. But earlier this week, government sources told Reuters that India is unlikely to bind itself to a net zero target by 2050.

“That speech by RK Singh Power Minister at the IEA #NetZeroSummit should put all speculations on India and net zero to rest,” tweeted Swati Dsouza, a Delhi-based energy consultant.

Net zero targets have come under growing scrutiny from experts and campaigners, who have denounced commitments made 30 years into the future that don’t include transformative action to cut emissions in the short term.

Isn’t it funny that the same people who are calling us naive for believing change is possible are the ones who believe fossil fuel companies, big polluters and oil producing nations will ”fix” the climate- and ecological crisis with their vague, distant ”net zero” commitments…?

Sunil Dahiya, analyst at the Center for Research on Energy and Clean Air, told Climate Home News that it was important that countries’ net zero strategies included interim targets for the next five and 10 years.

“Without that it’s difficult to gauge the progress towards net zero and hold countries accountable towards these ambitious targets,” he said.

Writing in Nature, Joeri Rogelj, one of lead authors of the 1.5C IPCC report, warned against setting “vague” net zero targets. “The stakes are too high to take comfort in mere announcements. Without more clarity, strategies behind net-zero targets cannot be understood; nor can their impact be evaluated,” he wrote.

Minister Singh argued that developing countries could not be expected to commit to net zero when they have contributed very little to historic emissions and are heavily reliant on carbon-intensive sectors such as steel and cement to grow their economies.

“The developed world has occupied almost 80% of the carbon space already. You can’t say that [developing countries] have to come to net zero. No, sorry – they have to develop,” he said.

In response, Timmermans said that there is huge potential for developing nations such as India to leapfrog polluting technologies and meet their energy needs, without increasing their carbon emissions.

“Some countries are resisting [decarbonisation] despite the fact that we’re looking at the biggest job market the world has ever known,” Kerry said. “This is the greatest economic opportunity we’ve ever had to build our countries.”

The world’s third largest emitting country after China and the US, India has so far resisted setting a more ambitious 2030 climate goal despite pressure from the UN and UK Cop26 host for every nation to improve its climate plan ahead of Glasgow.

Kerry said the US would announce a “strong” 2030 target on 22 April, when president Joe Biden is hosting a leaders’ climate summit. Indian prime minister Narendra Modi is among 40 world leaders invited. The US said it had urged participants to use the summit as an opportunity to outline how they will contribute to stronger climate ambition.

“As far as we are concerned, we have one of the fastest growing renewable capacity in the world. We are well on the way to achieving what we have set out to do,” Singh said.

India is on track to exceed its target of delivering 450GW of renewable energy by the end of the decade but it continues to expand its coal capacity, recently holding an auction for new coal blocks.

“We will need global finance to mitigate the negative impacts of the transition on livelihoods and to bring costs of new technology lower. This is true for India and for all developing countries,” she said.