Comment: International Women’s Day on March 8 is a chance to start solving a deep inequality: women are more vulnerable to climate change than men 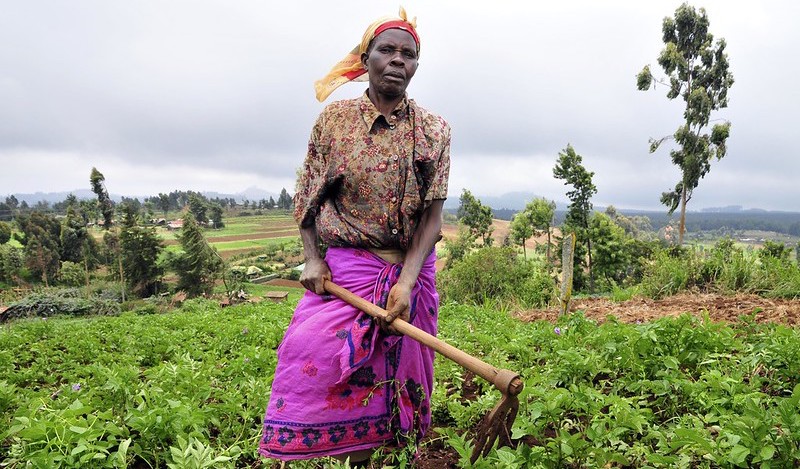 Tilling a field in the Mount Kenya region (Photo: ©2010CIAT/NeilPalmer/Flickr)

The 2020 International Women’s Day theme: I am Generation Equality: Realising Women’s Rights is closely linked to climate change impacts and the need for ambitious climate action.

As the global community assesses progress made for women’s rights during the 25th anniversary of the Beijing Platform for Action, it is timely to take stock of the gendered nuances of climate impacts, how gender equality is affected by the climate crisis and how women are playing leading roles in climate action.

There are ample examples from across the globe that underscore how differently climate change impacts women and men, particularly in the global south.

In the aftermath of disasters, women are more likely than men to be displaced, to be sexually assaulted, to be victims of violence and to face other human rights violations.

In many regions, women are more likely than men to conclude formal education early, making them less informed about climate change and less likely to be involved in decision making that will affect vulnerability.

Women are also more affected by drought and water shortages, often bearing the burden of having to spend significant time travelling to distant water resources and returning home to provide water for their families.

In the Amazon rainforest, the second death of Chico Mendes

Girls are also more likely than boys to be provided with less food during times of food scarcity, thus making them more susceptible to malnutrition and diseases, particularly vector-borne diseases, that are made more prevalent by climate change.

However, women are not more vulnerable to climate impacts simply because of their gender, but because of a range of factors. Characteristics such as age, levels of poverty, ethnicity and marginalisation in combination with gender intersect to result in higher vulnerability for women.

Acknowledging this intersectionality underscores that women are not inherently vulnerable, but that there are complex power relations and socio-economic characteristics that result in climate impacts being experienced differently.

For example, societal norms have led to limited livelihood options for women who depend on resources that are affected by climate change.

In East Africa, drought has resulted in pastoral farmers having to travel significantly further to find water.

While women would normally be part of these groups, the increasing distances have resulted in the exclusion of women, as they must be able to return home in order to care for family members. This exclusion negatively affects the financial income of women as well as the food security of households.

In Pakistan, monsoon rains and flooding have destroyed cotton crops with negative impacts on all farmers.

However, while men are able to migrate to find work elsewhere with higher wages, women are not able to relocate due to family caretaking commitments. Women are thus obligated to work for lower wages due to their family responsibilities, resulting in income insecurity and inequality.

The expectation on women to provide family care also has uneven effects during times of disaster.

In Indonesia, the 2004 tsunami claimed four times as many women’s lives as men’s and is a sobering example of how family responsibilities can have dire implications for women.

Women spent more time trying to save their children, which slowed down their efforts to flee the tsunami.

They were also far less likely than men to be able to swim, further decreasing their chances of survival. While this tsunami was not triggered by climate change, impacts of tsunamis are expected to intensify due to climate induced sea level rise and loss of coastal ecosystems.

The growing understanding of the unequal implications of climate change for women has led to concentrated efforts to consider gender when dealing with its impacts.

For example, the UN Climate Change Gender Action Plan aims to support the “full, equal and meaningful participation” of women in the implementation of the UN climate change convention and to mainstream a gender perspective in the work of the UN body.

Similarly, the Green Climate Fund’s gender policy supports gender-sensitive approaches in its processes and operations, including the need for projects and programs to specifically address gender concerns.

In addition to global efforts, women from communities around the world are getting in formation and leading the transformative change needed to tackle the climate crisis.

In the Western Balkans, rural women are being empowered to take part in decision making about climate change that directly affects their wellbeing.

In Fiji, women’s groups are leading adaptation measures at the community scale, improving the resilience of market vendors against cyclones, floods and drought.

In the Caribbean, civil society organisations are integrating gender perspectives into their varied work and supporting the development of gender-sensitive policies and programmes.

This International Women’s Day is an opportunity to reflect on how women around the world are affected by climate change and the various initiatives that are being implemented to reduce their vulnerability.

Moving forward, it is critical that all climate action takes a meaningful gender-responsive approach.

This means moving beyond efforts to ensure that women and men are equally represented on discussion panels, or that projects and programmes benefit similar numbers of men and women.

We must ensure that we address underlying structural power relations and socio-economic marginalisation that lead to women around the world being more significantly affected by climate change.

Adelle Thomas is senior research associate, Climate Analytics and director of the Climate Change Adaptation and Resilience Research Centre, at the University of the Bahamas.