For the vulnerable, UN climate talks are no longer fit for purpose

Comment: I have been to all 25 UN climate conferences. I won’t be attending next year unless major changes are made to achieve real action 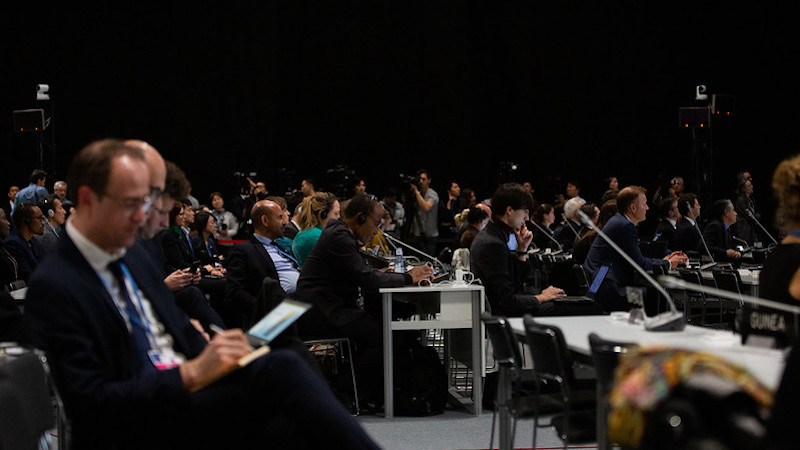 A midnight plenary on Saturday 14th of December - the day after the Cop25 talks were scheduled to finish (Photo: UNFCCC)

Having just returned home from my 25th consecutive UN climate talks in Madrid, I am now prepared to declare the decision making process in these annual jamborees is no longer fit for purpose.

Let me explain why.

Cop25 was the longest Cop ever, having gone on for two extra days (and nights) beyond the originally planned twelve days.

This tendency, now standard practice at Cops, to take the negotiations into overtime for a day or more is not only extremely inefficient but is also deeply unfair to the most vulnerable developing countries whose delegates cannot stay on. Thus the decisions made in the last hours of extra time are invariably detrimental to their interests and by the time they get home and see the final text they see their words have disappeared.

It is also logical that any decision finally arrived at on the extra day could have been agreed the day before. The reason for pushing it into extra time is a quite deliberate tactic to get rid of the poor and vulnerable country delegates.

If the Cops are to retain any semblance of fairness then the incoming UK Cop26 presidency should declare that next year’s talks in Glasgow will finish on time on Friday and anything left undecided will be dealt with at Cop27. If all night negotiations are needed to get a decision let them happen on Wednesday and Thursday night and not on Friday and Saturday nights.

In fact it may be time to rethink the entire process of the annual Cops and perhaps take up the concept of ‘inside out’ Cops which I advocated for after we achieved the Paris Agreement at Cop21 when I argued that actions to implement the agreement should be given greater prominence than further negotiations on agreeing how to implement it.

In this model, the many actors including civil society, companies, cities, universities, indigenous communities, youth and others should be given the main plenary halls to showcase their actions while the official negotiators could stay in the smaller rooms into the late hours arguing over comas and words.

Perhaps the government of Scotland could consider holding such an ‘Action Cop’ in 2020 in parallel to the UK’s official Cop?

However, my main reason for declaring the Cop process no longer fit for purpose is the fact that 2019 is the year that the reality of climate change all over the world overtook climate talks. Until now it was reasonable to meet every year in anticipation of being able to agree to take actions to prevent the worst impacts by both mitigation as well as adaptation actions.

Our failure to rise to this challenge, by assuming that we had plenty of time left, was clearly wrong and we are now entering the world of real loss and damage due to human-induced climate change that is clearly attributable to the emissions of greenhouse gases.

The failure of Cop25 to even recognise this reality and allow the Warsaw International Mechanism (Wim) on loss and damage to have an implementation and financing arm as demanded by the vulnerable developing countries, was an indicator of how out of touch with reality the negotiations have now become.

The people who really understand, because they can see it happening, namely the scientists, children and poor people in all countries, were marching with Greta Thunberg in their thousands in Madrid last Friday. And even though the Cop presidency invited Greta inside the Cop to speak, the negotiators listened politely and then completely ignored what she had to say and went back to their normal processes of negotiating over trivialities while ignoring the reality outside.

A final comment on the lack of fitness of the Cops is that whereas there used to be some signal (at least in rhetoric) from the rich and powerful countries (most of whom are major emitters of greenhouse gases) that producing a just agreement was important, this facade has now been completely removed. US president Donald Trump is the most egregious example, but there are many more who are now quite blatantly playing the game on behalf of the fossil fuel companies that support them.

All this time the main reason for the most vulnerable developing countries to have any faith in the UN climate process was that it was the only place where they had a seat at the table and could raise their voices.

The process has been totally and cynically destroyed for them now and so it is questionable whether they should even make the effort to attend anymore.

I myself have resolved to only attend an ‘Action Cop’ if it takes place in Glasgow next year.