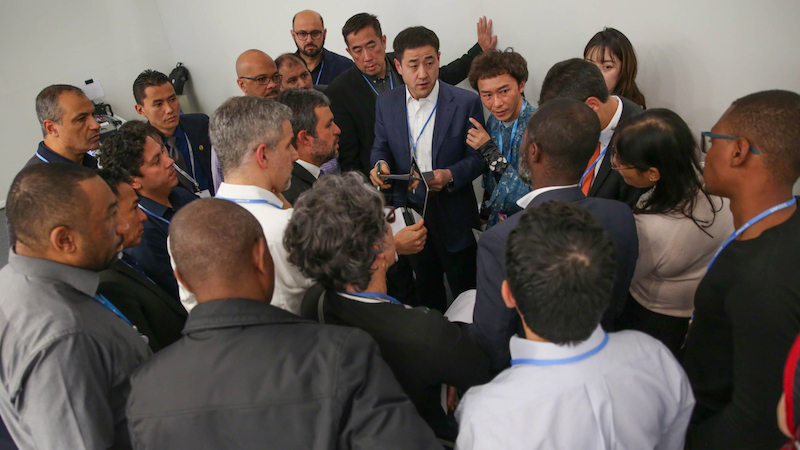 As countries pour billions of dollars into climate projects around the world, claiming credit for the carbon cuts, what happens to the communities in their path?

Yet protections are being weakened, not strengthened, at Cop25 in Madrid.

A special request to all our subscribers. If you value our coverage from Madrid, please help this newsletter reach more readers. Put this message, or something like it on your social media accounts:

“As UN climate talks come to the crunch this week, Climate Home News’ Cop25 newsletter is a must read. Subscribe here: https://www.climatechangenews.com/newsletter-sign-up/”

*** From We Mean Business: WBCSD’s Maria Mendiluce and our call for bolder climate action in 2020

Business will be vital to achieving systems transformation at the scale we need. But how can we move beyond ambition to real action? Companies need to work harder, together to overcome the barriers to decarbonizing our economy. WBCSD’s managing director for climate & energy, Maria Mendiluce discusses her hopes for 2020, the ‘super year’ for climate and sustainability. ***

Get in touch. Tweet us at @chloefarand and @karlmathiesen. Or email [email protected] or [email protected]. And please help CHN by sharing our articles. If you want to share this newsletter it will be posted on the CHN website later each morning.

Now, on with the news…. It’s the start of the second and final week of Cop25 and we thought it was a good moment to take stock of progress.

A new text on global carbon markets, or Article 6, initially expected on Friday morning, finally landed on Saturday evening. The options were whittled down but all major sticking points remain. Ministers, who take over the talks after Monday, will have to leverage political power to hope for a breakthrough.

The latest text on addressing loss and damage (explainer here) summarises the range of views on how to provide finance to vulnerable countries recovering from extreme weather events or slow-onset impacts such as sea level rise. The creation of a bespoke funding facility makes the list but doesn’t have the support of developed countries like the US and Australia. Meanwhile a group of developing countries and China, known as the G77, is calling for an expert group to be set up to explore further financing options.

An outline draft text on a Cop25 decision reflects efforts to keep ambition at the top of the agenda. The draft text, which could change significantly by the end of the week, stresses the need for science to underpin climate action and calls for more ambitious climate pledges in 2020. The final text will provide a key signal on ambition ahead of next year’s Cop26. One to watch.

Meanwhile, discussions about who deserves “special circumstances” and additional support to respond to climate change rumble on. Last week an informal consultation was set-up to consider the special needs of African but not Latin American countries, causing some unhappiness.

Ambassador Mohamed Nasr, of Egypt and chair of the African Group, insisted the continent’s “competing needs” of economic development and commitments to curb emissions should be taken into account.

“Africa is just demanding what it deserves,” said Augustine Bnatar Njamnshi, from the Pan African Climate Justice Alliance. “Rest assured it wouldn’t take anything away from anybody else.”

There is a developing country push for Cop25 to ban the use of ‘carry-over credits’ from the Kyoto Protocol to meet Paris Agreement targets. The idea here is that overshoot achieved under the precursor deal should still count. But most countries have said this is not within the ‘spirit of Paris’. There is only one country explicitly planning to do this: Australia. Read more here.

Commenting on the state of the talks, Tosi Mpanu Mpanu, a senior negotiator from the Democratic Republic of Congo, told Climate Home News some meetings had become “talk shops”.

“We haven’t really walked the walk,” he said. “It is important that we do not give a spaghetti plate to our ministers where they don’t know where to start because everything is completely intertwined and they don’t know how to handle it.”

At worst, Mpanu Mpanu said ministers should leave Madrid with “a general agreement that could set in motion some type of a work plan that allows us to finalise the nitty gritty”.

Away from the negotiations, Sue Biniaz, a former state department lead climate lawyer who played a key role in designing the Paris Agreement, reflected on the US withdrawal from the  accord.

“I really thought we had constructed an agreement that would meet the needs of any US administration,” she said. “At worst, they could have stayed in with a changed target.”

What to watch out for on Monday…

The closing plenary of the talks’ different work streams is planned for Monday afternoon. Tensions have been building over the slow progress of the last few days and this could be the time it spills over into the open. The livestream can be found here.

The second of four ministerial high-level events is a meeting of finance ministers. A coalition of finance ministers for climate action was launched by Finland and Chile in April with the aim to bring climate considerations into the mainstream of economic policy.

The three-hour afternoon event has a packed schedule of high-level speakers. A number of ministers are due to attend. Luxembourg’s finance minister Pierre Gramegna, Paraguay’s vice minister of economy Humberto Colmán and Bettina Hagedorn, Germany’s parliamentary state secretary at the ministry of finance are scheduled to make an intervention. Watch out for possible announcements of higher ambition.

The UN agenda for Monday is here.

That’s it from us. Have a great day.