New Zealand’s farmers have a chance to be climate leaders

Comment: A separate target for methane from sheep and cattle has been painted as a sop to farmers; on the contrary, it puts the onus on the sector to curb warming 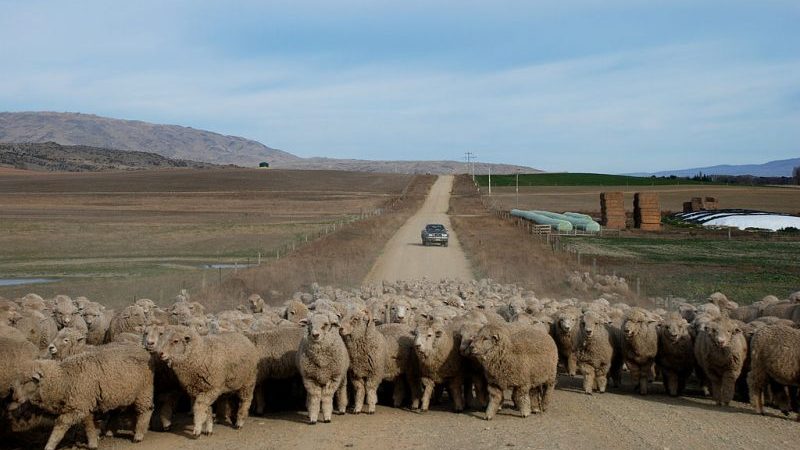 New Zealand has around five sheep to every person (Pic: Wikimedia Commons/Phillip Capper)

New Zealand’s new 2050 climate targets are good news, as the country’s contribution to global warming could be halted before 2050 if the stated cuts start immediately.

New Zealand has an unusual mix of greenhouse gas emissions (unusual for a developed country, that is), as it has large numbers of sheep and cattle, which produce methane from digesting grass. These provide an opportunity for making rapid progress on the country becoming climate neutral.

A draft climate law published last week after extensive consultation, which singles out methane for a separate target, should be welcomed. Instead some have inaccurately interpreted it as a free pass to farmers.

If this truly were a concession to farmers, then nitrous oxide (released from manure and with a longer-lasting and more potent climate impact than methane) would not be required to reach net zero emissions. However, it is.

The government’s proposed methane emissions target is a cut of 24-47% by 2050, compared to “net-zero” for other greenhouse gases. It would be a compromise if methane affected the climate in the same way as carbon dioxide. However, it doesn’t.

The New Zealand government knows this, as do their scientific advisers, which is why they have come to a scientifically informed target, which is more akin to “net zero warming”.

Analysis: How can the biodiversity and climate crises be tackled together?

If you judge the targets on contributions to warming from each of the greenhouse gases, you come to the conclusion that farmers are being asked to do more to reverse global warming than CO2-emitting industries (everyone else).

What does the government’s proposed methane reduction target mean for temperatures, alongside the other net zero targets?

Let’s imagine we start from today’s emissions and we draw a straight line to the 2050 targets, reducing emissions steadily over the whole 31 years. What would this mean for New Zealand’s contribution to global warming?

For CO2 and other long-lived greenhouse gases, every single year until 2050 they will be contributing more to global warming. As the emissions stay in the atmosphere, the amount in the atmosphere builds up and the warming increases year on year.

If New Zealand’s CO2 emissions remain zero from 2050 onwards, the warming from NZ-sourced atmospheric CO2 will remain almost constant over the following decades and even centuries. You have to actively remove the CO2 from the atmosphere to reduce its impact on temperature. Even if the whole world goes to net-zero CO2 emissions by 2050, the accumulated CO2 in the atmosphere will still take many thousands of years to return to preindustrial levels.

Methane is very different, as its lifetime is around a decade. That means that net zero global anthropogenic emissions of methane would lead to atmospheric methane concentrations reverting to natural levels within a few decades. Reducing methane emissions is therefore a rapidly effective way of reversing global warming, as any decline in methane emissions that is faster than about 0.3% per year will actually cause a reduction in global mean temperature.

This is a fundamentally important point and the cooling from reducing methane emissions should be correctly valued in mitigation plans, which would then allow them to be incentivised based on their climate impacts.

Suppose New Zealand’s farmers hit the lower end of the target range, cutting methane 24% by 2050. That decline in methane emissions would actually generate enough cooling to compensate for the warming generated by all the non-methane greenhouse gases emitted by New Zealand as they approach net zero.

In other words, the 24% reduction in methane would offset the warming impact of all the other emissions. New Zealand could declare itself climate neutral almost immediately, well before 2050, and only because farmers were reducing their methane emissions. That’s a free pass to all the other sectors, courtesy of New Zealand’s farmers.