Comment: In a new book, Ed Davey finds examples the world can follow to respond to the moral calls from activists Extinction Rebellion and Greta Thunberg 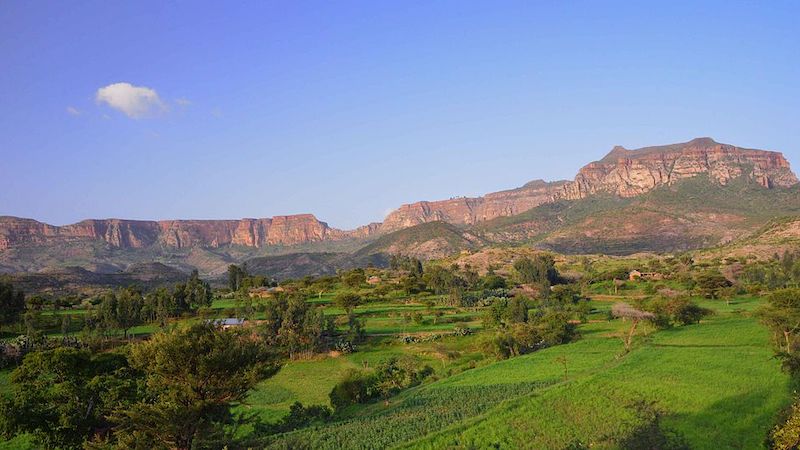 Tigray province in Ethiopia was once the site of desperate famine, but careful land restoration has brought it back to life (Photo: Wikimedia Commons/Yogesh Mhatre)

Some 35 years ago, in the year 1984, Ethiopia was in the midst of an acute famine, leading to the loss of at least 400,000 lives and an international humanitarian campaign which people remember to this day.

The journalist Michael Buerk, reporting for the BBC at the time, described the scenes in parts of the country as ‘a biblical famine in the 20th century’. And while the causes of that famine were in large part political, its extent and severity were also exacerbated by a changing climate and by poor natural resources management.

Today – while over 8 million Ethiopians remain food insecure and the prospect of acute hunger still stalks the Horn of Africa – the government of Ethiopia has embarked on a national effort to restore at least 15 million hectares of agricultural land, as part of a set of measures to ensure that famine will never take place again. Prime minister Abiy Ahmed has made rural growth and job creation a priority of his government.

His government has also strengthened its commitment to a national programme intended to make Ethiopian agriculture more sustainable and productive, generating better livelihoods and value chains for farmers, while taking pressure off the country’s remaining forests, wetlands and other ecosystems.

In a number of areas of this beautiful and diverse country, communities which have restored land have already been shown to be more resilient to drought, as well as more able to produce the food they need to sustain themselves. Restoration activities have also created more jobs, led to the replenishment of groundwater sources and fostered a stronger sense of attachment to the land.

The entity in charge of this effort – Ethiopia’s Agricultural Transformation Agency – is a model for agricultural development which other countries now seek to replicate.

In a short book published today – ‘Given Half a Chance: Ten Ways to Save the World’ – I seek to describe a number of examples from around the world in which humanity has found a new way, seemingly despite all the odds, of living in harmony with the natural environment upon which we all depend.

In renewables, we can look to solar energy in Nevada, the UK and Kenya; the efforts of Mission Innovation to deliver on the technologies of the future; the campaign to leave oil and gas in the ground. On forests and soil, I find examples from the Gola Rainforest, Colombia and Canada where we are protecting and restoring the world’s temperate and tropical forests, or – in the UK, Sub-Saharan Africa, Australia and France – managing the soil and agriculture for the long-term.

The aim of the book is to demonstrate some of the many amazing things happening right now, across the world, to put humanity and the planet on a better course. The challenge is to act now, with unprecedented commitment, vision and determination, to bring these efforts to scale, fast. In so doing, we can respond to Greta Thunberg’s and Extinction Rebellion’s call to action – and show that another future is possible.

Back in Ethiopia, one area in particular – the northern Tigray region, particularly gravely affected by the famine from 1983-1985 – has shown the extent of what is possible in restoring the earth. As a result of remarkable leadership from the community leader Aba Hawi, the Abreha we Atsbeha community has brought back water and vibrant colour to what was once a desolate landscape marked by drought and human suffering. The establishment of soil and water conservation structures on the hillsides to counter soil erosion, coupled with the planting of trees and shrubs, ensures that every drop of water that falls during the region’s two-month-long rainy season is captured in the soil. Communities also earn precious income from the honey and the fruit trees they produce.

The Faidherbia albida tree has been instrumental to the restoration achieved: this species sheds its leaves in the wet season and regains them in the dry season, when fodder is scarce, providing shade and nourishment to the soil. The African juniper, the sand olive and the avocado tree have also been used to great effect in the restoration of the landscape. Bench terraces, with deep trenches dug by community volunteers, have improved the recharging of groundwater, with waterfalls and natural springs appearing again. Sections of the land have also been closed off to allow natural regeneration to occur, ensuring that the free grazing of livestock does not come at the expense of the young trees and saplings.

The restoration of these iconic areas in Ethiopia, while still ongoing, has been an astonishing achievement, and an enduring inspiration for the rest of the world to follow: an area associated with human tragedy a few decades ago is now home to viable rural communities drawing a sustainable living from the land, and seeking to remain there for the future.

Edward Davey works for the World Resources Institute, and writes here in a personal capacity. His book ‘Given Half a Chance: Ten Ways to Save the World’ is published by Unbound on 18th April 2019.