Comment: How did Poland, one of Europe’s strongest advocates for coal power, end up with one of the world’s strongest carbon prices?

Strange as it may sound, the coal-promoting host of this year’s climate negotiations, Poland, has one of the strongest carbon prices in the world.

The reason is largely one of economic self-interest. Understanding it can provide lessons for how other nations of the world can be incentivized to reduce greenhouse gas emissions.

Poland is a participant in the European Emissions Trading System (EU ETS). That means it imposes a carbon price on its power producers, heavy manufacturers, and intra-European flights, that is currently around $25 per ton of CO2.

Several countries have higher carbon prices but most tend to exempt large emitters such as power producers. Only the UK and British Columbia have carbon prices that broadly cover electricity producers and are higher than in Poland.

This is all the more striking given Poland’s political and economic profile. The country derives 80% of its electricity from coal. It is governed by the Law and Justice Party, elected on a platform to support coal. Strong unions allow coal miners to wield an unusual amount of political influence. For the government, coal is also a matter of national security as it offers an alternative to natural gas piped from Russia. In part thanks to its domestic coal resources, Poland has the third lowest energy import dependency in the EU.

Poland did not adopt carbon pricing on its own. Instead, it joined the EU ETS because it had to do so if it wanted to be a member of the European Union. To reap the benefits of the EU, including the European single market, and its free movement of goods, Poland had to transpose all European legislation, including any climate policies, into national law.

And Poland was not alone. Ten countries joined the EU in 2004: the Czech Republic, Estonia, Hungary, Latvia, Lithuania, Slovakia, Slovenia, Cyprus, Malta, and Poland. Since then, three more have become members: Bulgaria, Romania and Croatia. Before any of these nations joined the EU, the EU ETS had been negotiated by 15 mostly Western and Northern EU countries (likely one of the reasons behind the successful implementation of the carbon market). 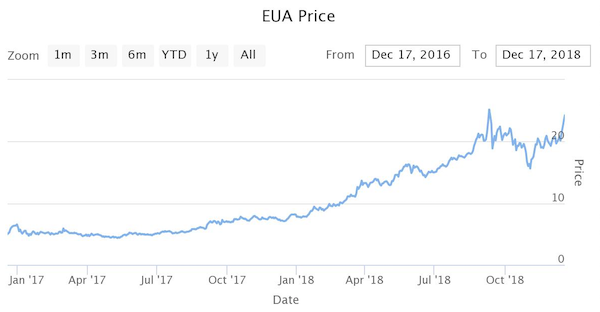 The fact that the EU spread carbon pricing to Poland and the other twelve most recent EU members is perhaps one of the greatest climate policy victories, but it is rarely, if ever, talked about. To understand its significance, let us make the assumption (reasonable, to a close approximation) that none of the aforementioned countries would have implemented carbon pricing on their own. Summing up the countries’ EU ETS emissions, we find that their inclusion in the EU effectively placed a carbon price price on around 430 million tons of CO2 per year, according to Refinitiv data as of 2017. This is on par with the total annual greenhouse gas emissions of California.

Admittedly, there are diverse reasons a country joins the EU. But trade benefits and foreign investment are usually among the top rationales. Thus, this European experience demonstrates a powerful strategy for climate diplomacy: the use of international economic policy to spur climate policy adoption.

There are diverse ways to leverage foreign economic policy for progress on climate mitigation. One tactic may be to link membership in trade agreements on climate policy implementation, mimicking the EU approach. Another, yet untested approach, could be to levy border carbon tariffs on nations with less ambitious climate policy, making sure to design such policies for legal durability.

This brand of climate diplomacy can be categorized under the notion of carbon clubs: small groups of nations that coordinate climate policies and share exclusive membership perks. Viewed from this perspective, the EU is, inadvertently, the largest and most closely-knit carbon club. As scholars like David Victor have argued, this type to climate diplomacy can be a more effective way of encouraging policy adoption in reluctant nations than the universal, voluntary, and pledge-and-review nature of the Paris Agreement.

As another round of climate negotiations ends in Katowice, with countries off-track toward the goals of the Paris Agreement, new and complementary strategies for climate diplomacy are needed. The case of the EU and Poland suggests that carbon clubs, bound by exclusive economic perks, can be an effective pathway toward climate policy implementation in reluctant nations.

Emil Dimantchev is a senior research associate at the MIT Center for Energy and Environmental Policy Research (CEEPR). The views expressed here do not necessarily represent those of CEEPR. The author thanks Michael Mehling (MIT CEEPR) for comments on this article.