Comment: Only an ambitious policy, backed by technologies that remove carbon from the air, can bring the EU in line with the Paris Agreement temperature goals 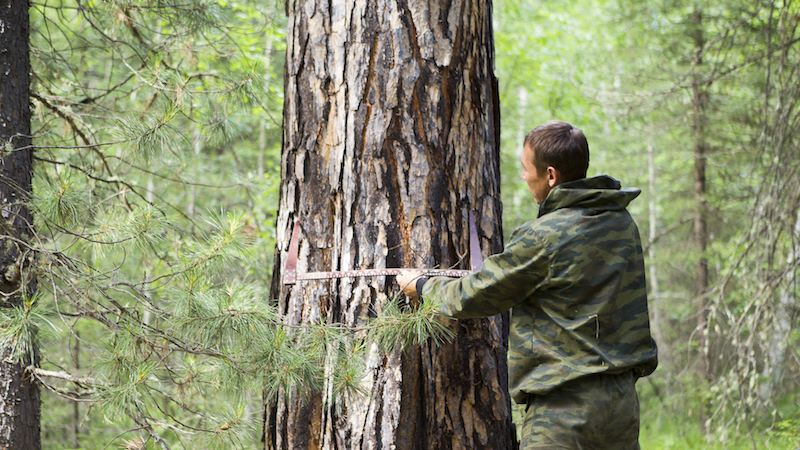 Most modelled emission scenarios that meet the Paris Agreement’s 1.5-2C targets include large-scale deployment of carbon dioxide removal (CDR) throughout the 21st Century.

While afforestation has been a part of climate policy for decades, the development of other CDR technologies such as Bioenergy with Carbon Capture and Storage (BECCS), Direct Air Capture and Storage (DACS) or Soil Carbon Sequestration (SCS) is still in its infancy. No country is presently pursuing substantial research or regulatory support in this area, not even an international climate policy leader like the EU.

Critics usually present CDR as an unreliable magic bullet, a potential moral hazard that will deter serious mitigation efforts or an intervention with side effects worse than the climate change impacts it tries to prevent. But such generalised statements usually ignore that the problem is not the technologies, but the scale they are assumed to be deployed. Therefore, it is important to assess and decide in which climate policy strategy CDR should be embedded.

In this context, is useful to distinguish between gross and net negative emissions. Models currently find that for meeting a 1.5-2C target global CO2 emissions will have to reach net zero in the second half of the century and go deeply into negative territory afterwards.

Net zero emissions represent a balance between sources and sinks of greenhouse gases, implying that there remain some residual gross positive emissions, stemming from fossil fuel use, industrial processes or agriculture that may be prohibitively expensive or even impossible to mitigate (sources). These need to be offset by gross negative emissions (sinks) that could come from natural (e.g., SCS) or engineered sinks (e.g., DACS).

Under the EU’s current 80-95% by 2050 reduction target it is not imperative to discuss CDR politically since this ambition level can in principle be achieved through conventional mitigation measures alone. Only a more ambitious economy-wide headline target, essential to achieve the Paris Agreement’s temperature goal of 1.5-2C, can ensure that CDR will enter the EU’s climate policy agenda. Following the release of the European Commission’s proposal on Wednesday for a new long-term climate strategy this is going to be discussed within the EU, and decided by 2020.

Global mitigation pathways consistent with 1.5-2C indicate that the EU would deliver cumulative CDR of at least 50 Gigatonnes CO2 by 2100, more than ten times the EU’s current annual emissions. A comprehensive CDR approach would embrace this challenge by openly acknowledging that the EU would have to reach reduction targets of far more than 100% in the second half of the century to help limiting the global temperature increase to at least 2C, and that this is only possible with huge amounts of CDR – a significant political challenge for EU policymakers.

Different from global scenarios a limited CDR approach would focus on the path towards net zero emissions. Putting the goal of reaching and maintaining a balance between emissions and removals centre stage, the focus would merely be on offsetting residual emissions from industry, transport and agriculture through comparatively limited amounts of CDR. To address concerns that a deliberate CDR policy might weaken conventional decarbonisation, the EU could split its net zero objective into sub-targets for reducing emissions and for enhancing sinks, e.g. with a 90-10 or 95-5% ratio that could be seen as a smooth extension of the EU’s current long-term target. 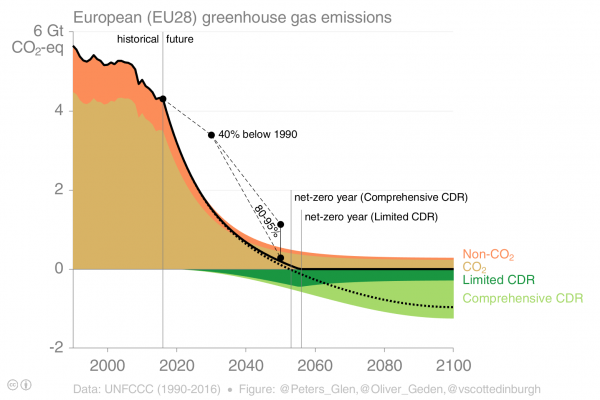 Focusing on CDR in the context of net zero could facilitate public authorities (perhaps at city or regional levels) and companies re-setting their objectives to go beyond present claims of ‘100% renewables’ and aiming for full ‘climate neutrality’. Such initiatives would probably avoid potentially controversial and complex BECCS facilities, and more likely start with extending current emissions offsetting practices like afforestation and introducing other forms of small-scale terrestrial CDR, highlighting local ecological or agricultural co-benefits.

Conceptually combining CDR with the logic of net zero emissions would introduce a sequential political strategy. A decarbonisation approach that intends to lead to a low level of residual emissions as soon as possible (to be tackled by a pragmatic phase-in of CDR) should be the priority of EU climate policy. Only in a subsequent step, would it make sense for the EU to scale-up the deployment of CDR technologies considerably. Aiming for an EU emissions reduction target of more than 100% could be an integral part of a global climate recovery strategy that helps meeting the 1.5-2C target.

But to be successful, such a strategy needs to be based on a much enhanced level of regulatory and technical expertise and on a much higher level of trust that CDR can be a credible climate policy approach.

Oliver Geden is head of the EU/Europe research division, German Institute for International and Security Affairs. Glen Peters is research director at the Center for International Climate Research. Vivian Scott is senior researcher at the school of geosciences at the University of Edinburgh. This analysis is based on a scientific journal article recently published in Climate Policy.