Are we getting climate finance all wrong? 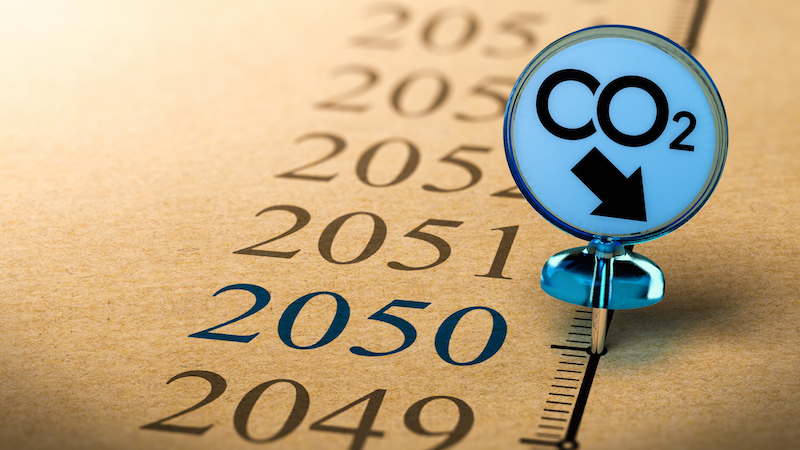 The year 2050 has emerged as a major rallying point for long term thinking on climate change (Photo: Deposit Photos)

By Jessica Brown and Ilmi Granoff

It’s widely accepted that by the year 2050, the world needs to be approaching net-zero carbon if the goals of the Paris climate deal are to survive.

This long term rallying point, laid down by experts, has been followed by political commitments from countries, cities, and businesses. But much of the thinking on financing this ambition remains stuck in the short term.

Meeting these goals will require enormous progress on energy efficiency, decarbonisation of electricity and fuels, electrification of most transport fleets, building, and industry energy needs.

It will also need massive investments in electricity generating capacity, grid infrastructure, and storage, as well as in both zero-emissions and carbon negative solutions including nuclear energy, carbon capture and storage, soil carbon sequestration, and afforestation and reforestation.

But, despite rapidly increasing clarity on the array of climate solutions needed, the investment implications of achieving midcentury decarbonisation are less understood beyond the need to “scale-up”.

Given the fundamental role finance plays in all facets of the global economy, it’s time to ask: How does a focus on 2050 change how we spend money today?

Answering this question has surprising consequences that challenge assumptions about climate finance as a tool to accelerate effective mitigation.

For example, a fundamental principle of climate economics has been to focus on the “low-hanging fruit” of emissions abatement. That is, tackling no- or lowest-cost solutions first, like certain energy efficiency interventions, with the rationale that this gives the best immediate bang for buck. This is captured in the often-referenced marginal abatement cost curves, popularised by McKinsey and Company.

In a mid-century timeframe, however, delayed investment in sectors with high emissions abatement costs, such as buildings or transport, at best delays and at worst radically increases those high costs.

This thinking is best argued by Vogt-Schlib, Meunier, and Hallegatte who make a compelling case that in many high-cost abatement sectors a late, rushed transformation will be more expensive than a progressive, slow shift towards decarbonisation. This is primarily due to “adjustment costs,” such as the costs associated with abruptly diverting the labor force to retrofit buildings, or replacing infrastructure faster than its useful life.

The researchers show another reason to start with the higher cost interventions: Often, the more expensive options not only reduce emissions today but also help lock in emissions reductions for the future. Urban transport systems are a great example of this in practice.

These points complement an earlier, independent finding that investing early in costlier technologies allows for “learning-by-doing” over time, leading to reductions in the overall cost of those technologies. Investment drives down technology costs, which in turn helps achieve more investment.

This means we need to invest immediately in technologies and sectors that are most expensive and difficult to decarbonize, even if cheaper abatement options exist.

A focus on long-term goals also requires rethinking which financial actors are best suited to invest at each stage in the technology development curve.

We’re seeing unprecedented investment in a few renewable energy technologies (on-shore wind and solar PV in particular) as scaled up investment rapidly drives down costs. But mid-century decarbonization will require continued price declines for these and many other technologies. Once we understand what technologies to prioritize, and where these are situated along the technology development curve, we need a framework for prioritizing the sources and structure of financing best suited to drive them toward price stability.

Typical models of maturing innovations tend to emphasise the role of public investment at early stages of technology development, with public efforts at later stages limited to setting the right policy conditions to attract private investment. However, research by Mariana Mazzucato and others suggests public investment can play a critical role even at later stages in the innovation chain, throughout commercialisation and deployment stages. Green investment banks, loan guarantee programmes, and other “industrial strategy” tools have helped accelerate the commercialisation of low-carbon innovations.

Moreover, other research shows that the return expectations of venture capital – which typically comes in at early stages of commercialisation – do not always match actual returns, and therefore the underlying investment needs, of clean technologies at that point in their development.

These trends buck traditional thinking on where what types of capital are best deployed, begging us to consider whether the climate finance community needs a new framework for financial actors along the technology development spectrum. 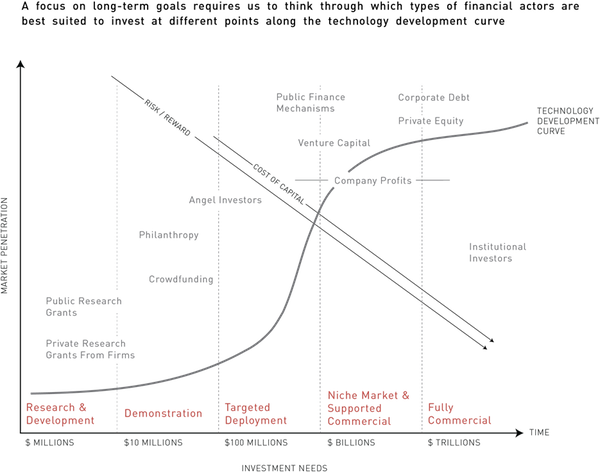 Source: Authors’ own, inspired by Mazzucato and Semieniuk, 2018

Another question that comes up as we take the long view on climate investment is how to most effectively mobilise low-carbon investment in developing countries.

The traditional approach to addressing this challenge at international political negotiations has been to scale up finance flows from developed countries to developing countries, with a focus on climate-specific overseas development assistance and other official flows.

These funding sources are important, and there is little doubt that their overall levels are too low to meet critical climate-related needs.

But why limit this argument to R&D? For instance, while US R&D spending critically drove down costs for solar PV in the late 1970s, Germany induced further cost decreases through public investment and policy support starting in the 1990s. This in turn led to Chinese state support to PV manufacturers starting in the 2000s. Taken together, these domestic investments helped fuel the solar PV industry so that today, we see many emerging economies able to choose renewable energy based on lower tariffs alone.

To be sure, financial support for developing country mitigation activities needs to scale-up under any circumstances. However, recognising these technology maturation paths will better elucidate how to support catalytic initiatives in both developed and developing countries most effectively with the aim of providing cross-border decarbonisation benefits.

New thinking might also help us better direct climate-related development assistance, helping differentiate between economies where cost-competitive technologies have been locally proven and can already scale-up through market forces, and economies where those technologies have yet to diffuse.  A dollar of development assistance in the Middle East may buy more solar power than in Southeast Asia, but the assistance may be more critical in Southeast Asia to true the regional market to the global reality of cheap renewables.

It’s with these and other questions in mind that ClimateWorks and Climate Policy Initiative have established a new research agenda -the Climate Investment Research Collaborative on Long-term Effectiveness (Circle) – to explore the role of finance in addressing longer-term decarbonisation needs. We are inviting others to join us, because, while 2050 may feel like a long time from now, as of yet, when it comes to the investment decisions needed to get us there, we may only understand the tip of the iceberg.