Why climate pariah Trump is welcome at the World Economic Forum

Comment: Far from being shunned, US president Donald Trump has been warmly welcomed at the Davos ski resort by business chiefs who benefit from his policies 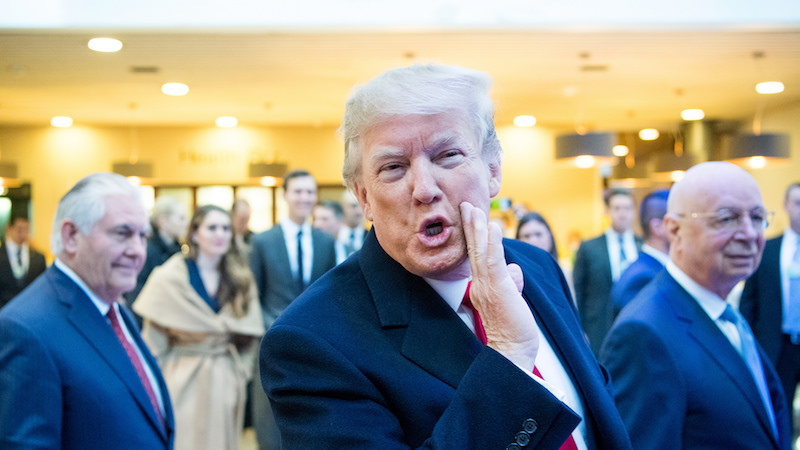 At this year’s World Economic Forum, just like every year, the conscience of capitalism has been on show.

After it dominated the forum’s annual ranking of the most pressing risks to global prosperity, climate change has been the theme of many a worthy panel.

US president Donald Trump, who rails against the Paris climate deal and the globalism that begat it, will address this conference on Friday afternoon. His attendance has been presented as an anomaly – the protectionist troll who crept under the Davos bridge. French president Emmanuel Macron joked that it was good no climate sceptics had been invited to the meeting.

Yet Trump belongs firmly among the billionaires and the powerful of Davos. As John Cassidy writes in the New Yorker: “The Trump Administration – with its tax cuts for corporations and the rich, its eagerness to strip away regulations in many sectors of the economy, and its aura of crony capitalism – is basically a plutocratic government in a populist overcoat.”

The plutocrat and the populist. The past month has shown just how dangerous that mix can be for the climate. Just as the meeting started in Davos, Trump fed his voters in the rust belt by stamping an import duty on solar panels, sparking reports of a trade war with China. Earlier in January, his administration lifted bans along the US seaboard on drilling for oil and gas, which he wants to ship to China.

Trump’s “America First” rhetoric and his promise to withdraw from the Paris Agreement are politically useful for him. But if his first year in office tells us anything, it is that Trump’s priority is regulation stripping in order to benefit US and multinational corporations.

Trump is not alone. The EU has watered down electric car legislation at the behest of carmakers. Canada’s Justin Trudeau announced in Davos that the Trans-Pacific Partnership, along with its tribunals that can challenge domestic environmental regulations, had been revived. India allows its coal plants to continue harmful levels of pollution. In Australia, where the coal lobby runs the show, the treasurer brought a lump of coal onto the floor of parliament.

The World Trade Organization (WTO), one of the institutions that protects the Davos elite, may well end up reprimanding Trump for his solar tariff. Not because it’s bad for the climate, but because it challenges the primacy of the open market.

Even the UN climate convention is subjugated to the open market and the interests of those who benefit from it.

“Measures taken to combat climate change, including unilateral ones, should not constitute a means of arbitrary or unjustifiable discrimination or a disguised restriction on international trade,” says Article 3.5.

Just 100 coal, oil and gas companies have been responsible for 71% of global emissions since 1988. Yet they continue to enjoy billions, perhaps trillions, of dollars in subsidies from governments around the world. The WTO could apply its rules to these, according to international law professor Joel Trachtman, but does not. The compact between corporations and political elites remains one of the major stumbling blocks for climate action.

Blackrock: ‘We have to change capitalism’ to beat climate change

It’s true that many in the corporate world are aware, even alarmed, about the dangers of climate change. Earlier in the week, Philipp Hildebrand, the vice-president of Blackrock, which manages around $6 trillion in assets, said capitalism needed to change in order for the world to avoid catastrophic warming.

How to do that? Perhaps the most interesting panel in Davos will take place on Friday afternoon, when Bank of England governor Mark Carney will further his highly influential discussion of climate risk disclosure. Carney believes that incorporating the threat of warming into business assessments could create a more farsighted capitalist system.

On Thursday, the chair of the $19bn Indian conglomerate Mahindra committed all of its subsidiaries to adhering to carbon cuts dictated by scientific assessment. Anand Mahindra called on others to join the science-based target club, aiming for 500 by September.

Yet capital remains dovish. Hildebrand caveated: “We have to be realistic, we also have an enterprise to run, we have shareholders, this is a complicated story. Nobody is served by reducing this to very simple, fast things that we have to do immediately.” 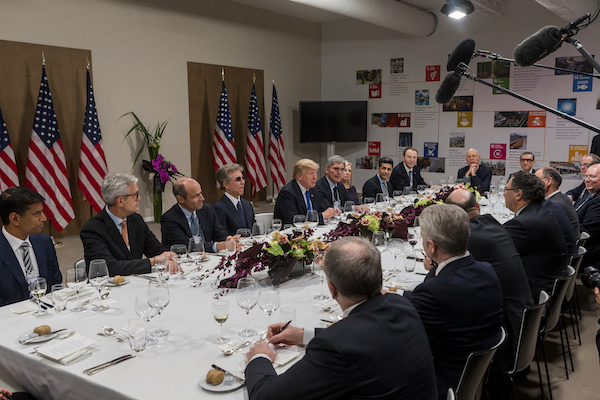 Much has been made of Trump’s “withdrawal” from the Paris deal, which is in reality just a threat to do so in 2020. But Trump has made clear that if the deal were made better for the US (in what way he has not defined) then he would be willing to rejoin.

Both Trump and the economic powers in Davos are clear that climate action is going to proceed on their terms.

On Thursday night, Trump hosted a dinner for 15 European business leaders (the only woman invited was Trump’s secretary of homeland security Kirstjen Nielson). Three of the companies whose CEOs attended – Nestlé, Statoil, Total – are in the top hundred most carbon polluting on the planet. The former CEO of Exxon, another of the top 100, Rex Tillerson, was also at the dinner, now as Trump’s secretary of state. Total and Statoil are part of the coalition of oil companies that lobbied Trump to open up US offshore drilling.

According to CNBC, the 15 executives took turns to introduce their companies and almost universally congratulated Trump on his tax reform agenda that will slash corporate taxes.

Patrick Pouyanné, the CEO of French oil company Total, tweeted later that the meeting had been “very interesting and casual. That’s what Davos is for: share ideas, exchange views, work on issues and make things go forward.” Far from being a pariah, Trump, the billionaire, has returned to his true base.