Australia’s former prime minister talks about the failure of his country’s climate policy, the rise of China and the Carmichael coal mine 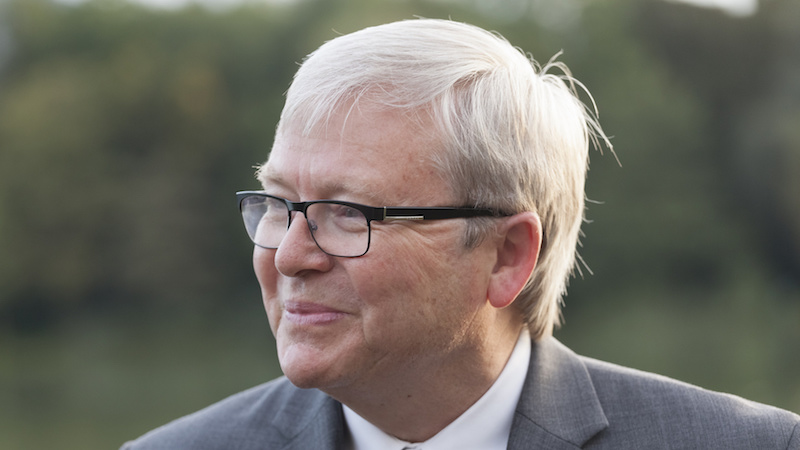 Kevin Rudd was prime minister of Australia twice, between 2007 and 2010 and for several months in the lead up to the 2013 federal election (Photo: Salzburg Global Seminar/Flickr)

It remains foremost in his thoughts and tweets. One of the “great global megatrends”, climate change will define our future as a species, he tells Climate Home News over scones, jam and tea in an Oxford hotel. But Rudd is also keen to deal with the past, where climate change also looms.

Rudd’s 2010 decision to defer an emissions trading scheme is widely seen as a high water mark for Australian climate policy. The point where the tide changed and a decade of lost opportunity began.

Rudd has blamed that decision on the cabinet forces, led by his deputy Julia Gillard, that eventually deposed him.

The current prime minister Malcolm Turnbull faces a similar revolt, led by the man from whom he took the leadership –  Tony Abbott. This has led Turnbull to retreat on climate policy, most recently ignoring the advice of his chief scientist to create a clean energy target.

Given he faces similar internecine tensions to those Rudd dealt with as PM, should Turnbull be cut some slack?

Turnbull became leader after a party room coup against the deeply conservative Abbott in 2015, says Rudd. “This guy takes over the Liberal party presumably with an agenda for government and he did so when they had a robust majority of twenty seats.”

The Australian economy was stable, the global economy was rebounding. Rudd says it should have been a platform for ambition for a Turnbull, who had previously held similar positions to Rudd on climate change.

“Turnbull at that point simply choked,” he says. “He choked on climate change, he choked on a whole range of policy measures, hence the collective disillusionment with him. Turnbull’s principle political and policy failing is that it became very clear he just wanted to be there.”

Rudd argues his government achieved significant gains on climate, including a national renewable energy target which remains Australia’s most significant carbon cutting legislation, while facing down the global financial crisis. To be judged on the deferral of a single piece of legislation is unfair, he says, especially when compared to Turnbull’s record.

In his current life as peripatetic statesman, Rudd says he takes every opportunity to criticise the Australian government over its “inertia” on climate change.

“I don’t know how those guys face their kids and grandkids in the morning. I really don’t. I just genuinely don’t,” he said.

To the climate policy failures of the Liberal-National government, Rudd suggests adding the neutering of the national broadband network he introduced while in power.

Without economic alternatives for people in rural areas, he said, there was no way Labor could oppose significant rural developments, such as the massive coal mine proposed by Indian billionaire Gautam Adani in Rudd’s home state of Queensland.

Access to high speed broadband would have been “the equivalent of the railway having arrived a hundred years before”, he says, creating opportunities for digital industries to grow beyond the cities. But the speed and ubiquity of the proposed network – the largest infrastructure investment in Australian history – was downgraded by Abbott after he was elected in 2013. Turnbull was then communications minister.

“What do these bastards do? They turn around and shoot it down,” says Rudd.

The Carmichael mine (located by the map above) has become a defining environmental issue in Australia. Both major political parties back its construction despite the prospect of it emitting 4.6 billion tonnes of carbon dioxide over its lifetime.

“You can’t just push [the Adani project] aside as a piece of good politics in the cities and marginal politics in the regions,” said Rudd. “There’s a policy reality here which shapes the politics, which is people don’t have economic opportunities anymore in this part of the world and it threatens their sense of local identity, legitimately.”

The former prime minister spoke to Climate Home News near Oxford University, UK, where he has spent the past several months researching Chinese leader Xi Jinping.

Rudd is an expert on China and head of the New York-based Asia Society Policy Institute. China’s relationship with the world is changing rapidly, he says, with important consequences for climate change.

The US withdrawal from activism on climate was seen as an opportunity within China to promote its own policy agenda. However that was being balanced against concerns over the country’s recent economic slowdown, while “at the same time being in the unfamiliar position of it being expected that they will somehow drive the pace”.

Just a day after Donald Trump announced he wanted to pull the US from the Paris Agreement, a strong statement of joint leadership between the EU and China faltered over trade disputes.

Rudd says the development of that relationship was critical but that China had been in a holding pattern for the past couple of years after unexpected economic stagnation spread caution and conservatism.

Within China, Rudd says, “there has not been a lot of progress” on environmental policy. This includes the scaling back of China’s emissions trading scheme launch, which was originally supposed to have been released across multiple sectors of the economy this year. Now, if it does emerge at all in 2017, it is likely to cover only the energy sector.

This “high degree of caution about overall economic policy direction hopefully will now resolve itself now the 19th party congress is out of the way”, says Rudd.

On the international front, Rudd says the retirement from politics of Xie Zhenhua, who was vice-chairman of China’s economic development ministry, had left a vacuum.

Rudd, who was part of a group of heads of state who crashed headlong into Chinese resistance during the Copenhagen climate talks in 2009, says at that point, Chinese foreign policy was still dominated by an aphorism developed by former leader Deng Xiaoping: “Hide your strength, bide your time, never take the lead”.

But since 2015, Rudd says, “the dictum is an activist foreign policy, with China with new capacity and a new role. But if I’m to try to predict where they will land in terms of Chinese posture [on climate change], I don’t know. That’s why the next several months will be quite critical in looking for new directions to emerge.”