In West Bengal, residents say Hurricane Harvey in the US is “no comparison” to devastation for which their country left them woefully unprepared 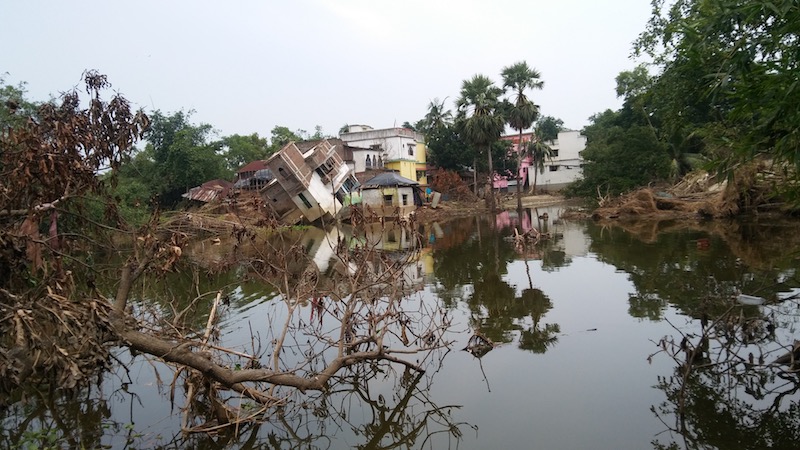 Buildings all around the village of Pratappur were swamped after flood defences failed (Photo: Aditi Roy Ghatak)

Benai village – in the boondocks of West Bengal; some 115km from the east Indian state’s capital Kolkata – was not ready for this.

In this tiny corner of a crisis that has enveloped south Asia, the heaviest monsoon in years – India’s equivalent of Hurricane Harvey – has washed out hundreds of acres of farmland, breaking every electricity pole, snapping off phone and internet links and cutting cable connections.

Between Benai and the neighbouring village of Arit, the homes of 3,000 families (for the number of people multiply each by five) have been under water since 26 July, when the bund on the Silabati River at Ghatal was breached.

The villagers had heard the grim reports of the approaching depression. Knowing the weakness of Benai’s flood defences, Tarun Bera and his friends kept a vigil through the night by the bund on the Chandreshwar Khal (canal). Some 12km away, his friends spent sleepless nights by the massive embankment at Pratappur connecting the two banks of the Silabati.

The defences didn’t hold. “You can stay awake but when the walls of water come charging in amidst thunder squall and furious winds, you can only rush to the safety of your home,” says Bera. “Only two lives were lost; one to the waters and one to snake bite.”

By the morning many homes had been uprooted, as if they were trees.

Multiply this plight by 160 – the number of villages thus affected in West Bengal – and at least three million people in this part of India are now left staring at the watery graveyards of their standing paddy crop. Rice is the staple for the region. The crop was destroyed across 12 districts of Bengal; the havoc spread over 1.2m hectares. There is nothing but water anywhere you cast your eyes.

It is the same story in Bihar, Jharkhand and Assam, states in the east and north-east of India; in the west, Gujarat was inundated, while Mumbai, India’s financial capital is still reeling, knee deep in water; a 100-year-old building collapsing in the incessant rain, killing at least 33. Across India’s eastern and northern borders, Nepal, Bangladesh and Myanmar are also in the throes of watery death and destruction. A thousand and a half are reported to have perished in the region. 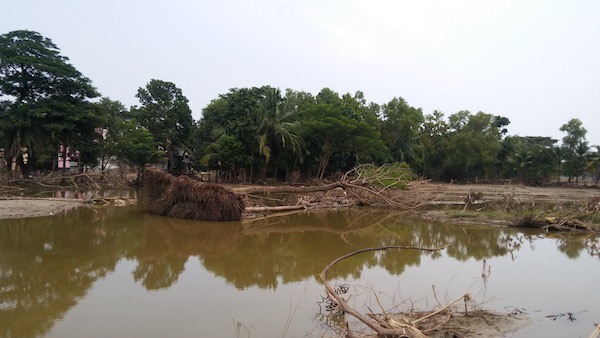 On the other side of the planet, in Texas and across the south, more communities are reeling. Scores are dead after Harvey dumped more than four feet of rain onto Houston and its surrounds.

The rainfall was actually less extreme in India, despite the catastrophically higher death toll. Comparisons are largely redundant against such overwhelming tragedy, but the discrepancy between the number of lives lost here and in the US is telling. The developing world remains profoundly exposed in the face extreme weather; extreme weather that is predicted to become ever more frequent as climate change advances. In the coincidence of these two disasters, we have the starkest articulation thus far of the UN climate science panel’s prediction that climate change will be disproportionately suffered by the poor world.

This happens for many reasons, but at its heart it is about poverty and governance. India’s National Disaster Management Authority’s budgeted expenditure in 2016-17 was $100m. In the US, a country with one quarter the population of India, the Federal Emergency Management Agency budget for 2016 was $15.5bn. In South Asia, storms regularly kill dozens of people. When a big flood comes people die in their thousands.

Standing by the Chandreswar canal near Benai, Sudipto Seth, a teacher at one of the local schools says: “There were very few rescue boats; there was no water nor water tankers; there was little evidence of disaster management teams that one hears about. Only non-government organisations came with food, medicines and other relief material.”

But the bigger problem, he says, was the “state of unpreparedness. None of the lock gates at the bunds were working and the waters had no outlet”. The Chandreswar canal had been allowed to get choked with refuse and plastic and the waters entered and just stayed on. “Only last week, we got equipment to pull the sluice gates up to let the water out,” says a cyclist, who stands by listening to our conversation. He wants to remain anonymous.

Mismanagement also played its part. The floods were pushed on by a massive release of water from the Damodar Valley Corporation’s reservoirs in the neighbouring state of Jharkhand.

We are standing by the bank of canal, next to where the bund (or embankment) was literally swallowed by the waters in broad daylight. We watch students from Seth’s school gathering around. Nearby, diminutive Subrata Pal of class IX is waiting for his friends to arrive. Boys and girls are cheerfully making their way through the slush and mire. There is no trace of trauma on their faces, despite their homes having been submerged for a month. It is the parents who worry.

Seth believes climate change “is responsible for the incessant rains that have never been so bad. In the last 10 years at least”. Prime Minister Narendra Modi has also linked this devastating monsoon to climate change – although the science is still unclear on just how much the yearly rains are being influenced by climate change. In the US, the story is the same. Harvey held more water because of the warmed planet, say climate scientists.

Has Seth heard of Hurricane Harvey? Yes, he has. So has our anonymous friend, who pipes up: “That is no comparison to the devastation we continue to face; many of us here have had a devastated existence by virtue of birth; even after the floods there is little access to relief. An outbreak of cholera is bound to follow but we are just happy to be alive”.

What comes next is a genuinely frightening thought. “Financial relief has been announced but there is no evidence of it as yet,” says Seth.

“There would have been the paddy that would have fed us for the next year,” says Rabindranath Manna wistfully. He is a farmer whom we meet beside the canal. He owns roughly an acre of land in the nearby Faridpur village. Could he save any of the crop? “Nothing; not when the fields have been under stagnant water for a month; everything has gone; even the fish is rotting.” Fortunately, he still has a source of earnings as a part-time barber, assuming anyone can afford to get a hair cut.

We encounter Asit Kumar Mandal, carrying a big bundle bunch of sticks on his head; probably the only dry firewood that he can find for his home. He is a landless farm labourer. “Most of the people you see here are not farmers; we are labourers. If we do not work, we starve. There are at least 3,000 of us here; in this area. We were marooned for days and now jobless,” he says.

The road has disappeared at this point and our car is tyre deep in bog. We are still a kilometre away from where the devastation has been gravest. Prasanta Pal, a law clerk, is passing by on a two-wheeler; he needs to fetch a certificate from his daughter’s school for her to apply for a scholarship. I ask him if I can hop on. He obliges and we head for the school along a road that no longer exists, every minute fraught with the danger of toppling over; a 30-foot drop into the Silabati river. 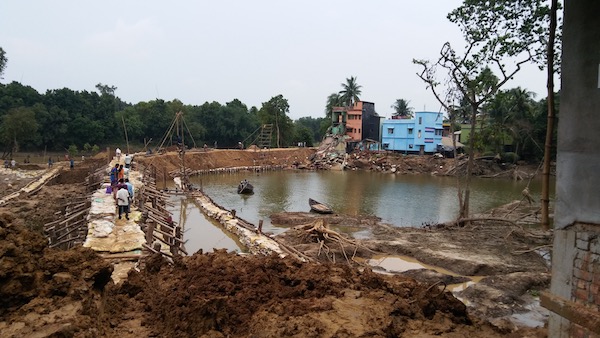 All that remains of the bund at Pratappur (Photo: Aditi Roy Ghatak)

The scene at Pratappur is gut wrenching. The top half of the huge embankment has vanished. An earth-moving machine is working furiously at the site to restore it. What it cannot restore are the many houses that have collapsed. One can see the foundations of one building, turned upside down while the house next to it is still completely submerged.

Where is the Ghatal Master Plan – a regional flood planning document – that “has been in the offing for a decade now?” wonders Arup Dhara, also a teacher.

Tarun Seth, who runs a cable network for a couple of national companies, has been working round the clock for several days now trying to restore electricity and phone connections here. “There is also relief material and medicine to distribute”.

Not a single electricity pole was spared. They lie flat on the ground in a row; their wires entangled with the roots of trees, staring out like some gigantic extraterrestrial creature with a million antennae.

Tarun’s phone rings. “Yes mother, I have had some lunch”. He is irked by phone calls from home, wondering how he is doing. He knows that he must reassure his anxious mother whom he has not seen in days, but it is a lie. He has had no time for a meal.