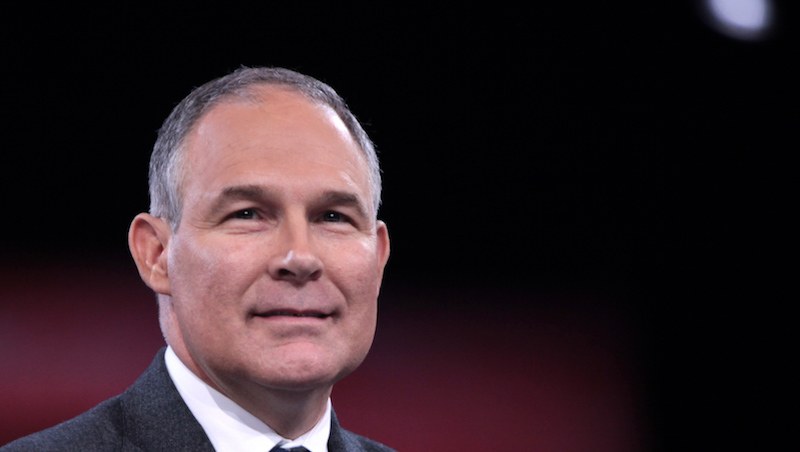 A former chief of the US Environmental Protection Agency (EPA) has offered a tepid endorsement of Donald Trump’s choice for the position.

Mike Leavitt, who was Republican governor of Utah and has advised the Trump transition on health care reform, told CNN’s David Axelrod that although Oklahoma attorney general Scott Pruitt was a controversial choice: “He seems like a bona-fide person who the president of the United States has chosen and I’d be surprised if we didn’t agree that a president deserves to have the people he appoints and then live with the consequence.

On Thursday, an Oklahoma judge ordered Pruitt to release thousands of emails to the Centre for Media and Democracy who requested them under freedom of information laws in 2015. The emails are expected to expose details of Pruitt’s contacts with the fossil fuel industry and its lobby groups.

In 2014, the New York Times found Pruitt had sent letters written by fossil fuel industry donors and copied onto his own stationary to the EPA, accusing them of overstating air pollution figures.

Pruitt’s confirmation is expected on Friday. It has been delayed by a boycott by Democrats on the senate committee overseeing his nomination.

Leavitt was administrator of the EPA between 2003 and 2005. As attorney general of Oklahoma, Pruitt repeatedly sued the agency and argued against the legality of federal cap-and-trade systems, which create a market for pollution permits. Leavitt bemoaned the politicisation of a system he said was most efficient way to tackle pollution.

“For the life of me, I don’t understand how cap and trade’s become what it has politically,” said Leavitt. “To me it’s a market-based solution.” He said that the term “cap and trade”, could be used to mask something more “compulsive”, meaning it would no longer be a market-led reform but government regulation in disguise.

“In the pure sense, where you’re using market economies to systematically drive down the amount of pollution allowed into the environment it’ll produce a better result than if you have the government deciding arbitrarily how to reduce pollutants,” he said.

Trump and his nominee Pruitt have both questioned the science of climate change. Speaking with Axelrod, Leavitt said climate change was a pressing issue that needed to be dealt with through international cooperation. However he said that in the past, other nations had acted in bad faith, undermining the process.

In the modern era of international diplomacy, he said: “The United States does keep its commitments and not everybody else does.”

Climate alarmists do not get to dictate the terms of the debate. They’ll be held accountable for their frauds… https://t.co/6eQF4yk40H

The US now appears on the verge of reneging on its climate commitments, with Trump shaping to withdraw the US from the Paris climate accord, or at least downgrade the country’s role in climate talks. Trump’s “America first” creed is generally seen to herald a less cooperative era in US foreign policy and perhaps global politics.

Leavitt said his time as EPA chief, during which he oversaw the establishment of the Global Earth Observation System of Systems (GEOSS) – a cooperative earth monitoring system that involves more than 100 nations – meant he had seen “international cooperation done well”.

“We have, as a family of nations, found a way to essentially monitor the temperature of the Earth and the weather patterns together. Now if you can create something that elaborate, you can solve these problems. But it does require a collaborative spirit, not a gaming spirit. And one of the dilemmas we’ve faced is that not everybody keeps their commitments like the Americans do,” he said.