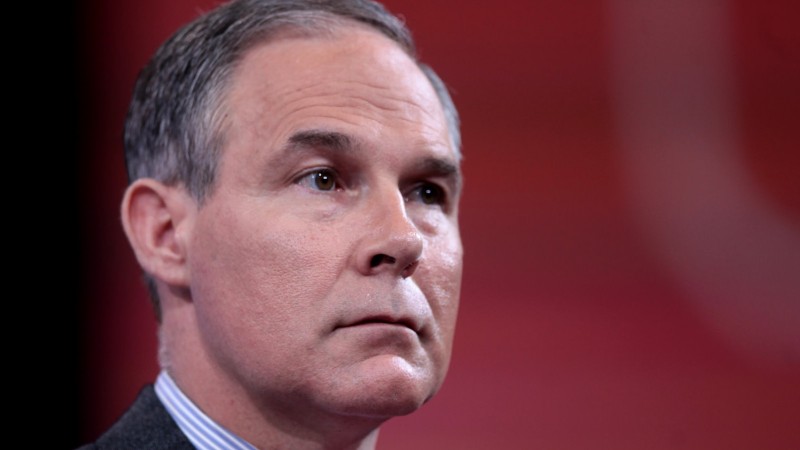 Scott Pruitt is on his way to approval as Donald Trump’s environment chief after Republican senators waved him through a committee vote on Thursday.

The controversial choice, who as Oklahoma attorney general sued the Environmental Protection Agency he is about to lead, got through despite a Democrat boycott. He is expected to pass a full senate vote next week.

Even before he takes up the position, mentions of climate cooperation have been scrubbed from the EPA website, in a clear signal of intent from the new US administration.

The following paragraph has disappeared from a page on international climate partnerships:

As a party to the United Nations Framework Convention on Climate Change, the United States is committed to working with the international community to promote the convention’s key objective: stabilizing greenhouse gas concentrations in the atmosphere at a level that prevents dangerous human-induced interference with the climate system. The United States is actively engaging with the international community to find solutions and promote global cooperation on climate change.

Elsewhere, references to initiatives launched under former president Barack Obama have been struck out, Climate Central reports, based on tracking by the Environmental Data and Governance Initiative.

At the time of writing, a section of the website explaining that carbon dioxide is the main driver of recent climate change – something members of Trump’s team have disputed – was still standing.

Early warnings by EPA insiders that Trump’s team might take down the entire climate change section have not come to pass.

Campaigners are preparing to challenge any use of the federal platform to promote inaccurate or misleading positions on the causes of global warming.

“Posting blatantly false information on the EPA’s website would violate the Information Quality Act,” Romany Webb, a climate law fellow at Columbia University, told Reuters. “The guidelines clearly state that information disseminated to the public, including via a website, must be substantively accurate.”

Whether the US will pull out of the Paris climate pact it joined under Obama remains the subject of intense speculation.

Ex-Exxon Mobil boss Rex Tillerson, confirmed as secretary of state on Thursday, told the senate America should “maintain a seat at the table” of international climate talks.

World leaders including China’s Xi Jinping have urged all parties to stick to the hard-won Paris Agreement, which was adopted by nearly 200 countries in 2015. Climate change is a priority for the next G20 summit to be hosted by Germany in July.

But avowed climate sceptic and former Trump advisor Myron Ebell is confidently predicting the president will overrule Tillerson to exit the deal.