Silent but deadly: the Trump effect on COP22

As Americans go to the polls, at Marrakech climate talks delegates are publicly confident and privately anxious

Few dare whisper the thought, but the climate talks in Marrakech lie under a pall of doubt as the US election enters its final hours.

“Whatever the citizens decide always brings the right results. This is democracy. It is the best system in the world.”

India’s environment minister Anil Madhav Dave insists that the outcome of Tuesday’s US election will not affect COP22 climate talks in Marrakech.

Dave answers the question after opening the Indian pavilion at the tent village of Bab Ighli with a speech in Hindi, that an observer says extolled Mahatma Gandhi’s approach to sustainable living.

It is hard to imagine a less Gandhi-like figure than Donald Trump, the Republican candidate for US president: a billionaire who brags of his entitlement to assault women and promises to marginalise ethnic and religious minorities. Oh, and says he would “cancel” the Paris Agreement.

Democrat Hillary Clinton, while no hunger striker, can be expected to honour US commitments to the international climate deal.

Still, as Dave says, it is America’s choice.

Some politicians have been a little less coy. France’s Segolene Royal admits her preference to see a woman in the White House. China’s Xie Zhenhua says a wise leader should “conform to global trends”.

But there is no point complaining about what you can’t change, and most delegates hold their tongues or dismiss the Trump threat – on the record, anyway.

At the daily Climate Action Network press conference, the moderator bats back a question on the election. Wait 24 hours and we’ll all have statements, she says. The friendly press officers for the US delegation say there will be no media briefings in the first week of the talks.

The accepted narrative is that the Paris Agreement is resilient, signed by 192 countries and it is in Washington’s best interests to stay with it, whoever takes the White House.

Trump’s vagueness on policy gives this some plausibility. After all, most of the time he doesn’t talk about climate change. His stance is extrapolated from a few tweets and off-the-cuff remarks. Perhaps with a few technocrats around him and some carefully applied diplomatic pressure, the backsliding would be limited.

Report: US flirts with delusion after five years of wild weather

Privately, negotiators say they can make little progress on the mountain of technical issues until they know who is going to be setting the tone for the US – the second largest emitter globally.

They recall COP6 in the Hague, where talks on rules for the Kyoto Protocol were overshadowed by a protracted tussle between Al Gore and George W Bush over the election result.

As legal disputes dragged on for a month, the summit ended in stalemate. Negotiators were called back for “COP6 Bis” the following July to tackle the unresolved issues – without the US, which under the eventually crowned president Bush pulled out.

It is legally difficult for the US to withdraw from the pact, deliberately so. But Trump need only stall progress on greening the US economy to undermine the hard-won trust of other countries.

Analysts at Lux Research estimate a two-term Trump presidency would leave emissions 16% higher than a Clinton administration. That takes the world 3.4 billion tonnes of CO2 closer to the 2C warming threshold governments agreed not to breach. 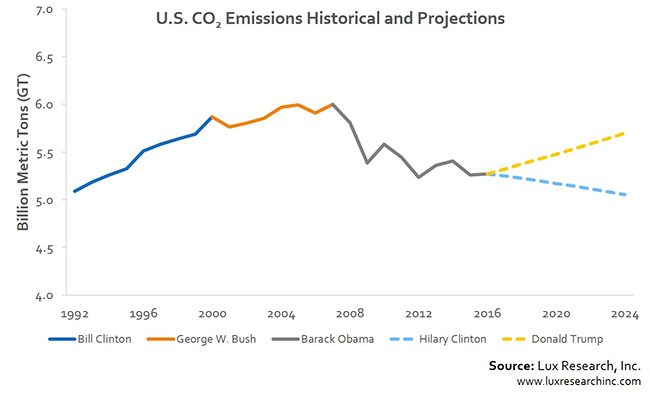 With polls open across much of the country, analysts FiveThirtyEight give Clinton a 71% chance of winning. The veteran politician has many routes to victory and need not win all the swing states.

Trump still has a substantive chance, buoyed by fans who identify with his aggressive rhetoric. Even if he loses, don’t expect him to go quietly. The underdog has pre-emptively alleged the election is rigged and refused to say he would accept the vote count.

In Marrakech, delegates will be watching avidly as the results roll in, many from the Royal Mirage Deluxe Hotel, which has been persuaded to keep the bar open all night.

On Wednesday morning, they will either be gratefully returning to the finer details of carbon accounting, or the game will have changed.