Comment: These mesmerising climate visuals tell the story of how emissions have stoked global warming since 1850 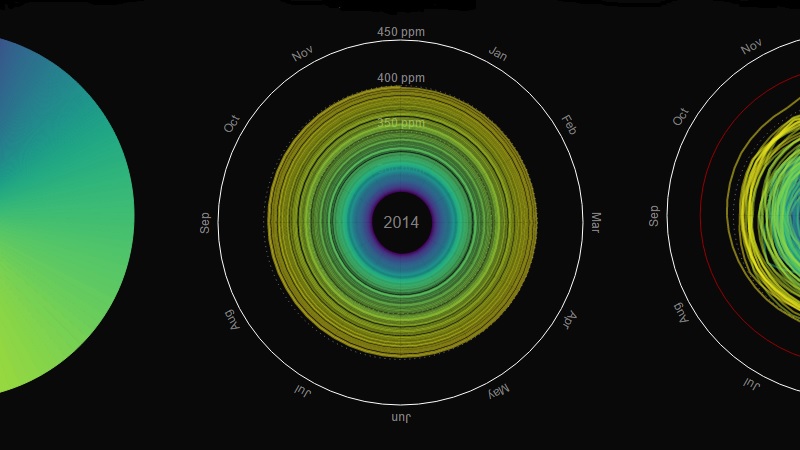 Climate scientist Ed Hawkins broke the internet in May with a gif that showed global temperatures spiralling since pre-industrial times.

On Facebook, it got 3 million views just through the page “I fucking love science”. Hawkins’ own blog Climate Lab Book temporarily crashed under the weight of hits, which totalled around 100,000.

He’s no Kim Kardashian, but as sci comms goes, this was a runaway success.

It has inspired scientists from Potsdam, Germany and Melbourne, Australia to animate the inexorable rise of carbon dioxide concentrations in the air…

…and how the growing pace of greenhouse gas emissions is eating up the carbon budget to hold global warming below 2C or 1.5C.

Put together with the temperature spiral, they paint a pretty compelling picture.

The genius of the original was to show how the long term warming trend stood out from the noise of natural variation.

Sceptics might put the recent string of 14 record hot months down to El Nino. That weather phenomenon was certainly a factor, but doesn’t explain why the previous decade was so clearly warmer than in the 1850s.

When it comes to carbon dioxide in the air, the increase is more linear, with some seasonal fluctuation as vegetation levels vary.

Finally, the carbon budget graphic joins the dots with human behaviour. It shows how smoke from factories and car exhaust pipes is building up.

In Paris last December, 195 countries agreed to try and limit temperature rise from pre-industrial levels “well below” 2C and to 1.5C if possible.

That implies a ceiling on the volume of greenhouse gases that can be pumped into the air – the “carbon budget”.

There is some uncertainty about how sensitive the climate is to emissions; the budgets shown give a two thirds chance of staying within the threshold.

It may already be too late for 1.5C, as there is a time lag between emissions and their effect on the climate – and coal plants built today have decades to run.

Still, it remains an important marker for communities on the front line of sea level rise and extreme weather.

The more we can eke out the carbon budget, the better their odds become.