Media coverage of the US reality TV star blows Planet Earth out of the water, but the number of platforms following climate change is growing finds study 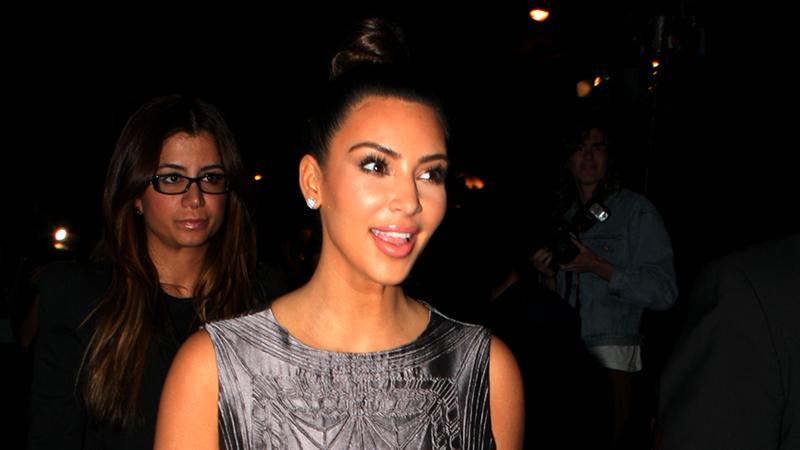 As officials from 195 governments edged closer to signing an historic pact to end the use of fossil fuels in December 2015, the rest of the world was gripped – by Kim Kardashian and Star Wars.

While Luke Skywalker and the Californian socialite were busy breaking the internet, the future of the planet gained sporadic attention from global news agencies.

These are some of the findings in a study of the Paris meeting by Martin Moore, director of the Centre for Study of Media, Communication and Power at Kings College London.

Using a series of complex algorithms, Moore’s team crunched the numbers on the two-week event, focusing on 133,000 articles from a range of publications across the British political spectrum.

One thing became obvious. For most editors, climate change is not an priority, although a surge of compelling news stories before and during the meeting was not kind on COP21’s chances of going viral. 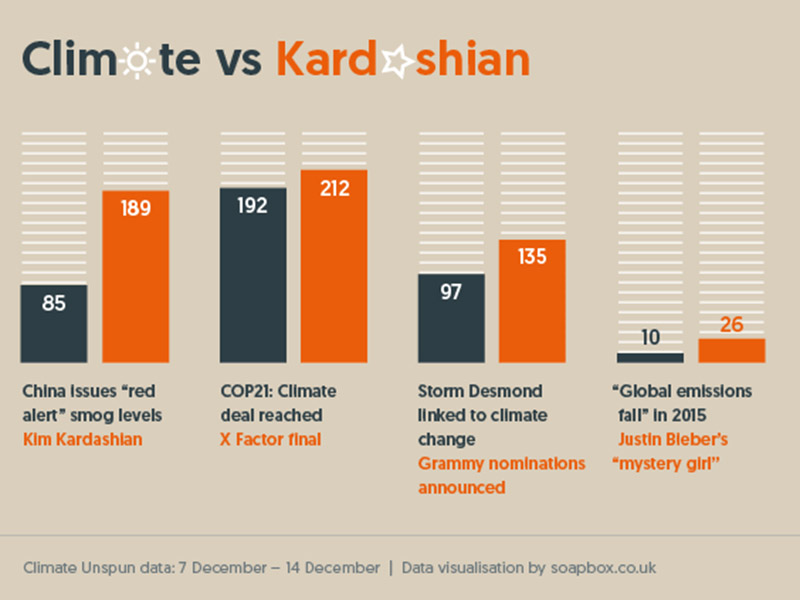 The Paris attacks two weeks earlier, Donald Trump’s mooted ban on Muslims and severe floods across Europe saw to that.

“There was a lot going on,” Moore said at an event in Oxford hosted by the Reuters Institute for the Study of Journalism (RISJ).

At the Paris summit, unlike the 2009 attempt to strike a global climate deal in Copenhagen, there was no scandal to capture the imagination.

A mass leak of climate scientist emails ahead of Copenhagen sparked a media frenzy. The talks themselves were conflict-riven, with national delegations briefing against each other.

Climategate five years on: who won the war?

Absent such drama, journalists in Paris initially focused on a “crisis” narrative, driven by the impacts of Storm Desmond across the UK and warnings over sea level rise, drought and famine from development NGOs.

In the second week of the summit, coverage slowly switched to the likelihood of an outcome but still, explicit coverage of the nuts and bolts of negotiations was thin.

“What was of particular interest was only 6% of articles referred to corporations and only 3% to industry bodies,” said Moore, offering a useful insight for business and climate strategists.

His picture is one where to a great extent governments and civil society dominated and – perhaps – controlled the narrative through persistent and effective outreach to journalists.

Also interesting is the relative lack of space offered to climate sceptics in the mainstream press, in direct contrast to previous headline UN climate summits. 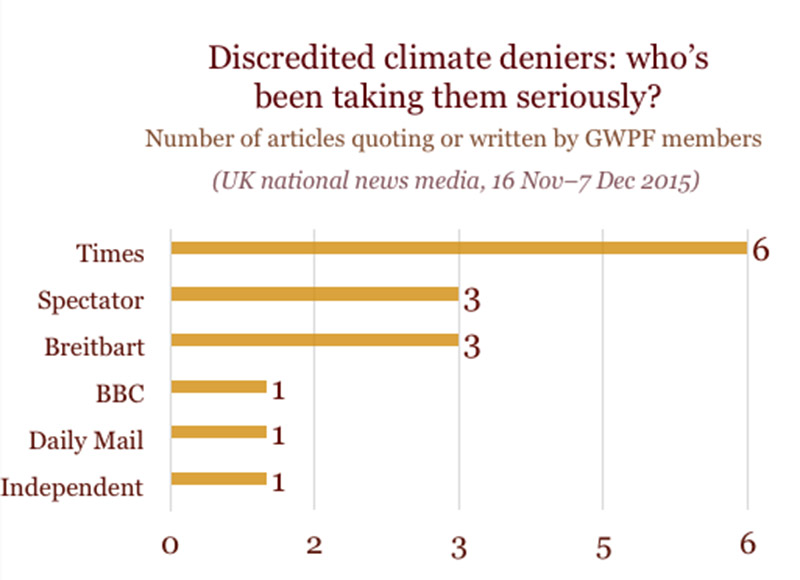 “For the most part there was a general acceptance of the science,” Moore said. A small gathering of sceptics in a Paris hotel was covered by Vice and Climate Home, but few other media attended.

In the UK, the Guardian was focused on solutions; the Daily Mail majored on climate crisis. The BBC warmly welcomed the final agreement, while the FT was openly sceptical it was sufficient.

Report: Why did Paris climate summit get less press coverage than Copenhagen?

Protests from civil society appealed to media who had embedded video and pictures at the core of their strategy. Visual stunts involving mermaids were lapped up by Buzzfeed and Vice. Campaigners take note.

But for print-heavy operations these and other organised “actions” generally failed to make much of a dent, perhaps making a paragraph in a story rather than a lead.

The study did not explore the consumption of the stories published, but given all digital newsrooms use analytics to watch the success – or failure – of articles in real time, output tells its own story.

Much as the public or campaigners may assume stories are written in the “public interest”, editors rarely commission articles that they know will not be read. 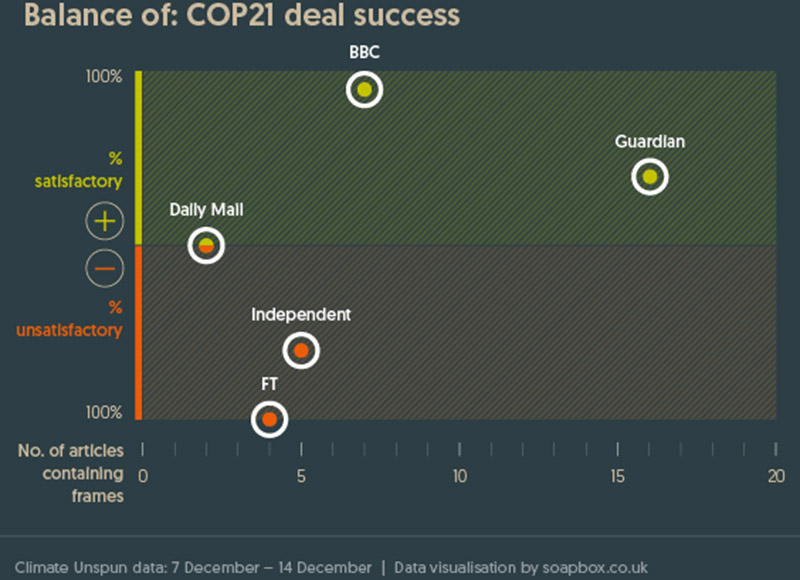 How can this inform media coverage and lobbying strategies?

Climate change is still taken seriously by leading online, print and broadcast channels, evidenced by the thousands of journalists attending the talks in Paris.

But it’s still dominated by Western outlets, with few reporters from regions likely to be substantially hit by future impacts.

News in India, China, Brazil, Russia and Africa was thin, a separate report from the RISJ due out later this year will reveal.

Except for specialist outlets like Climate Home, Climate Wire, Carbon Pulse and Carbon Brief (the clue is in the names) the intricacies of the negotiations are emphatically not front page news.

Coverage is frequently slanted towards the impacts climate policies will have on individual countries, as opposed to the wider benefits or consequences of tougher greenhouse gas cuts.

For now, most people still consume the “majority of their news from familiar and trusted brands” according to the RISJ digital news report for 2015.

Governments are already seeking to bypass journalists with orchestrated online “interviews” and announcements on twitter, while groups like Greenpeace are building their own news platforms.

Globally digital inequality persists even as platforms proliferate. There is a “widening information gap” between those online and offline, observes BBC News director James Harding in the same report.

That points to a need for outlets covering climate change to ensure they can penetrate audiences without regular internet or mobile access. It’s often these communities in Africa and Asia that need the information most.

There are, Harding added, “uneven patterns in the fewer stories that seem to get even bigger audiences and the many more that do not”.

It seems keeping up with the Kardashians is likely to be a challenge for some time to come, even for global warming.

Aspire to inspire before u expire