The European Commission has published a proposal to nudge national leaders into action, but the timeline for completing the formalities remains unclear

The Brussels bureaucracy made its first step towards ratifying the Paris climate agreement on Friday.

In a nudge to national governments, the European Commission published a draft motion for the Council of leaders to consider.

With the US and China promising to join the pact in 2016 and India not far behind, the pressure is on for the EU to keep up.

Climate commissioner Miguel Arias Canete said: “After Paris, the EU is doing its homework.  We are determined to maintain the momentum and spirit of Paris and ensure the early ratification – and the swift implementation – of this historic agreement.

“Today’s proposal demonstrates our continued commitment to lead the global clean energy transition and build a modern, sustainable and more climate-friendly economy. I am confident that the European Parliament, Council and member states will complete the respective ratification procedures promptly.“

No timeline has been agreed, however. Lawyers are still debating whether the EU can ratify before each member state has its laws in place.

France and Hungary have completed their parliamentary processes. Brussels sources say others including Sweden, Portugal and Austria are prepared to do the same this year.

Bulgaria, Czechia and Croatia are among those unwilling to formally endorse the deal before the bloc’s 2030 carbon target has been divided up. That process kicks off next month and is due to be finalised in late 2017.

The UK’s plans are on hold until 23 June, when voters decide whether to leave the EU. 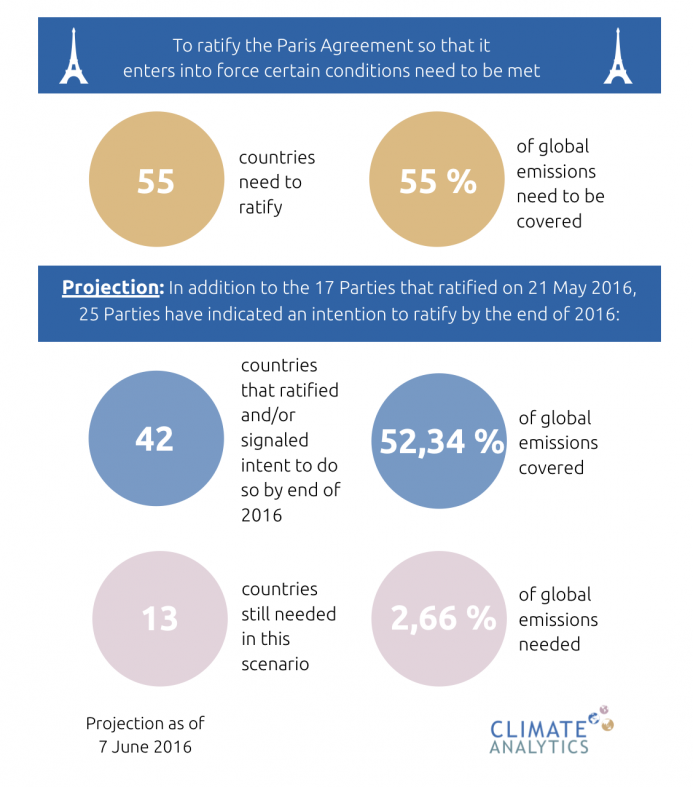 The Paris Agreement comes into force when 55 countries representing 55% of global greenhouse gas emissions deposit their instruments of ratification with the UN. Researchers at Climate Analytics say 42 governments responsible for 52% of emissions are promising to do so in 2016, bringing the threshold close.

India’s prime minister Narendra Modi affirmed a desire to seal the deal “as early as possible” in a visit to the White House this week, potentially adding 4%.

While there is no question the EU intends to back the deal it helped negotiate, tardiness will be frowned upon by international allies. It faces the prospect of not being fully signed up by the time the Agreement takes effect.