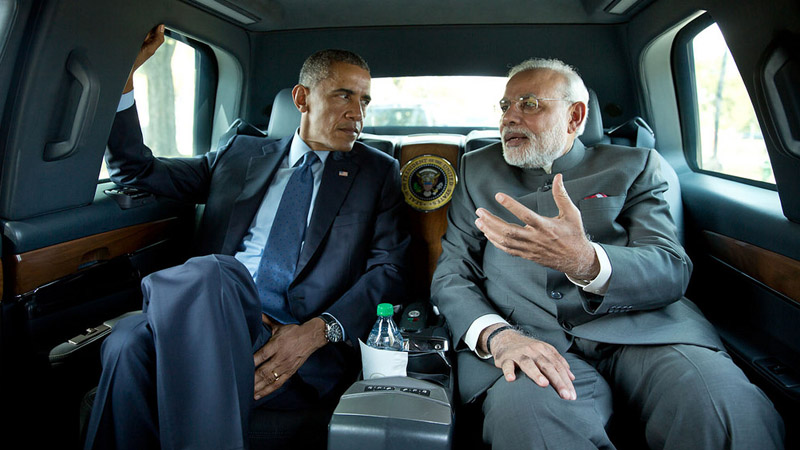 The US and India have signalled they are on course to formally approve the Paris climate agreement this year, boosting hopes it could come into force by 2017.

Meetings between US president Barack Obama and India prime minister Narendra Modi concluded with a statement to join the pact “as soon as possible”.

Obama senior advisor Brian Deese told reporters “we are in a better position than we ever have been” to meet the baseline of 55 countries covering 55% of global emissions to ratify the deal.

“This statement should provide significant momentum towards this global push,” he said.

The New York Times suggests alarm at the prospect of Donald Trump taking the White House has encouraged Indian officials to ratify the UN deal by the end of the year.

Deese highlighted what he termed a “path to success” between the US and India on cutting HFCs, a potent warming gas used in refrigeration and air conditioning.

The UN hopes to secure agreement under the Montreal Protocol to curb the use of HFCs and other high impact gases, which scientists say would otherwise be responsible for 0.5C of warming.

The deal in brief:
-Aim to ratify Paris climate deal by end of 2016
-Start work on 2050 low emission plans
-US/India to jointly invest $440m in renewables
-Agree to seal HFC/aviation emission pacts in 2016
-Westinghouse to build 6 nuclear reactors in India

Under the US-India agreement, developed countries will increase their financial support in return for developing countries to agree an “ambitious phasedown schedule”.

“Today’s announcement signals that the U.S. and India are overcoming the few remaining differences between them. India’s support for the Montreal Protocol may well be the tipping point that leads the world to curb these fast-growing, potent greenhouse gases,” said Andrew Steer, president of the World Resources Institute.

India’s burgeoning clean energy sector could also benefit from US$440 million of investment under two new initiatives aimed at providing one million households with power by 2020.

Liz Gallagher, an associate at the London-based think tank E3G, highlighted the focus on renewables as a solution to India’s vast energy demand, a significant shift in tone for the Modi government.

“Renewables are now considered as the key to meeting demand – that’s a change in mindset,” she said.

US company Westinghouse is primed to build six reactors in India, although finer details including financial package had yet to be agreed, said a White House official.

Read more on: India | US India