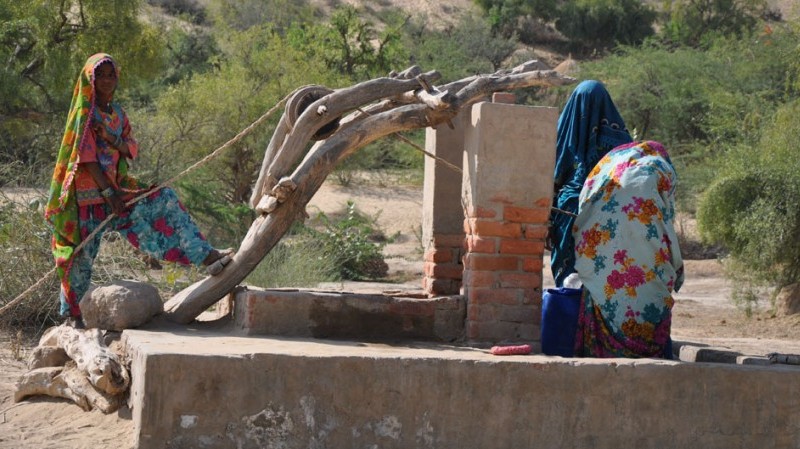 Women fill their earthen pots with water from a well in drought-hit district of Tharparkar (Photo: Saleem Shaikh)

By Saleem Shaikh in Islamabad

Pakistan is rolling out measures to tackle a looming water crisis caused by depleting natural water resources and wastefulness, which is turning much of its land arid.

In December 2013, the World Resources Institute ranked Pakistan among the 36 most water-stressed countries in the world. Global warming and population growth are increasing the strain.

Framed by the federal water and power ministry last month, the policy promotes water-efficient technologies and conservation irrigation methods to enhance farm productivity in the country of 191 million people.

The country’s agriculture sector gulps around 96% of around 170 billion cubic metres of freshwater resources annually. It is the main focus of the water conservation measures proposed in the policy.

The minister described climate change as a major threat to the country’s water security.

A report by the Planning Commission of Pakistan, based on data from the Water and Power Development Authority of Pakistan, indicates in 1951 per capita water availability was 5,650 cubic metres.

According to Pakistan Water Gateway, a non-governmental water-research portal, groundwater levels in the country are dropping by a metre a year.

“If groundwater depletion continues at its current rate, the country is surely headed for widespread water poverty in next few years,” Muhammad Arshad Khan Laghari, lawmaker and chair of a parliamentary committee on water and power, told Climate Home. 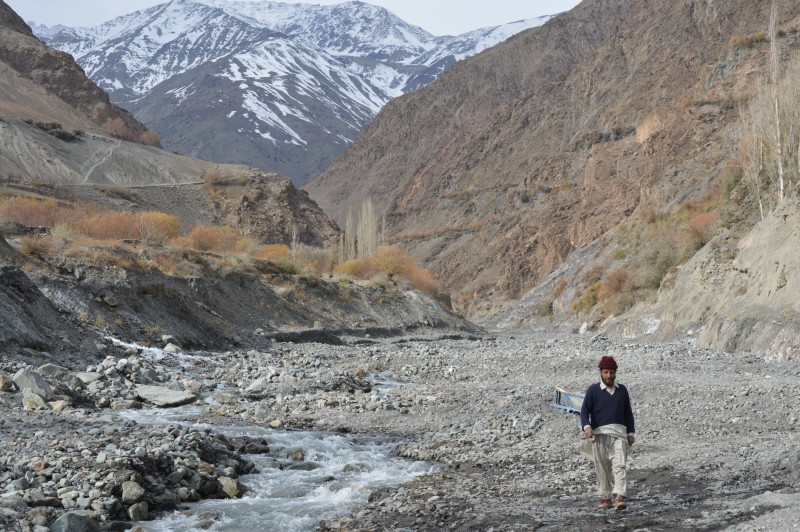 A man walks along a glacial water stream below a snow-covered mountain in Gulkin valley in northern Chitral district of Pakistan (Photo: Saleem Shaikh)

Spreading urbanisation in Pakistan also means more pavement and less chance for water to percolate into the ground, warned Daanish Mustafa, professor of water-resources geography and environmental management at King’s College London, in a 2013 report.

The situation calls for rainwater harvesting as emphasized in the water policy to recharge the groundwater resources, said Pervaiz Amir, water-policy expert and country director of the Pakistan Water Partnership, a chapter of the Geneva-based Global Water Partnership.

He recommends building reservoirs in villages, towns and near cities to make up for lost groundwater.

Nearly 70% of Pakistan’s 291 millimetres of annual rainwater gets wasted because of poor storage facilities and accumulation of silt in the country’s water reservoirs, said Qamar uz Zaman Choudhary, former director-general of the Pakistan Meteorological Department.

“Planning for water resources development and management should be at the heart of the policy and be done in co-ordination with the cross-sector policies and projects such as agriculture, irrigation and industry sectors,” he suggested.

Federal Planning and Development Minister, Ahsan Iqbal, says the country requires a minimum storage capacity of 40% of the water available in the Indus river system throughout the year. But the country’s storage capacity is only 7% and decreasing due to sediment build-up in reservoirs.

This gives Pakistan a stored water supply to meet its needs for just 30 days.

“In Pakistan, planners and policy makers across different sectors, including agriculture and industry, energy and health now have … a daunting challenge before them of increasing the country’s water storage capacity,” Iqbal said.

Equally important are water-saving farming practices and less thirsty crop varieties, he said. “Techniques like drip irrigation that allows water to trickle slowly to plant roots; sprinkler irrigation that sprays water on crops instead of flooding the fields, and pitcher irrigation in arid and semi-arid areas whereby farmers bury clay water pitchers underground that allow water to seep out according to soil dryness should be seen as vital part of policy measure for water conservation.”