State wins seat at negotiating table after six years on periphery, bringing number of parties to 197 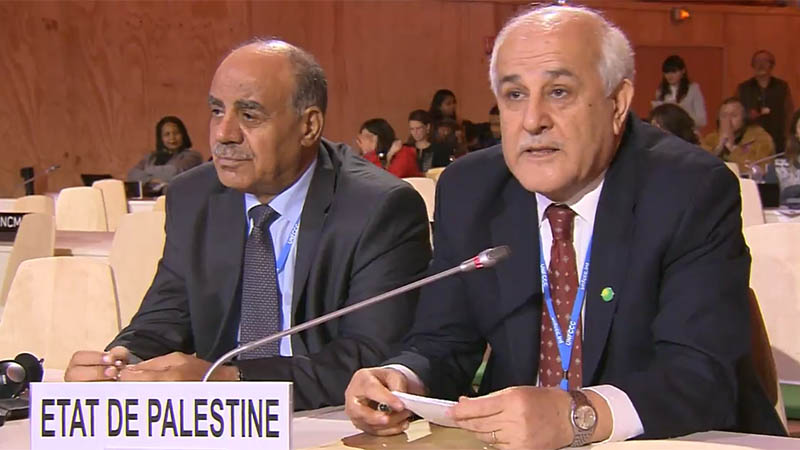 Palestine will become the UN climate forum’s newest member in 2016 as it builds a greater stake in global institutions.

The state will be upgraded from ‘observer’ to ‘party’ status by March, having submitted accession papers as countries signed a momentous pact in Paris.

“The State of Palestine is strengthening its pillars in the international arena,” ambassador Riyad Mansour told the debating chamber on 12 December. “We are so proud of this moment.”

Previously, Palestinian envoys have been limited to expressing their positions through colleagues in the Arab Group and G77 bloc, or speaking only after the full parties have had their say.

In future, Mansour said, “we will speak when we select to speak,” as he delivered the message on behalf of President Mahmoud Abbas.

The territory was invited to join the Bonn-based UN framework convention on climate change (UNFCCC) in July 2014, following the UN’s recognition of Palestinian statehood in 2012. It first participated in talks as an ‘observer entity’ at the Copenhagen climate summit in 2009.

The decision was politically charged, with Israel and the United States among several countries resisting increased international recognition of the territory.

When Palestine joined UNESCO in 2011, it triggered a law prompting the US Congress to suspend funding for the Paris-based body, which accounted for a fifth of its budget. UNESCO retaliated by withdrawing US voting rights.

It is unclear if Palestine’s full membership of the UNFCCC would prompt a similar outcome. US experts approached by Climate Home appeared uncertain.

In December’s omnibus bill, the White House released up to US$10 million in funds for the UN climate body and science panel, the Intergovernmental Panel on Climate Change.

The US reportedly provides over $400 million a year in aid to the Palestinian Authority. That funding will be cut if it seeks full membership of the UN or takes legal action against Israel in the International Criminal Court, which it is set to join in April.

As of September, 136 of the 193 member states of the UN reportedly recognised Palestine.

Report: Thirst for water a sinking point at Israel-Palestine talks

“As a Party we will have equal footing with all other countries,” government climate change advisor Nedal Katbeh-Bader told Climate Home by email on Monday.

The arid territory is vulnerable to a warming climate. Droughts threaten limited water stocks and rising sea levels could damage the enclave of Gaza.

The Holy See remains an observer to the UN process, while Taiwan is entirely excluded as China blocks its membership.

“We will continue to act as a very responsible state as we move forward in our struggle to put an end to Israeli occupation to our land … seeking independence of our state to save the two-state solution,” Mansour added.