Pretty green: The youth clamouring for a climate deal

They’re unruly, idealistic and shout loudest for justice. But are they being heard? We met five twentysomethings at COP21 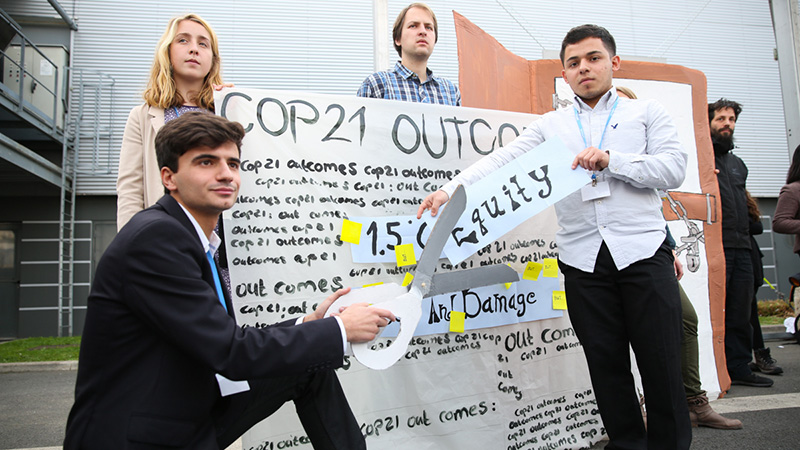 Members of civil society show their dissatisfaction at key issues being cut from a draft text that is to become a global treaty this week (credit: IISD/Kiara Worth)

With their spontaneous protests or ‘actions’, they add a splash of colour to monochrome UN talks.

Thousands of young people have come to the French capital for the event known in the lingo as COP21 (me too – I am 24).

Banned marches and rationed passes threw a curveball. But young people are determined the squeezed space for expression won’t muffle their message.

YOUNGO – a portmanteau of ‘young’ and ‘NGO’ – is the umbrella under which all groups gather and which gets a seat in the main debating chamber alongside 195 nations and the likes of the World Bank.

That supposedly gives them access to top figures, including France’s foreign minister herding countries to a deal, Laurent Fabius. They can also submit proposals to a new climate agreement.

Yet it’s the raucous demonstrations on the tent city’s main avenue where they appear to have more impact. 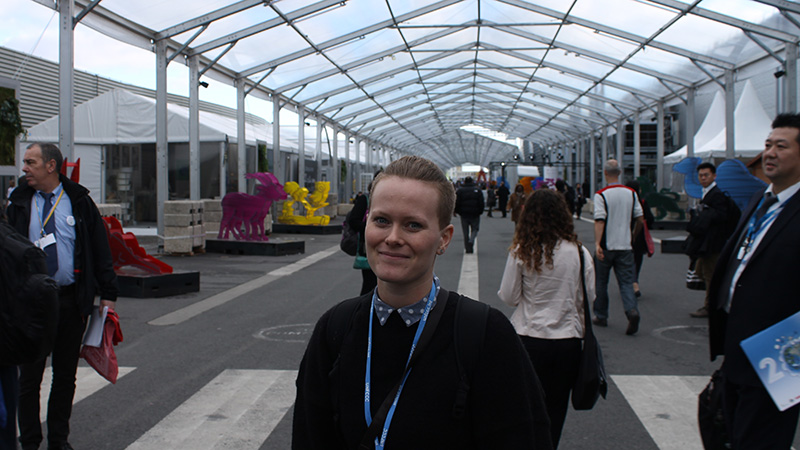 Kirsten Finch from Norway is part of a 200-strong YMCA troupe. A church minister, she’s one of just a dozen that gained a pass for the two-week climate extravaganza.

“We’re from all over the world and we can go into delegation meetings with almost every country,” the 27-year old says, on the sidelines of a limbo contest with the height determined by a thermometer running from 0 to 7C. “YOUNGO is organised in a way that influences people.”

How low can you go? 1.5C is the challenge – a threshold countries vulnerable to climate change impacts are demanding from a Paris deal. Germany, Australia and Canada have backed toughening the target from 2C, although scientists say it is a tall order to cut emissions fast enough. 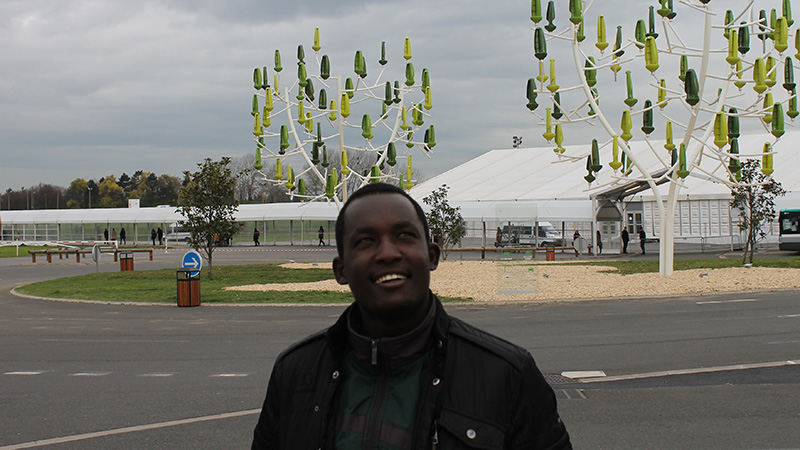 Ekai Nabenyo won’t be taking part in those gatherings, he tells me amongst a sea of pillars from country flags outside the main venue. He couldn’t get accreditation, but it hasn’t fazed him.

“I have not lost much,” he beams on what is his first visit outside of Africa.

The 23-year old law graduate has succeeded in telling the tale of his cherished Turkana, a region in northern Kenya where pastoralists are feeling the impacts of global warming.

“Growing up in my village as a herdsboy, I used to see the see the green and beautiful Turkana environment. It’s becoming increasingly arid, water levels are reducing, and animals are dying.”

Discussions with peers who are part of delegations within the public Climate Generations Area, half a kilometre away from the main venue, boost chances of a deal that protect the poor, he says. 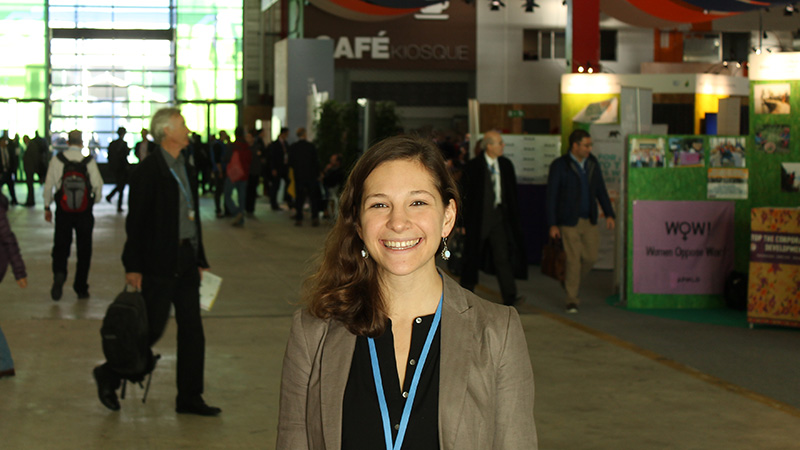 Erica Bower of group SustainUS is tracking future claims by climate victims for compensation from emitters as the planet overheats.

Displacement of populations is a present threat in sub-Saharan Africa and low-lying island nations, says the 23-year-old New Yorker, who is studying for a masters at Oxford University.

“Youth occupy a unique niche in this space, in that we are able to say things and do actions that other parties with government or UN agencies attached to their names don’t feel like doing,” she adds.

Recognition of “loss and damage” is in that category – “it just needs a hook” this time in Paris, then finer details can be decided at future summits, Bower says. 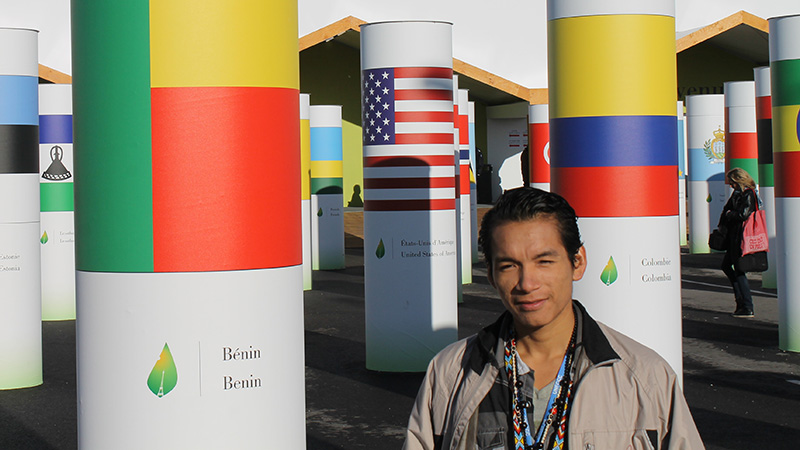 Luis Canelos has travelled from Ecuador’s Amazon out of solidarity with other civil society groups, he says.

The 28-year-old fights against illicit loggers and the spread of agriculture slashing down pristine rainforest in his Kichwa community. Expanding mines are another worry.

“We have a more real awareness of things than people from other places. They don’t suffer the problems like we have done,” he tells me, another person unable to gain accreditation.

He hopes to grasp what the officialese peppered in a new global warming accord means for his Kichwa community.

“Development is important but not so necessary as to sacrifice the Amazon.” 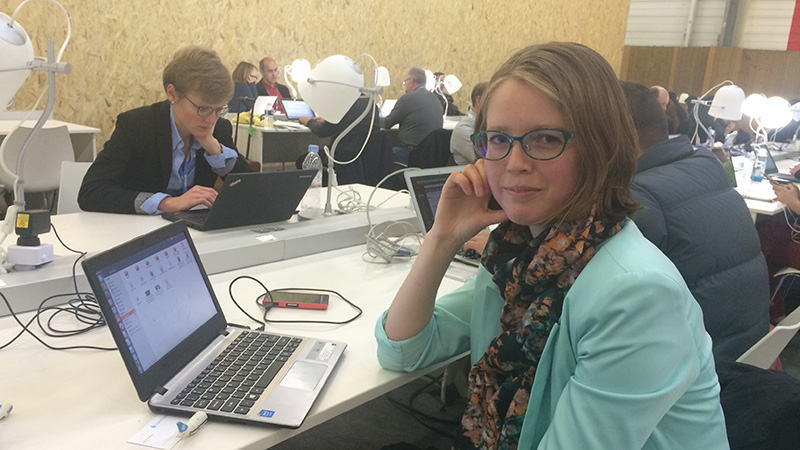 Intergenerational equity or “Inteq”, as the 22-year-old from Wellington calls it, is her focus.

“If I asked you would you want to leave a better world for your children, everyone says yes. But a growth economy and climate change especially do not allow for that.”

COPs are great for exposure and gaining new skills, but it’s this where young people can reach out to delegates.

“We are the ones that will be living in the world that is agreed on now. Future generations don’t have a voice.”

All portraits by Alex Pashley