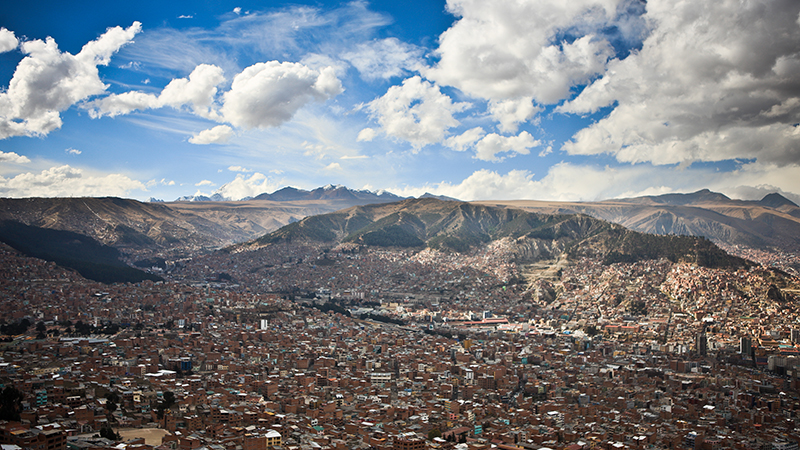 Bolivia swore not to be the Global North’s “forest warden” on Sunday as it fiercely defended its right to development in a new world order of constrained emissions.

The socialist country revealed its contribution to a UN pact during a grassroots summit on climate change and Mother Earth, buoyed by the visit of UN head Ban Ki-moon.

In its plan were ten “structural solutions to the climate crisis”, which included banishing capitalism, establishing a global environment court and diverting military spending of “imperial powers” to climate finance.

Unlike many developing countries, the landlocked nation ruled by President Evo Morales declined to set an economy-wide target for curbing greenhouse gas emissions.

Instead, the country said it would halt illegal tree-cutting within five years and double renewable energy’s share of power generation to 79% by 2030.

“Bolivia considers that it must carry out fair and ambitious efforts to tackle the impacts of climate change, despite the fact it hasn’t caused the phenomenon of global warming,” the pledge read.

Pablo Solon, the country’s former climate negotiator, pointed out there was no commitment to tackle legal deforestation, however.

Nearly 60% of Bolivia’s emissions come from land use, as companies clear rainforest for soy plantations or oil exploration.

Bolivia, which has codified a respect for Mother Earth in the constitution, has been accused of hypocrisy, having passed a raft of decrees to drill in national parks that are home to indigenous communities.

While US dataset CAIT pegs Bolivia’s emissions at 0.2% of the global total, that rises to 1.2% when forest fires are factored in, as recorded by EU’s EDGAR.

“We aren’t going to be forest wardens of the capitalist countries,” President Morales said on Sunday, defending the trend as part of efforts to eradicate extreme poverty by 2025.

Critics from the global north were accused of “biased colonial visions” in the document, which reiterated that industrialised countries had a historic responsibility for climate change.

#UNSG Ban Ki-moon with Pres. Evo Morales of #Bolivia upon arrival in #Cochabamba for the Peoples World Conference. pic.twitter.com/1C43bSw31c

Almost 200 countries are expected to sign a climate pact in Paris in December, aimed at holding global temperature rise to 2C. Bolivia is late to the game – the 150th party to submit its pledge, after missing the UN’s 1 October deadline.

Ban welcomed its contribution to the debate, saying: “There is much to be learnt from indigenous peoples as we seek to find solutions to the challenges of combatting climate change and managing Mother Earth’s resources in a sustainable way.”

The conference will conclude in a declaration on Monday, aimed at influencing countries’ crafting a new climate agreement.