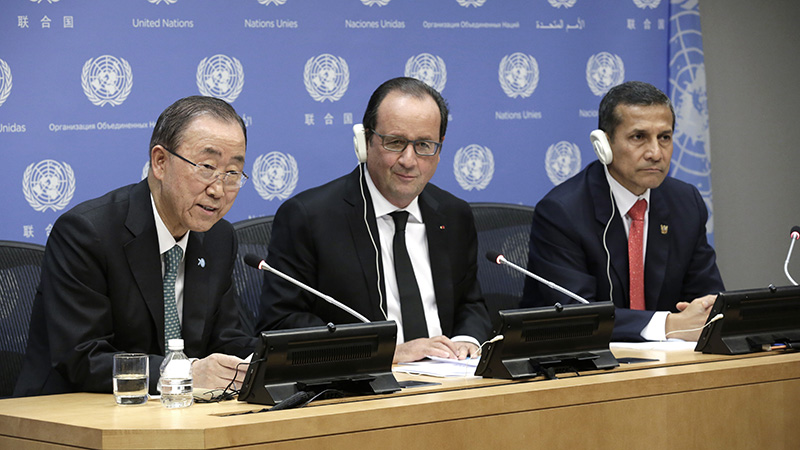 Support is building behind the radical concept of global decarbonisation.

Severing the link between fossil fuels and economic development is the contentious next step in holding warming to the agreed limit of 2C.

A broad coalition of countries moved to translate that goal into action at an informal meeting on the sidelines of the UN general assembly in New York on Sunday.

Thirty heads of state including Chinese president Xi Jinping, his German counterpart Angela Merkel and Brazilian premier Dilma Rousseff, reaffirmed the 2C temperature threshold must be the objective of a Paris climate summit in December.

At a working lunch headed by UN chief Ban Ki-moon, and France and Peru’s presidents, they proposed ways to convert that into more tangible targets.

“The progressive decarbonisation of the global economy over the course of the century, or the shift towards 100% clean energy systems, or green low carbon transition during the course of this century,” were the three options set out in a statement.

In June, the G7 declared support for a net zero carbon goal, driven by the European Union and summit host Merkel. The German chancellor scored similar consensus on a visit with Brazil’s Rousseff in August.

“The consensus emerging on expectations for Paris as building an enduring regime to keep us on track for 2C, echoes the EU’s own decision a few weeks back,” she said.

There was also agreement on a need to increase ambition over time, with “many” supporting progress reviews every five years. And leaders emphasised Paris must set out how a promised US$100 billion a year by 2020 of climate finance will flow from rich to poor countries.

It remains to be seen how the high-level discussion will feed into the text of a Paris deal, still the subject of fierce technical negotiations.

The summary of the meeting stressed the goal was to “reach a shared political understanding” and not substitute for UN climate talks.

Despite national pledges to cut greenhouse gas emissions up to 2030, the planet is on course for levels of warming deemed dangerous.

To stay within atmospheric capacities for carbon dioxide pollution, emissions have to fall to net zero in the next half of the century, scientists say.

Yet countries continue to rely on fossil fuels for most of their energy, which pump out warming gases.

Energy generated from coal, oil or gas accounted for 85% of primary consumption in 2014, according to BP’s statistical review. Renewable energy excluding hydropower still represents a small fraction at an estimated 6%.

Jennifer Morgan at the US-based World Resources Institute was upbeat about the progress made in New York.

“After years of pushing, we are approaching a real turning point on global climate action,” she said. “Change is in the air.”