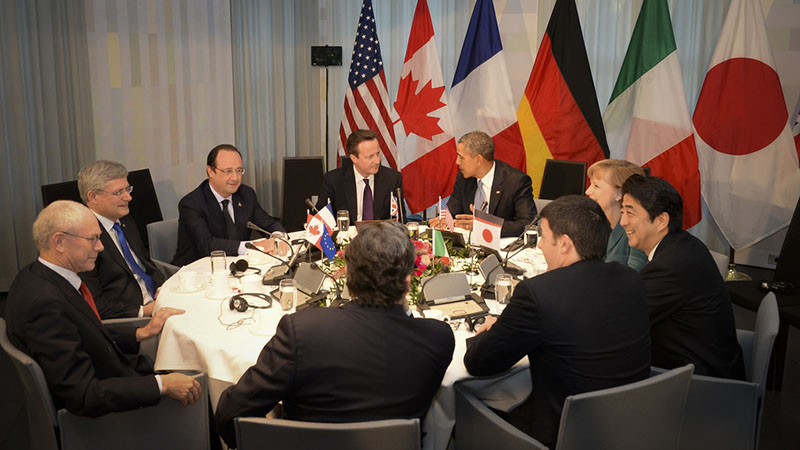 CLIMATE CASH: Ministers from 18 countries who in 2009 promised to deliver $100 billion a year in climate funds by 2020 met on Sunday in Paris to discuss how they would find the cash and what type of finances would count.

In a two page statement they said all were committed to hitting the target, and offered a brief definition of “our common understanding of mobilised climate finance”. Funds they say count include loans, export credit agency finance, development finance and de-risking finance instruments. Here’s the full statement.

PARIS MINISTERIAL: That announcement was part of a wider two-day [Sunday + Monday] gathering of senior officials and ministers to discuss plans for a UN climate deal – hosted by the French government. An agenda seen by RTCC suggests key discussion topics will be finance, technology transfers and capacity building together with adaptation and loss and damages from climate change.

Plus lots of buffet lunches and aperitifs. Here’s the family photo:

COP21 PROGRESS: So said Ahmed Djoghlaf of Algeria, one of the two co-chairs of negotiations on a global deal. Despite many observers at last week’s talks in Bonn telling RTCC they were moving too slowly, Djoghlaf told reporters he was happy with their speed.

On Friday his team won a mandate from the 195 countries taking part to produce the first comprehensive draft of the new, universal climate change agreement that governments are committed to reach in Paris, in December.

“At this session, countries have crystalized their positions and have requested the Co-Chairs to produce a concise basis for negotiations with clear options for the next negotiating session in October. This means that we will arrive in Paris on time without too much turbulence– not before, not later,” he said. Here’s our wrap up report plus an interview with UN climate chief Christiana Figures.

THE ELDERS: Evidently don’t agree with Djoghlaf’s analysis. The group of veteran leaders, who include Kofi Annan, Jimmy Carter and Nelson Mandela’s widow Graca Michel, have written to heads of state calling on them to use the upcoming UN General Assembly to push talks in COP21 forward.

Specifically they want them to “commit now to the inclusion in the Paris agreement of mechanisms that will assess collective progress and ratchet up the commitment of all countries on mitigation and adaptation every five years. Mutual support and transparency to ensure our collective future wellbeing is the most effective – and morally just – way to proceed.”

PODCAST: Episode 2 of the Emissions Factor will be live later today. I was joined in Bonn by the FT’s environment correspondent Pilita Clark and Michael Jacobs, climate advisor to former UK PM Gordon Brown. Follow us on Soundcloud here.

BURNING QUESTION: Alaska’s forests this summer have taken a pasting. The previous 15 years have seen an increase in fire frequency, says Kent Slaughter, director of the Alaska Fire Service.

Before and after pics show the giant scars from this year’s Alaska fires, which spewed giant amounts of co2 pic.twitter.com/hQSm58CUOe — Bill McKibben (@billmckibben) September 6, 2015

BIZ INTEREST: CEOs are alert to the threats of climate change but have mixed views on what to do, says Jonathan Grant, sustainability director at PwC. He writes: “With less than 100 days to go before the UN climate summit in Paris (COP21), our latest survey of CEO views on climate show that only 46% see the deal as the main driver for action in their sector.  Public awareness and national policy was considered much more important driver, suggesting that many CEOs struggle to make the connection between the negotiations and their day-to-day business.”

CONOCOPHILLIPS: The Houston-based oil and gas giant is apparently supportive of plans to develop a global climate deal. According to the Carbon Disclosure Project (CDP) it, along with Russia’s Gazprom, said it backed plans to limit global emissions in a recent survey. Reuters has more.

EMISSIONS COUNTING: Plenty of differing views on how much of global emissions have been covered by UN action plans submitted by countries so far (57 nations according to our tracker). The UN reckons it’s nearer to 70%, but the team at Climate Action Tracker have emailed us to say it’s actually 64.5%. Here’s their maths. Either way, the level of proposed cuts are nowhere near enough to avoid the 2C danger zone, making this bald man and comb territory.

It’s another big more for the popular official, known for her straight talking, and one welcomed by current boss Jim Kim: “Access to clean sustainable energy for all, especially in Sub-Saharan Africa, lies at the heart of all countries’ interests, as low-income countries cannot develop without energy,” he said. “People cannot have equal opportunities without energy – that’s why this initiative is so central to achieving the goals of ending extreme poverty by 2030 and boosting shared prosperity.”

SARAH PALIN: Two words that strike fear into US climate hawks. And if Donald Trump gets elected as POTUS in 2016 she could do some damage, as she wants to take control of the US energy department. “Oil, gas, minerals, those things God has dumped on this part of the earth for mankind’s use instead of us relying on unfriendly foreign nations for us to import their resources,” she said, adding that once in charge she would get rid of the department.

PACIFIC STORMS: There’s a big one brewing and likely to smash Australian and NZ diplomats at the Pacific Islands Leader’s Forum this week in Port Moresby, Papua New Guinea.

According to the Guardian, Tony Abbott and John Key are likely to be in for sustained criticism from small island states over their weak carbon cutting objectives. Fiji’s PM Frank Bainimarama, who’s boycotting the meet in protest says Tony Abbott should ditch what he calls the “coalition of the selfish”

EMMA THOMPSON: Finally, a warning to all climate campaigners. By all means get out there but do your homework first. Last week actress Emma Thompson was on the BBC outside Shell’s UK HQ warning that warming could hit 4C by 2030 if more was not down to limit the use of fossil fuels.

That was hogwash, said one of the UK’s top climate scientists Richard Betts, who said the credibility of science would be diminished if campaigners plucked numbers from thin air (see below). The row hit levels of absurdity on Sunday when Thompson accused Betts of being “insane” in the Daily Mail.

More on when we might really get to 4C, what it might mean, and why I think it’s a bad idea to exaggerate this https://t.co/XEvlugqS3B