What could a legally binding UN climate deal look like?

Countries agreed to target a ‘legally binding’ climate pact in 2011, but four years later it’s still not clear how it will work 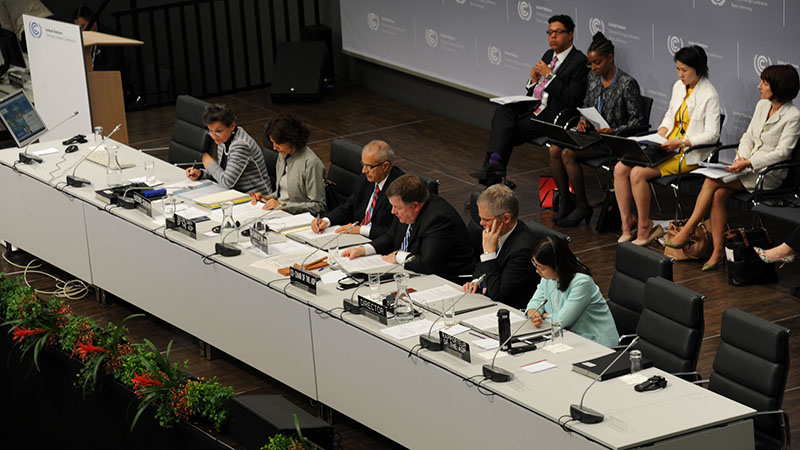 A mooted UN climate pact could end up working like a credit ratings agency, say influential figures involved in crafting a Paris pact.

Countries that default or break their pollution cutting promises will lose credibility and trust amongst their peers, which will impact them in other venues and on other issues.

Rogue climate states (Canada) could miss out on benefits such as protection from trade sanctions, or “in club” transfer of low carbon technologies.

The suggestion was one of a series set out during a session hosted by the London-based E3G think tank last week.

Close observers of UN talks say little time has been spent exploring how binding certain elements of a Paris pact will be.

As a result think tanks are working overtime to test out options on negotiators, NGOs and journalists.

The session was held under the Chatham House rule – so names are off-limits. But the building blocks of what an agreement could look like did become a little clearer.

The central message here was that countries and those implementing national policies need assurance that others will meet their promises.

A binding deal with a clear benchmark for compliance has “teeth” and makes it less likely governments will continue to argue about commitments after it is signed.

It’s also seen as a litmus test by which the general public and business can assess whether a long-term transition to a low carbon economy is likely.

“If governments are serious about addressing climate change, why wouldn’t they bind themselves to the most convincing level?” said one participant.

But does this require a new treaty? Perhaps not, others argued.

There appeared to be a consensus that judging whether Paris is a tough deal will not simply swing on whether a new treaty or protocol is developed.

The legal form of a deal is one way of determining how binding it is. But so too is language, how specific pledges are, and the institutions that are created as a result.

Climate hawks hope countries will commit to a tough new regime under a legally binding treaty in the French capital.

But support for a deal with some legal options but without an overarching UN treaty has support from the Australia, Japan and New Zealand.

The US government is also holding out against a new treaty as it would have to get it past a hostile Senate. There’s small chance of that says Republican senator Jim Inhofe,

What’s emerging is an endgame that’s not an either-or. Some decisions in this new treaty or agreement could be binding, others could not.

Non-binding agreements could come under the UN’s regular decision-making body, the Conference of the Parties, and become part of its wider rule book. 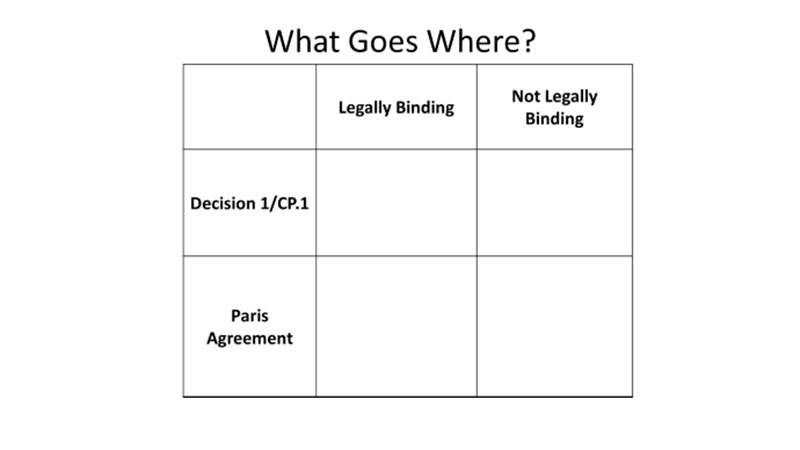 The current negotiating text stands at 80+ pages, but six elements stand out when discussing what will (or will not) be legally binding.

So what’s the chances of these becoming “legal” commitments?

Long term goal: The concept of a zero carbon goal has come from nowhere in mid-2014 to lead the pack, an astonishing development supported by the G7 in June.

Some countries already have long term targets. The UK, for instance, has a 2050 goal to reduce emissions by at least 80% from 1990 levels.

“All you need is a long term goal and the sounds of commitment; after that people will do it in their own way,” said a former UK advisor at the meeting.

Others want more. Track Zero, an influential lobby group, wants emissions from fossil fuels to fall to zero (or net zero) by 2050.

But some emerging economies are less keen. India and China worry mid-century is too soon; top oil producers like Venezuela and Saudi Arabia see this as a red rag.

One envoy closely involved in the talks fears China may leave its objections to the last night – and then get a proxy like Malaysia to protest against a stringent goal.

Verdict: A goal looks likely, but it’s unclear what the % or baseline will be.

China, the US and EU are all in. India, Brazil, Australia and Japan are not – although all have said they will have their data with the UN before a nominal 1 October deadline.

Most taking part at the E3G event agreed that specific numbers covering emission cuts will not come under a legal deal.

“They won’t be in it,” said the former UK advisor, but suggested that there will be a rule that they can only get more ambitious.

It seems unlikely the US or China would agree to their respective commitments coming under international law.

Verdict: Not legally binding but possibly part of a COP deal.

The French hosts of COP21 say this is one of the four “pillars” of the proposed Paris deal, exhorting fellow developed governments to chart a finance roadmap.

But it seems unlikely that the US, EU and others, who in 2009 promised to deliver $100 billion a year by 2020 in climate finance, would agree to long term financial hand cuffs.

In addition, the private sector seems destined to provide the bulk of the trillions predicted to be needed in low carbon investments by 2030.

Verdict: Not legally binding but strong language in the final Paris text.

Transparency, accountability: The ability to track what carbon cuts countries are making and assess how they are faring compared to others could make or break this agreement.

Known as MRV (measuring, reporting and verification) in UN jargon, its inclusion in a legally binding pact is a central part of the EU’s negotiating strategy.

“Accountability mechanisms that are established to track compliance also determine the degree to which obligations can be considered binding,” said one of the E3G participants.

Rich and poor countries currently report on their emissions in separate UN streams – that’s unlikely to change in the near term with many developing countries keen to stress their different status to developed nations.

The EU and US are keen to set a timetable for carbon cutting commitments to be periodically ramped up, as technology (hopefully) improves.

It’s unclear what India and China really think about these commitment periods – and they are known to be sceptical about MRV, not wanting their struggles or possible failures to be widely publicised.

Verdict: For a tough deal, this needs to be legally binding.

Pre-2020 ambition: Remember the Paris deal will only start in 2020 and there’s little sign of more aggressive carbon cuts in the next five years.

To have a chance of limiting warming to below the 2C ceiling deemed dangerous by governments back in 2009, global emissions need to peak by 2020 and be halved by 2050.

For small island states and vulnerable African and Asian countries, pre-2020 action is a red line. For major emitters, it is an inconvenient truth to be ignored.

Verdict: Expect a commitment to pre-2020 action but little else.

Non-state actors: This is the wildcard the French hope can help spur greater action both before and after 2020… pledges from cities, regional authorities and business.

By 2045, six billion people are expected to live in cities – which generate 80% of global economic output and use 70% of global energy.

In the past two months, the French government has hosted business and regions summits, designed to offer leaders in these sectors space to voice their ambitions and policies.

But would cities or business accept obligations under international law? It’s unlikely and impractical.

Verdict: Expect strong language on their importance, with no legal weight.