Top hydrocarbon producers seem to accept a global deal will be done in Paris – the question is can they limit its damage? 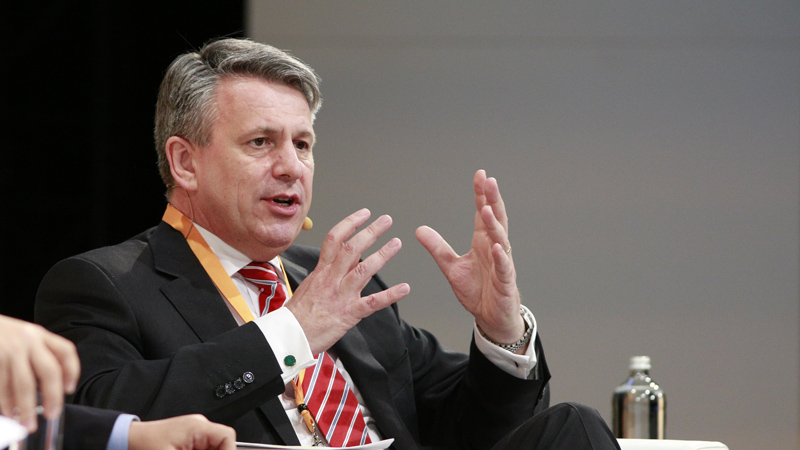 Shell CEO Ben Van Beurden is one of the signatories on the letter to the UN’s climate chief (Pic: Shell/Flickr)

More likely Sepp Blatter resigning in the wake of FIFA’s corruption scandal, Tony Blair making a speech at a hunger summit for free.

But that’s what happened on Friday when the heads of BP, Shell, BG Group, Statoil, Eni and Total wrote to Christiana Figueres.

“Climate change is a critical challenge for our world,” they said. “We stand ready to play our part.”

The chief executives emphasised the importance of a global price on carbon, and their willingness to work with the UN to make this happen.

“If governments act to price carbon, this discourages high carbon options and encourages the most efficient ways of reducing emissions widely,” they added.

What makes this incredible is that for years many fossil fuel companies have worked government contacts to slow UN talks, or funded think tanks to discredit climate science.

Now six of Europe’s top hydrocarbon explorers have apparently torn up their playbook, asking instead to be at the table when the world seals a global climate pact.

This is no overnight strategy change. Oil and gas firms work on long timelines and need to constantly reassure shareholders over their plans.

The signs that many top businesses were planning to work with rather than against the UN process has been on the cards for nearly a year.

There they heard Al Gore, California governor Jerry Brown and the head of French utility GVF Suez speak about the potential for change and the role of carbon pricing.

“That emblazoned in senior leader’s minds that getting a price on carbon and pricing right was a priority,” Forrister told RTCC.

“I’m sure people went back and asked what are we doing in this field… and we’re starting to hear this from a chorus of voices.”

This wave of support for pricing continued into last month’s business and climate summit in Paris.

The organisers there expected a debate on the role of markets, instead says Rachel Kyte, World Bank special envoy on climate, they were blown away by the level of agreement.

Even Tony Hayward, head of Glencore-Xstrata, the world’s top supplier of power station coal, said pricing was essential. “The sense that there is growing inevitability on a price on carbon is coming from the business community,” said Kyte.

Nigel Topping from We Mean Business – a network of global low carbon trade groups – agrees the scale of interest in costing carbon has been rapid, and one fossil fuel companies have had to follow.

“To say as a businessman you are against a market instrument against pollution is perverse… the question is what price, where and when?” he said.

But why now, and why this letter? Tom Burke, advisor to BP from 1999-2001 and chair of environmental think tank E3G is in no doubt. It’s fear.

“They are getting worried. They are beginning to think governments will bend to respond on pressure on climate change more than they thought they would,” he says.

“They assumed governments would not do enough to stay below 2C [a temperature level the UN agreed to avoid in 2010]. It’s unprecedented and a sign they are nervous.”

The letter is a sign, argues Burke that work exposing the risk of “stranded assets” as a result of climate policies that make fossil fuels unusable is starting to hit home.

Previously friendly institutions have also started to cause trouble. The G20 is investigating financial risks from high carbon investments. The IMF says subsidies for fossil fuels will hit $5.3 trillion in 2015.

Governments are getting worried that the $6 trillion of investment in coal, oil and gas in the past 10 years is storing up trouble, debt and black holes for pension plans.

“This is trying to reassure investors their money is safe and they have a game-plan to get through this,” adds Burke.

Others factors are at play. A global campaign to encourage investors to divest their fossil fuel holdings is starting to gain significant backers.

Until a few weeks ago its major success stories was a string of top universities pledging to ditch coal, oil and gas assets in the US and UK.

In the past fortnight French insurance group Axa said it will ditch €500 million of coal assets before 2016, citing climate concerns.

Norway’s $900 billion sovereign wealth fund is set to follow suit after a parliamentary committee backed calls to reduce its exposure to coal, the world’s most polluting fossil fuel.

“What a lot of those companies are underestimating is the rapid divestment campaigns going on around the world,” said Martijn Wilder, head of environmental markets at law firm Baker Mckenzie.

“While some people say they are around the fringes the reality is there are some very big names saying we’re going to get out of fossil fuels and change the things that we do.”

The timing of the oil firm letter release is critical. Over 190 governments are meeting for the next two weeks in Bonn, Germany to work out the framework for a global climate deal.

It’s due to be finalised in Paris this December, but the text is far from decided and the politics uncertain. All that’s clear is that most world leaders seem committed to getting something.

And while many critics may write the letter to Figueres off as greenwash, the six firms have done their homework.

Shell’s climate advisor David Hone has been busy working with colleagues at IETA on a proposed carbon pricing text that could sit in the Paris deal.

He says there has been an “enormous leap” in carbon pricing interest from businesses in the past 10 months, and wants to see a “marker” in a Paris agreement for the role of a global carbon market.

Hone uses the growth of the internet from the 1990s as an example for how markets could grow and steadily link without any over-arching UN laws.

He imagines a network of markets which are based on similar “plug ‘n’ play” criteria, allowing independent schemes to starting linking together over the coming decades.

“There is an underlying concern you could have a $50 [carbon] price in one place and $3 in another, and over time that changes the terms of trade between those two regions, and that’s a concern,” he said.

“Linking and harmonising the price gets past that and I think if we can do that we can get a lot more support for carbon pricing.”

It’s unclear what traction IETA’s “straw proposal” will get as Paris approaches. The two men who headed up its steering group, Hone and PwC’s Jonathan Grant, have limited expectations.

But interest in pricing and markets is set to rise – especially given the official launch of China’s national emissions trading scheme in 2016.

India is also interested in engaging in “technical” discussions on how markets would work, revealed the World Bank’s Kyte.

She thinks it would be “bizarre” if there were no mention of a carbon price in a 2015 pact. “Stronger messaging out of Paris is important,” she said.

Still, renewed focus on the role of oil and gas companies and the potency of carbon pricing has risks, says Burke, who describes the move as a “shield to delay action”.

“The price of carbon does not affect their investment decisions… the price of money is more important and that’s why they are trying to persuade investors they have a long term plan,” he said.

Equally, most green groups who have spent decades chasing the likes of BP and Shell around the world are unlikely to buy into the idea of executives having a seat at the Paris talks.

For her part, Figueres has gone public in her desire for oil and gas leaders to finally come to the party as partners rather than the comedy villain.

Last week she issued a passionate call for campaigners to stop “demonising” fossil fuel companies. It was time to “stop pointing the blaming finger” she said.

Figueres – who seems more confident on the economic case for climate action that she did two years ago – may also feel she is in a position to be magnanimous to her former foes.

Exxon-Mobil, Chevron and Peabody are still raging against the dying light, but Baker Mckenzie’s Wilder says many can now see the writing on the wall – albeit in the distant future.

“For some of the big companies – the oil majors and big coal – the question is what are we going to be in 50 year’s time?” he said.

“Are we going to exist? Will we be different? Diversified? Those are the challenges these companies have to start asking themselves.”